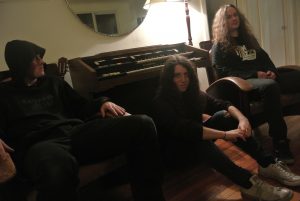 Musically, Tarot wants to capture the same mystical atmosphere created by bands like Rainbow, Uriah Heep, Deep Purple, Wishbone Ash et al, all the while putting their own spin on things. “I think we have our own sound that incorporates these elements”, The Hermit believes, but words are also important. “In my opinion the lyrics of Tarot are better left to the listener to interpret in their own way, as for me they are trying to hint at something that cannot truly be expressed with words. This inexpressible element is what really drives the creative force behind Tarot, both musically and lyrically”.

With the first full-length album completed under the title ‘Reflections’, Tarot are ready for a bigger step. “To us it is the most accomplished Tarot material to date, and carries on where ‘The Warrior’s Spell’ left off. Expect epic, winding passages, lots of Hammond organ and synths, big guitar solos and soaring vocals. I think this album features our strongest songs so far, and the whole thing flows as one solid album, which is something I think ‘The Warrior’s Spell’ lacked, since it was a compilation of tracks recorded in different sessions”.

Based on the other side of the globe, this complicates things somewhat and that might be a step back for the young group, especially since they haven’t performed live. The Hermit is very clear on that touchy subject by saying “We would like to expand the line-up of the band to be able to perform, but it has not been a priority, as we prefer to focus on writing and recording songs. Australia’s isolation certainly makes things difficult in regards to touring, the costs associated with bringing an entire band to the US or Europe often makes it completely unfeasible for Australian bands to play overseas, and Australia doesn’t have the same kind of die hard festival scene that you find in Europe, but I still wouldn’t say Tarot will never play live or tour, only time will tell.”

The Hermit also keeps himself busy in other underground heavy metal bands from his hometown of Hobart, Tasmania, such as The Wizar’d and Dracula. “There are quite a lot of really cool bands in Australia at the moment, such as Outcast, Convent Guilt, Ironhawk, Demons Gate, Teuton,” he says, “but as I mentioned earlier, the way shows work here is quite different to how it is in Europe. Australia is a big country, with small pockets of people who are into this kind of music spread over a huge area, this tends to make shows fairly small, and you don’t see the kind of fests that seem to happen every weekend in Europe, just because it takes such a long time to get from one city to another.”

However, as he concludes; “To be honest I think playing this kind of music is better than it ever has been for underground bands. This is because with the internet the way it is, it has become possible for bands to operate outside the confines of the real music industry (which is something I have no time for whatsoever), but still put out quality releases that get distributed straight to the fans, and bands can still play cool shows. I don’t think underground music needs the traditional industry to exist, and the further the divide becomes between the two, the better.”

The new Tarot album ‘Reflections’ will be released on CD in late January by Heavy Chains Records, and on LP later in 2016 by Ván Records.