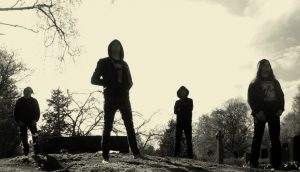 With new album ‘Darkness Drips Forth’ out now on Relapse, we sent Kat Gillham to interview Hooded Menace mainman Lasse Pyykkö, also of Claws and Phlegethon. With Hooded Menace clearly his main band these days we asked the Finnish master of doom about letting other people in on his long-running death/doom project and when we can expect his twisted dark vision to hits the road again

Your new album ‘Darkness Drips Forth’ was recently released on Relapse Records, please tell us a bit about it?
“Well, I’d say ‘Darkness Drips Forth’ is our slowest and heaviest, but also the most melodic work to date. There’s stuff I can’t imagine being put on a record during the early days of the band. I wouldn’t have been ready for it. The new album goes from extreme to extreme, basically. Just don’t expect blastbeats, that’s not our thing, really. We don’t need extreme tempo shifts to be extreme. We play with smaller nuances than that, and as a songwriter, I find this more restrained approach a lot more interesting and challenging. Of course there’s also some stuff to bang our heads to, but compared to the previous albums, this one’s a crawler. And when it’s slow, the songs tend to grow in length.
“With the benefit of hindsight, I guess we were already moving towards the lengthier song formula on the latest EP’s; the split with Loss, and ‘Labyrinth Of Carrion Breeze’, so it’s not something that happened overnight or something we just decided to go for. And I certainly can’t tell if it’s going to continue on the next albums. I only wish we could successfully refine our sound a little bit in the future as well, even if to some it’ll always be just more of the same [laughs].”

This is the first ever Hooded Menace album recorded with a full line-up as in the past it has been only yourself and Pekka [Koskelo, drums], so why did you decide to do things differently this time and include two long time live members Markus [Makkonen, bass/vocals] and Teemu [Hannonen, guitar]?
“Prior to the album, the split EP with Loss and the ‘Labyrinth Of Carrion Breeze’ EP were recorded by the same four-piece, and since the sessions were rather encouraging experiences, it was clear that we we’re going to take it to the new album as well. If I have guys playing in the live band, why not have them play on the records as well if it sounds right? It was never an intention to make Hooded Menace albums as a duo. We just didn’t know anyone who could fit in. Markus and Teemu bring their own playing style and touch to the performance, so it’s bound to sound a tiny bit different as opposed to me doing all the strings, and I think that’s not a bad thing. Maybe it sounds now more like a real band playing… at least it should [laughs].
“It’s not like they add their own ideas much at all, but pretty much just play the guitar/bass-lines exactly as I composed them, and seem to be happy doing so. We’re not a jam band and everyone in the band is aware of that. All the songs are fully composed and well-thought already in the demo stages, so there’s not much to add, but of course I’ll be all ears for any suggestions.”

You recorded the album in England at Skyhammer Studio, why did you choose that studio and how was the overall experience of recording in England?
“Well, after Steve Mills from The Wounded Kings told us good things about [producer] Chris Fielding, we hooked him up to mix/master our song for the Loss split so we could gain some experience from working with the guy, even if it was with distance through the internet. The split session turned out quite fine, but we all knew that in the future, we should get in the same room instead of sending files and comments via internet, and that’s what we eventually did.
“Chris has a pretty impressive CV from Electric Wizard to Primordial, so we thought it would be interesting to give him a try for the full album, especially as we had already been through a satisfying session with him on the Loss split.
“I don’t think we necessarily needed a change in sound engineer, or whatever you wanna call it, because we’ve done good job on our own with our usual sound engineer, Mikko Saastamoinen. So, I guess we went to Skyhammer because Chris knows his doom, and it was an exciting idea, and because we could.
“So in April we flew to Chris’ hideout in Cheshire and returned a bit later in the same month with the mixed album. At home we figured we were’t completely happy with the mix, so I headed to Transistor Studios here in Joensuu to remix the album with Mikko. It was pretty tough, and we had to finish it fast if we wanted to stick to the original release schedule. Somehow we pulled it off. Mikko’s input and effort on this record is not to be underestimated. Chris is a great guy, but we should have had more time to make the best of it. We are not used to a race against time. It was a conscious risk from us to step outside of our comfort zone and try to do things differently, and with more time in our hands it could have been a great idea. Anyways, Chris managed to capture sounds that made the album professional, warm, massive, and just downright heavy.”

Tell us about the album title and the lyrical subjects on the album?
“The title comes from an old work by the visual artist Justin Bartlett. I really liked it and thought it would make a great song and/or album title. It just stuck with me, and when we finally got Justin to do the artwork for our album, I asked him if he was okay with us using the name for our album title. I think it portrays our music perfectly and sits well with the lyrics that are this time around a lot more abstract and surreal, but still maintain the dark essence and horror so synonymous to the band. I wouldn’t want to try to explain them much, but rather let the listeners interpret them in their own way. However, I can tell you that some of the stuff is – surprise, surprise! – inspired by the Blind Dead movies. It’s just a very different kind of approach than before. Our bassist/live-vocalist, Markus, put it best by saying something like: ‘If the old lyrics were like shorts novels, the new stuff is a painting’.”

Who did the artwork for the new album and why did you choose this particular artist?
“Like I mentioned, it’s Justin Bartlett [who has worked with Sunn O))) amd Trap Them]. We already asked him for ‘Effigies Of Evil’, but he wasn’t available, so we hooked up David V. D´Andrea for the task who did an amazing job indeed.
“I’ve been a big fan of Justin for quite some time, and I thought his unique style would bring a very demented and deranged quality to the ‘Blind Dead’ themes we have always had on the album covers. It was supposed to be something different and also a bit weird so it would resonate with the album’s lyrics. He doesn’t do record cover stuff much at all anymore, so we considered ourselves really lucky to have him on the board. Brutally honest, the art didn’t turn out exactly as we hoped – our expectations might have been too great perhaps – but it does the job just fine. It’s got Justin’s usual disturbing vibe, people seem to dig it, and I’m still a Bartlett fan.”

You headlined in the UK last November how did you find that experience and can we expect a return to these shores anytime soon to play in support of the new album?
“It was pretty good, despite the fact that we were dead tired due to an early flight and a very little of sleep, plus we had a late show time. But that happens every now and then really, and it’s gone as you’re about to hit the stage. We’ve no plans for UK as we speak, but since it’s pretty good ground for us, I could imagine doing a UK tour one day.”

You recently did your first full European tour with Mourning Beloveth and Shores Of Null how was that experience for you?
“Two or three of the shows out of ten were not so good, but the rest were very good or great. Some of our best perhaps. We were a little worried how it’s going to be because this was our first proper tour, but it was fine. The biggest problems was lack of sleep because of the late show times and early wake ups. We’re getting old, you know. The other bands were really good blokes and easy to tour with and everything was handled professionally by the tour manager Jose from Doomed Events. Of course, for slightly antisocial persons like some of us in Hooded Menace are, well, having people around you all the time can get a little annoying, but all in all it went surprisingly well. No on bothered anyone and we made good friends during the trek. I’d say 10 days with no day offs is pretty much the max what we could do. Maybe less, really. But it all comes down to what kind of offers come our way. So, long story short: we won’t be splitting up or giving up on touring [laughs].”