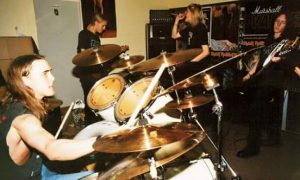 It is currently unclear and undisclosed what happened but the extreme music scene has lost a great drumming talent at such a young age.
Oscar first came onto the worldwide album scene as a teenager with Gates Of Ishtar and played on two of their three albums that were released very close together in the mid to late ’90s; the 1996 debut ‘A Bloodred Path’ and the band’s third and final album before they prematurely broke up, 1998’s ‘At Dusk And Forever’. The band’s debut is regarded by many as one of the finest examples of melodic Swedeath, mixing the razor sharp riffing and melodies much like their countrymen Dissection, At The Gates and Unanimated with the galloping heavy metal and harmonies of classic Maiden with Oscar’s impressive drumming driving the songs along. All three of the band’s albums have achieved a cult status and this year the band were due to celebrate the 20 year anniversary of ‘A Bloodred Path’ at the world renowned Party San Festival in Germany. It is not confirmed if that will or will not take place now in light of the tragic and sudden loss of Oscar who was active with the band again. However, this is a cruel twist of fate in what should be a year of nostalgic celebration for the underrated Luleå-based band.

Oscar has been involved with many other bands throughout the years, also contributing his signature drumming style to recordings and albums by the likes of The Everdawn, The Duskfall, Helltrain, Defleshed, Sarcasm and achieved varying degrees of success and worldwide recognition with those bands.

But his invaluable contributions to the extreme music scene didn’t stop there, Oscar also played drums in popular Swedish hardcore band Raised Fist, his energetic and powerful drumming being one of the standouts on the band’s widely acclaimed ‘Dedication’ album, which was released in 2002 via the legendary Burning Heart Records label. This album is one of the most well-known he has played on in his 20-plus year career. He contributed drums to two Raised Fist albums in his time with the band.

The band posted this tribute to Oscar online: “Oscar, our dear beloved friend, brother, and the love of someones life. In a few days, you were going to be a father. A few days ago, we heard your laughter around the rehearsal rooms, full of life. Now, you’re no longer among us. We wrote magical songs and even travelled a few times around this Earth together. Raised Fist will never be the same without you. Your sound will live for ever. Our thoughts are with you and your family. Rest in peace our beloved friend.” 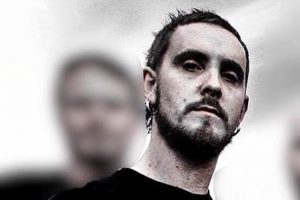 As well as being active again with Gates Of Ishtar, Oscar had also recently become active again with another old band he had been involved with back in the early-mid ’90s, namely melodic death metal band Sarcasm who recently had a discography album released by well respected US label Dark Descent featuring their demo recordings amongst other things. On the back of this release they decided to become active again and have been writing material for a new full-length album.

Niclas Svensson, Oscar’s Gates Of Ishtar bandmate told Iron Fist: “I didn’t first believe it when I got the bad news. It’s so unfair! I didn’t see Oscar that often these last years but we have been through so much together and were still in contact every now and then. Just a couple of months ago he sat beside me at another friend’s funeral in Luleå. We had a few beers together later that night talking memories. This is just so sad and unreal.”

The music scene has lost some big name players in recent weeks but it is also very important not to forget the valuable contributions and recordings of the underground musicians who have also left us with a great musical legacy. Oscar Karlsson would have had a huge impact on thousands of extreme music lovers and fans across the world and the debut Gates Of Ishtar album became one of the regular soundtracks to my early 20s years and is an album I have revisited many times since.

Oscar played on at least 15 full-length albums which is an impressive feat for someone still so young and with still so much more to give. Iron Fist would like to extend our condolences to Oscar’s friends, family and bandmates.