METAL CHURCH INTERVIEW: “THERE IS NO EXPIRATION DATE ON US OLD ROCKERS” 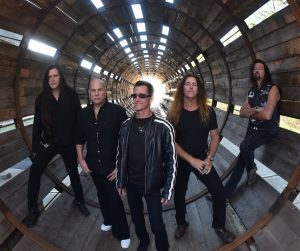 Born out of the West Coast thrash metal scene of the ’80s, Metal Church quickly became one of the standout talents of US metal. The journey started in 1982 and after all these years, countless line-up changes and some of the best US metal albums, singer Mike Howe (1988 – 1995) returns to the Church with new album ‘XI’ and some unmissable live shows. Iron Fist grabs the chance to speak both to Mike Howe (vocals) and Kurdt Vanderhoof (guitars) about the new album, almost hiring Lars Ulrich and going back to being DIY

Welcome back, Mike! When did this famous phone call happen that brought you back to the fray?
Mike: “I received a phone call from Kurdt in the fall of 2014. It took many conversations about how we would approach the new album before I would agree to do it and I am very happy that it has worked out and we are incredibly happy with the end result of our collaboration. I hope the fans agree.”

What have you been doing all these years?
Mike: “Living a happy life with my wife raising two boys.”

When and why did you decide that you should rejoin Metal Church?
Mike: “After Kurdt and I worked hard on the new material and it was something we could feel proud of, that is when I committed to the return of touring. That was over the course of a year.”

The album is really amazing. To be honest, I had big expectations and you didn’t fail me. How was the writing and recording procedure for ‘XI’?
Mike: “Thank you. The writing and recording was a great experience. It was just Kurdt and me in his studio at his house. There were no outside pressures or expectations. We just rekindled an old friendship and writing partnership right where we left off. We both felt like kids again. It was an invigorating and rejuvenating experience that I am so grateful to have had at this time in my life. After the writing sessions we all came in and played our parts. The band did a great job laying it down.”
Kurdt: “I’m very glad to hear that! Thanks very much! It was exactly like the last time that Mike and I wrote together. That was one of the most appealing things about doing this record, it was Mike and I working together in the best of situations. We didn’t have to have anyone outside the band telling us what we should do.”

At first it was announced the new album ‘XI’ would be released by US-based Rat Pak Records, but Nuclear Blast got in the game, for Europe. What’s your relationship with these labels?
Kurdt: “We are on RatPak records and we just did a licensing deal with Nuclear Blast. Well, working with Nuclear Blast is great for us because of the massive distribution in Europe. It will certainly raise the profile of the band and we will know that the record will be where it needs to be.”

Some amazing live shows have already happened. What’s the reaction been like?
Mike: “Amazing! I never thought that there would be such a huge reaction to my return. But the fans have been so generous and I have been so humbled and grateful for all the love of the Metal fans. I am the luckiest guy alive right now.”
Kurdt: “Amazing really! Especially since we had a major emergency the day before the very first show. Rick Van Zandt had to go in for emergency eye surgery the night before the first gig so we flew our friend Paul Kleff in from Detroit the morning of the gig. He did the following shows with us and really saved our butts! So the only way the first shows could have been any better would be if Rick could have been there.”

You’re playing some legendary but intimate venues like the Underworld in Camden, London on May 10 but also mega metal festivals like Wacken, which do you prefer?
Mike: “Small venues are always more personal. You can be up close to the fans and really experience the music together with them.”
Kurdt: “Both can be great for different reasons or they can be horrendous for different reasons. I can’t pick between the two to be honest. I like both just as long as I know that the band sounds good and that the fans are happy.”

Kurdt, in a way, this is actually the first time you are playing with Mike Howe, right? During the Howe-years after ‘The Dark’ (1986) and until ‘Masterpeace’ (1999) you were the songwriting driving force, but you didn’t record or tour with the band.
Kurdt: “That’s right, and one great thing about the band now is that Mike and I get to perform together, be in the band together and not just work in the studio.”

Let’s go back to the past. What are your most fond memories of vocalist David Wayne, who sadly passed away in 2005?
Kurdt: “Recording the first album with him. We had no idea what he was really capable of until we heard it in the studio.”

What’s the Metal Church/Metallica connection? There is a rumour that Lars Ulrich was playing with you back in the age of dinosaurs (or 1981 to be more specific).
Kurdt: “We never actually played together. I was living in SF and trying to put Metal Church together and he had just come over from Denmark. We talked about him playing with us but he was on his way to LA to live with his father and… the rest is history.”

Your eponymous first album was originally released by Ground Zero in 1984 and after successful sales you signed with major label, Electra who re-released one year later. Do you think a band like Metal Church can reach again those kinds of sales numbers and how do you see the music industry today?
Kurdt: “I don’t think we will sell those numbers again, at least in physical sales. But then again, no one really sells the big numbers any more. But the way the new industry is, you don’t need to sell as many copies to make the same amount of money. It’s all very DIY which I really love that. Direct artist to fans and that major label filter is gone so there is no expiration date on us old rockers anymore [laughs.”

What does the future holds for the worshipers of the Metal Church?
Kurdt: “Well, we have lots of gigs and travelling coming up and we’re going to be as active and productive as we can.”
Mike: “The future is here! Through the new album and the upcoming tour we’ll get to come together with the fans of metal and celebrate its beautiful connecting power. I can’t wait.”

Metal Church’s new album ‘XI’ will be released on 25th March via Nuclear Blast. They will be playing a show at The Underworld London on 10th May