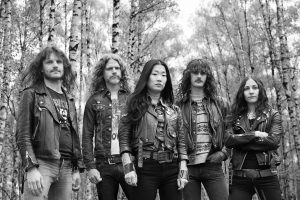 When did the idea for Night Viper first come about?
“I have often wished that Metallica and Slayer could have held off from maturing for just one album more each. I love their second albums and what came later too, but I love the freshness of that almost rock ‘n’ roll style of thrash metal that they both had in the beginning. I’d often thought I’d like to do something with that kind of vibe, although I doubted I’d ever get around to it. At one point I was going to ask Sven, the drummer from Antichrist, to just do a single with me so I could get it out of my system. I couldn’t be happier that I’m able to do it for real now, though.”

What was the catalyst and inspiration for forming the band and what made you want to play such a style of music?
“Well, the band pretty much happened by accident. Sofie Lee, our singer, was trying to get something started with a guy called Martin, and someone said, ‘why don’t you ask Tom?’ I was new in Sweden and just saying yes to everything to see what would stick. They weren’t super clear what they wanted to do, but I think it was supposed to be hard rock, but catchy. Kinda like ‘Barracuda’ by Heart. I tried to write like that, but it came out sounding like how Night Viper sounds. Martin didn’t end up staying with us, and Sofie Lee and I went straight to what was natural for us, which was tough but very catchy NWOBHM/speed metal. If I strap on a regularly-tuned guitar, this is what comes to me most naturally.”

What do you get from playing this music personally that you don’t get from playing other styles?
“Well, I guess this is the style of music I’ve been playing the longest, actually. The first songs I ever learned to play on guitar were Metallica and Sepultura songs, so I get this great sense of joy that I can finally write and play this kind of music for myself. Funny that it’s taken so long! I guess something I get from this is just the pure adrenaline rush of playing the most headbangable riffs I can think of, and just throwing as much energy and passion into it as I possibly can. I love the way complicated but catchy riffs feel in my hands when I play. You know some riffs sound great, but also feel great in your hands? It’s great to do all that at speed, and just see the heads banging out there.
“All the bands I play in or have played in have been energetic, but Night Viper is the purest of all in terms of just total heavy metal sweat and fury.”

Your debut album recently came out on Svart what can the readers expect from it?
“Tons of energy, classic feel, and very catchy songs. It’s really important that the songs work really well as songs and not just as collections of riffs. It’s very organic-sounding. We recorded all the basic tracks together as a band, so the excitement is really audible. There’s some good spooky stuff on there as well to add some colour to all the denim and leather that’s going on.
“It’s classic metal, but I think we’re unique too. Sofie Lee is a really special singer. She has such a great grain to her voice, and her melodic sense is killer.
“The width of the influences have made us sound different, I think. Jonna, our drummer, had played mostly ’70s-style hard rock before she joined the band, so she swings like mad. It’s almost like Priest’s ‘Sin After Sin’. Metal riffs with totally swinging drums. And Emil, our now-former guitar player, is an amazingly talented folk musician. His harmonies and solos are really different to what you would expect in a regular heavy metal band, because he approaches things in such a unique way for a metal guitarist.”

How did the deal with Svart come about?
“Well, Jarkko from Svart knew me from my time in Church Of Misery and from my band, The Order Of Israfel, and when I started posting stuff online about Night Viper, he must have checked it out. He actually just offered us a deal, and after looking at a few options, we said yes. The fact that they’d done Reverend Bizarre releases went a long way with me. I worship that band.”

Where was it recorded/mixed? Why did you choose there?
“We recorded it here in Gothenburg just near where we rehearse, with a guy called Oscar Karlsson. Our bass player, Ruben, had recorded with him before with his crust band, Swordwielder. That was the connection. Oscar is obsessed with Entombed and Dismember just like I am, so we got along very well. We just knew he was an easy guy to work with, and would understand that we wanted an organic, almost garagey sound, and wouldn’t try to overproduce the band.”

Why the name Night Viper?
“Well, we were just looking for something catchy and easy to say. A bit dark, bit a bit slick too. A name that sounds like black leather looks. And snakes are a good image to play with. We’re very happy that it has turned out to be a fun name to shout. People seem to enjoy shouting it at us!”

Lyrically what inspires you to put pen to paper?
“Sofie Lee and I have done a couple of songs together that tell a story. Almost like horror stories. The rest were all written by Sofie Lee, and are based on her life experiences. Either rage at things that have been tough, or celebrating the battles she’s won and the good changes she’s made in her life. She has said that there’s plenty of venom still in the tank for all the future songs we’re going to write.”

You are an active live band, what can people expect from a NV show?
“Easily the most common feedback we get from people is that we seem to be just having the best time ever on stage. Which is absolutely true! We are really the best friends, so what you’re seeing is people who love each other’s company doing what they love most. We’re very very energetic on stage. It’s actually very joyful. Jonna has been called ‘the happiest drummer on the planet’ more than once. What I’ve noticed is that total life-long metalheads really like us and understand what we’re about and all the history behind it, but that regular rock people really dig it too. I guess they’re responding to that energy on stage.”

Will you tour much to support the album?
Absolutely! We’re looking at April and May right now. We’ve got at least one festival already confirmed, but the details will come out a bit later. Everyone in the band is very passionate about the band, and we want to play as much as we can. We want to tour forever.”

How was your recent Euro tour? And when can we expect the venom to strike UK?
“It was really awesome. Our great friends, Demon Head from Copenhagen, asked us to go with them, and we had a great time. The fact that we could tour when all we have out is a 7” makes us feel very lucky. I would say Leipzig, Berlin and Copenhagen were the highlights for me at least. Our friends in Indian Nightmare were at the Berlin show, and they definitely led the charge at that one. We of course would love to get to the UK as soon as possible. Perhaps some dates with Angel Witch or something?  Guys?  Whaddaya say?!”

Sweden has a great metal scene, are there any other current Swedish bands you feel an affinity with? Why do you think Sweden has produced so many quality heavy metal bands in recent years?
“Well, there are some real reasons as to why Sweden produces good bands. There’s government support for bands in paying for rehearsal rooms and things. You can specialise in music in high school here. Also, there’s my ‘bad weather = good metal’ theory. I always figured that there weren’t so many good metal bands in Australia, where I’m from, because the weather’s too nice, and everyone wants to go outside. In Sweden it’s freezing a lot of the time, so it’s a good reason to stay inside and get creative. Actually, I was in Florida, and I thought my theory had some holes in it, because of course Florida has warm weather and also provided a huge number of the greatest death metal bands of all time. But then someone explained that it’s actually way too hot, so no-one wants to go outside there either. So, the theory still works, I think! Yeah, we’re of course close to a lot of bands here; Antichrist, Tribulation, Nightmare City, Dead Lord, Bullet, etc. We’ve played with lots of different kinds of bands here, from the DIY-est punk bands to Graveyard.”

Last words are yours!
“Thanks for checking us out! One grade A bangover to each headbanger absolutely guaranteed. Night Viper in the night!”