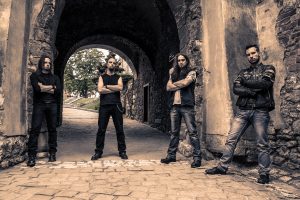 Introduce yourselves, ye humble knights of doom…
Hails Iron Fist! We are Monasterium – a brand new Polish band formed in 2014 and dedicated entirely to epic/heavy doom metal. Doom metal in its traditional form has always been our passion and we believe it’s actually one of the noblest genres of music in general – that’s why we follow this path.

How did you come up with the band’s name?
We longed for a name that’s meaningful, powerful and at the same time carries all the mystical and spiritual vibes present in our music and lyrics. Unfortunately Candlemass has already been taken, so out of all the ideas we came up with, Monasterium seemed like the best choice.

Your first same-titled album is coming on May 27th. Give us the complete details of ‘Monasterium’…
Our eponymous debut album will be released by No Remorse Records on both CD and LP. The album consists of seven hymns of doom that should take you to a dense and epic journey though spiritual worlds, medieval history and religion. Expect classic metal sound, lots of crashing riffs and haunting melodies. In other words – metal as pure, heavy and unforgiving as possible.

Which are your five favourite doom metal albums?
Hard question. It’s quite tough to pick your top five going through Black Sabbath or Candlemass discographies only, let alone the whole genre. But okay, here are the five albums are definitely among our favorites: Candlemass ‘Nightfall’, Black Sabbath ‘Headless Cross’, Manowar ‘Into Glory Ride’, Grand Magus ‘Iron Will’ and Solitude Aeturnus ‘Adagio’.

Somehow, these albums also sum up what Monasterium is about! The lyrics seem to be very important in your genre if you want to create a proper atmosphere. What are the stories behind them?
Indeed they are very important. For some artists they may play a secondary role but when you express yourself through songwriting you should take care of both – music and words. Our lyrics oscillate between spirituality and historic events but are also inspired by mythological themes like ‘The Shrine of the Jackal God’, describing the ancient Egyptian way to the afterlife or based on movie scripts like ‘Into The Mountain Of Power’, which alludes directly to ‘Conan The Barbarian’ from 1982. So they are not always very serious but they definitely have this classic and epic vibe.

Do you have any plans for live shows on the way?
In October we’re playing the legendary Malta Doom Metal Festival. Apart from that, there’ll be a few shows in Poland and hopefully in other European countries as well. We’ve just started searching for different opportunities and all confirmed dates will be announced on our Facebook profile.

How easy or difficult is to have a doom metal band in Poland and how is the metal scene in your country? Did you play in other bands before Monasterium?
The metal scene is pretty strong in Poland and we do have several death, black or progressive metal bands that are well known worldwide. Doom metal in general is quite common as well, that said there are numerous acts that play stoner, sludge or retro, but very few who pick the epic/heavy side of this genre. This leads us to the second part of your question. Monasterium’s vocalist, Michał Strzelecki is also a lead singer and guitarist in Evangelist – a band that laid foundations for the birth of epic doom metal in our country. And the rest of us play in a band called Sadman Institute – this is a kind of dark, melancholic prog-metal with slightly different influences. Feel free to check both these bands as well. In doom!