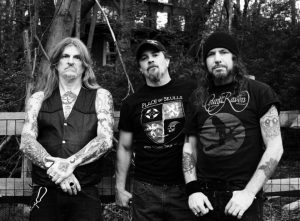 Wino reappeared on the scene a few years later with Shine who later became Spirit Caravan and released a demo as well as a couple of albums and EPs, touring Europe and the UK twice in 1999 and 2000. The band called it quits soon after and Wino pursued other projects for quite a while before reforming Spirit Caravan and rejoining Saint Vitus for another stint, which included a new album, 2012’s ‘Lillie F-65. their first since the 1995 album ‘Die Healing’. Some heavy touring culminated in Wino being arrested for drugs possession at the Norwegian border on the way to play a show in Oslo. The band and tour continued without him after he was deported back to the USA.

After briefly reuniting for some shows in 2012 and 2013, The Obsessed announced their third reunion in March 2016, which sees Wino team up once again with his longtime Spirit Caravan bassist Dave Sherman (ex-Wretched, Earthride) who has joined the latest incarnation of the band.

The band are currently in the middle of an extensive tour of the USA and are writing material for a new album.

Excited about this Spirit Caravan reincarnated as The Obsessed run of show, we nabbed five minutes with Dave who answered our quick-fire questions about how and why…

Hi Sherman, so The Obsessed is active again, how did this reunion come about, who/what instigated it?
Wino thought it was time to get The Obsessed together again because he has the right people for the job. A lot of people would say ‘Wino, when are you going to do The Obsessed again?’ and now we are.

You have been a big fan of The Obsessed for many years and have played alongside Wino already in Spirit Caravan, but how did you end up becoming a member of this line up? How does it feel to join one of your favourite bands?
It’s unbelievable, I’m so excited about being in the band. Wino and I have played with the likes of Black Sabbath, Deep Purple, etc. It’s a dream come true  but had no idea I’d play bass for The Obsessed.

Who is playing drums in the new line-up and how did he become involved?
Brian Costantino is the new drummer. He’s known Wino since 1983 and has loved The Obsessed for years. He was the roadie for Ed Gulli back in the day. He’s such a good fit for the band and knows the songs very well. He’s perfect for us.

You have an extensive USA tour coming up and have been rehearsing intensely for it, what can the fans expect from you set-wise?
We have been rehearsing religiously. It’s going to be 80 percent The Obsessed and 20 percent Spirit Caravan. We just can’t play all the songs since there’s like 100 tunes between Spirit  and Obsessed but we are going to try and play the songs people most want to hear.

Can we expect to see The Obsessed live in Europe some time this year?
We’ll hopefully be over to the UK and Europe before the end of the year.

Is there plans to write/work on new material and record a fourth album at some point?
We are writing a new album right now. We have a bunch of labels interested so later on in the year we should have a new record out. I think that it will bring the purists out of the wood work because lots of people just love The Obsessed and Wino.

Doom seems very popular these days so it’s a good time for The Obsessed to return to the scene again. What are your thoughts on the doom scene today compared to back in the mid-’90s?
It’s so crazy that nobody would be at the shows back in the day, but I guess it’s come full circle now with Pentagram, Electric Wizard and lots of other bands in the same genre of music. Doom seems to be flourishing, so I hope people can reattach themselves to The Obsessed.