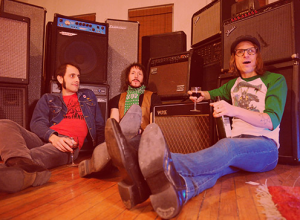 However, upon their return another addition to their already long list of line-up overhauls knocked the wind out of Kriney. So despite being seated on a stack of unreleased recordings that could fill up “something like five albums” according to him, he put the band on hiatus and chose to focus on his other two musical activities, the instrumental kraut-rock inspired Zoned Out and Grateful Dead tribute band, the Dead Tapes. Only when those two also ran into the sand – both on the same weekend – the seed of The Golden Grass was planted.

“You’re right about the fact that I did tackle many different styles over the years under various names, but at the end of the day they’re all manifestations of my inner self and tastes,” he says. “And two years ago, I just had enough. See, 2012 was a weird year for me. On one hand, La Otracina had achieved more than we ever did but on the other, the last line-up simply didn’t get along on a personal level. So at first I left to California for a couple of months, just to breathe a different kind of air and do something different with my life. Things didn’t work out the way I hoped there though, I feel I didn’t belong there. More than ever, I felt I needed an energetic shift and start something afresh, something more positive that would make me feel better. As a matter of fact, the song ‘Stuck On A Mountain’ on The Golden Grass first full-length is about that. So I came back home and started digging out old demo tapes of various rehearsals I’d had with various players over the years. And the ones with a specific guitar player called Michael Rafalowich really stood out. Not knowing the next thing I knew, we would form The Golden Grass which, ultimately turned out to be what we was looking to achieve musically with La Otracina’s latest incarnation.”

Completed by a bass player the duo found via Craigslist, the newly-formed band spent “five months rehearsing our asses off and writing”. As a result, in less than two years, they’ve recorded one demo, one 7” (‘One More Time’) and now their self-titled debut album of classic early ’70s sounding hard rock, the kind that makes you want to run amok shirtless like Mark Farner from Grand Funk Railroad. And for Kriney, the sky’s the limit: “We all want the same thing so the music’s been pouring out of us, literally. We’re already thinking about our next album and it’ll probably be a double set, with each of its LP side dedicated to one style, be it heavy rock or more folkish or psychedelic stuff. And why not bringing in from time to time extra musicians, like a female vocalist or a Hammond organ player? There’s nothing stopping us!”