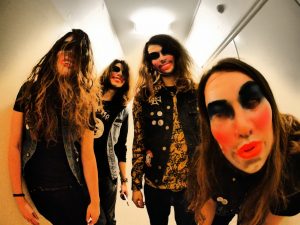 A lack of ability when it comes to musical instruments has in no way hindered the mysterious troupe’s success, however; since the release of ‘Sweeden’, Salem’s Pot have gone on to release two full-length albums on RidingEasy Records and a split with American doomsters Windhand, as well as a performance at Roadburn – something the band still look back on fondly.

“The overcrowded Green Room experience was really surreal and overwhelming,” they reminisce, however, it’s not all fun and games. “The worst thing [about touring] is probably being stuck in a van everyday with numerous people that are in completely different moods which sometimes gets very frustrating, but on the other hand we get to do something we love every night and that makes it tolerable in the end.”

A European tour with the infamous Electric Citizen in October is next on the cards for these guys but loyalty between the two founding members is what really lays at the heart of Salem’s Pot’s rapid rise to the spotlight; “There has been some line-up changes along the way but as long as the two of us are still involved the show will go on.”

Salem Pot’s ‘Pronounce This!’ (their second full-length) is out now on RidingEasy Records