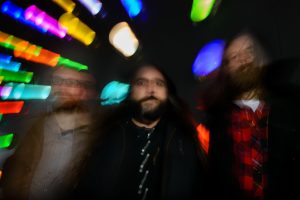 Back in Iron Fist #11 (Summer 2014) Paul Schwarz met with Bong’s Mike Vest to find out about the beast that was 11 Paranoias. Now back with their latest report from the frontiers of heavy psychedelic rock, the trio of Adam Richardson (Ramesses), Mike Vest (Bong) and Nathan Perrier (Satan’s Wrath) have once more aroused gargantuan riffs from ancient slumber, mustered intangible streams of irradiated noise, and arranged them to form an impressive, overdriven creation that shall see the light of day on October 28 via Ritual Productions.
In the run-up to the release of their fourth release ‘Reliquary For A Dreamed Of World’, and with the honour of unveiling a brand new video, we present that interview once again in full.

Originally a side-project which saw Ramesses bandmates Adam Richardson and Mark Greening team up with guitarist Mike Vest (best known for his work with the droning Bong), 11paranoias have been in flux for two years, have, to date, played five gigs and are now ready to make their grand entrance. Messaging the above and other questions from a Greek island where he was stranded by storms, Mike helped Adam catch Iron Fist up on the band, who are presently hard at work recording material for their first full-length.

Born during a period when Ramesses were inactive – Tim Bagshaw having gone to live in the US – and fuelled by Adam and Mark’s desire to play live more, 11paranoias were named for the date of their first rehearsal, 11/11/11.

“When we all got together, we just played and played,” Mike remembers. “When you’re in a band with such great and inspirational people, you don’t need to talk or analyse things too much, they just evolve.”

Booking themselves into London’s Shacklewell Studios the following March, the three got down to recording a handful of songs and a heapful of jams. “We were next door to [indie goth band] The Horrors,” remembers Adam of the two-day session, which yielded two distinctive, lengthy EPs, 2013’s ‘Superunnatural’ and 2014’s ‘Spectralbeastiaries’. Worked up from a common well of basic tracks, they chart the evolution of Mike and Adam’s vision of 11paranoias and Greening’s return to Electric Wizard in late 2012, pre-dating the two’s increasingly involved tinkering.

“It was almost random how the first four songs for ‘Super…’ and the second five songs for ‘Spectral…’ were selected,” muses Adam. “There are a lot of mind-altering overdubs – guitars, synth, samples, etc – which me and Mike added over a few months of medicated sessions. It was my first time at the controls for a whole recording and I loved it, which led into mixing and mastering for other bands recently, which is going really well. I am looking forward to mixing and mastering the new 11paranoias material soon.”

Having recruited ex-Capricorns sticksman Nathan Perrier shortly before their first gig at Supernormal Festival in 2013, Adam and Mike are excited to see what their first new recordings in two years will yield.

“His technique is flawless, his input and ideas awesome and refreshing,” says Mike of the new sticksman. “He has had to learn a lot in a short space of time, but had no problem learning our old songs.”

“He has altered his style dramatically to adapt to us and this process has worked really well for developing the new material,” adds Adam. “Some killer crossover action and fluid jams are spewing forth! We really want to get this record of our new material in the bag. There are a lot of new sounds, tones and dynamics going on with the line up now and we’ve got some great ideas for the recording and how it will be done. We are recording the next session at a different studio with different gear and there will be a different approach to the whole thing.”

What will not change for now, however, is 11paranoias’ self-sufficient approach.

“This LP will be another foray into the continuing self-production route,” Adam confirms. “We are in no way opposed to using outside talents for production but are really immersing ourselves in this insular method for now. I want to push the DIY boundaries we have already set in stone. The first two records are self produced to the Nth degree, with hand silk-screened entire pressings, including centre labels on the vinyl as well as mixing and mastering. We want to monopolise on this run of creativity on the production side of things.
Once we have finished the record we will deffo be out on tour later this year. More than five gigs, too,” he promises as a parting shot.