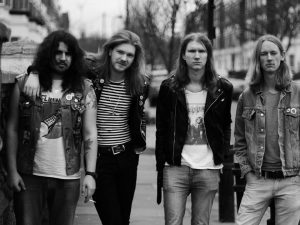 Tell us how Seven Sisters got started. How did you all come together as band?
Graeme: Me and Kyle had been talking about working on a project together for quite a while, but never really got around to doing anything about it until late 2013/early 2014. I went round his for a jam, and we ended up writing ‘The Warden’ and ‘No Guts, No Glory’ in the space of a few hours. After that, the rest of what became our demo tape came together pretty quickly and we recorded it. We weren’t intending for Seven Sisters to be a live band at the time, we just fancied releasing those songs for fun to see what people thought really. So we didn’t have a full line-up back then or anything; we recorded it all ourselves, and got our buddy Josh Winnard from Dark Forest to lay down the vocals for us. We were really surprised by how well it was received, so we ended up putting together a proper line-up so we could play live and write some more songs, Kyle took over vocal duties and the rest is history, as the say.

Where did the name come from? None of you live in Seven Sisters!
[Laughs] You wouldn’t believe how often we’ve been asked that! Basically we just saw Seven Sisters on the front of a Victoria Line train, and just thought it sounded like a cool name for a heavy metal band. After we looked into it a bit we realised it tied in with a bunch of other cool things such as the tree planting ritual in the area back in the day as well as Greek mythology and other stuff like that. Then there was the bonus of there not already being a metal band with the same name (which is a huge challenge these days), so we decided to stick with it.

You recently released your eponymous debut on High Roller Records. How did the deal with them come around?
We’d written five songs for what was going to be an EP, and Kyle had recorded rough demos of them so we could send them to labels and promoters and things like that. High Roller seemed really keen on the material, but weren’t really interested in releasing an EP, so they asked if we fancied writing a few more songs to make it into a full-length album. That isn’t the kind of offer you turn down, so the last three songs were written shortly after that and then we started recording an album. With hindsight, it was definitely a much better idea to release a full-length than an EP.

The first press of vinyl and CD sold out really quickly right? Are you surprised by how good a reception the album has had?
Very surprised! We were obviously really proud of how the album came out, and we figured the first press would sell eventually, but we really weren’t expecting it to sell out totally in about three weeks. There’s a second press due out in January, so if anybody reading this missed out first time around hopefully they can grab a copy then!

The album reminds me a lot of the first two Iron Maiden albums, in the sense that the songs are all stylistically quite different from each but conceptually similar. You have the more progressive tracks like the title track and ‘Cast To The Stars’ and the more direct headbangers like ‘Pure As Sin’, which sound very different, but like they both still belong on the same album. Was this planned, and if so how did you achieve it? Can you talk us through the songwriting process for the album?
I think it was definitely a conscious effort to have plenty of variety on the album. I think it’s really boring when an album consists of just eight or nine straight up heavy metal songs. Obviously our album is definitely a heavy metal record, but hopefully there’s a few different things going on to make it a slightly more challenging listening experience. I definitely think the songs all sound like us, as you say, but there’s a few different little things like acoustic passages, time signature changes, unusual song structures and things that hopefully make it a little bit different to your average heavy metal album. The order of the songs is really important with stuff like this, making sure the straight up heavy metal songs and the more progressive elements are spread evenly over the course of the album. The aim is that each song is a little bit different than what came before it, but you still want it to flow properly and feel like they belong on the same record.

Am I right in saying the album is a concept album? If so, what’s the story about? Something about a wizard, from what I can work out?
You’re absolutely right. It’s not a concept album in the Pink Floyd sense where all the songs flow into each other and it doesn’t make a lot of sense to listen to individual songs though. Hopefully the songs all stand up on their own, but there is a story running through the album so hopefully it’s a little bit more rewarding for the listener to play the whole thing in the correct order. In terms of the story, it’s basically a bit of a twist on the Greek myth of Orion and the seven sisters. It essentially follows our protagonist as he embarks on a quest to avenge the loss of his love – one of the seven sisters – and immortalise himself in the stars.

What do you think about this resurgence in NWOBHM. Where do Seven Sisters fit in with this “scene”, if at all?
I think it’s important to state that we’re not a NWOBHM band. That label refers to a group of bands that were active during a very brief window in the late ’70s and early ’80s, which was long before any of us were even born. Obviously these bands were an enormous influence on us, but it wouldn’t be right to say that we were a part of that same movement. That said, you’re right that there has been a huge resurgence in this country in bands such as ourselves playing more traditional-sounding heavy metal inspired by these legends of the past. At the same time, a lot of the original NWOBHM bands have either reformed or increased their levels of activity, which makes for a really interesting scene. It also means we’ve been lucky enough to share the stage with some of our heroes, which is amazing!

On a similar note, who are the bands that have inspired you, in general and with Seven Sisters?
As I mentioned before, the NWOBHM bands of the late ’70s and early ’80s were a huge influence on us – Maiden, Satan and Angel Witch just being a few names that spring to mind. We’re also heavily into other bands like Thin Lizzy and Mercyful Fate, and Kyle and myself are both huge Yngwie Malmsteen fans which probably explains the ridiculous number of guitar solos on the album.

Are there other contemporary bands that Seven Sisters fans should be listening to? I have a feeling you’ll say Portrait and Dark Forest!
Well those two are certainly no-brainers! I think most of the contemporary bands from the UK have already been well-documented by Iron Fist. But in terms of other bands that I’ve come across from touring etc, at the minute I’m really enjoying Frenzy and Leather Heart from Spain, who both play totally awesome 1980s style heavy metal, and Noctum from Sweden who have more of a Sabbath style ’70s doomy vibe. And then obviously everybody should already be listening to Helvetets Port, because they’re probably the greatest band of all time!

Finally, what are the plans for future? You guys have gone from playing to five people three years ago to now getting big audiences wherever you go. That must feel pretty good! What’s the next steps for Seven Sisters?
[Laughs] Well, hopefully those five people were still getting a good show! But no, you’re absolutely right, it does feel pretty great getting a bit of recognition and having people coming to gigs who actually know our songs and things like that. Because it definitely wasn’t like that when we were first starting out. It’s something we’ve worked incredibly hard towards achieving too, so we definitely won’t ever take that for granted. In terms of plans for the future, we’re hoping to play more shows in Europe in 2017 – maybe a few summer festivals and a small tour or something like that. It’d be cool to get back to Ireland too at some point. We’ve also started working on idea for the second Seven Sisters album. It’s very early days so I wouldn’t like to guess when that might see the light of day, but it’s sounding pretty huge already so watch this space!

Any last words?
Nothing special, just the usual end of the interview shit I guess. Thanks to yourself for taking the time to do this, and to anyone who bothered to read it too. If you haven’t checked our album out already, give it a spin if you like ’80s style Heavy Metal with tons of guitar solos. Cheers!