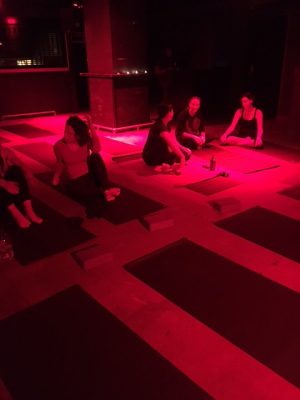 “Meditation is the practice of death” – not a million miles from doom metal then. But seriously what’s the link between doom metal and yoga? Can the two ever happily co-exist? It’s hard to imagine the likes of spindly old Bobby Liebling wrapping his legs behind his head or aligning his chakras, but hey, what do I know? I’m about to find out…

My first encounter with the concept of mixing metal music with yoga came in the heydays of Tumblr, when I saw a post floating around about combining black metal and yoga practice. My initial reaction was to scoff at the notion and had no time for what I considered to be “hippy dippy bullshit”. A few years and a mental breakdown later, I have a different perspective on these things – I regularly practice mindful meditation, to combat my natural dalliance with stress – my calmer mind is a much more open one.

So, when I was offered the chance to partake in a doom metal yoga class, I jumped at the chance, but it wasn’t without apprehension. I have all the flexibility of cheap pine furniture and my idea of a good stretch is when I reach down to paint my toenails. I had images of that scene from Peep Show running through my head (“do you want it? Do you want some more?” “No, I don’t! Fuck off! It’s too hard!”). I arrived at Miranda – a venue in the basement of the Ace Hotel in Shoreditch – to the sound of OM chanting music and a room lit mostly by candles, with a few ominous red spotlights for effect. “Will I have to take off my socks?” I panicked, and quickly had my fears confirmed by the number of barefooted yogis all sat around on the mats. Oh shit.

The classes are led by Sanna Charles and Kamellia McKayed, who are keen to alleviate my fears and reassure me that my lack of yoga experience will have no bearing on my participation within the class. “You don’t need to be anything to come – with Kamellia’s direction we hope that if people can’t touch their toes then they’ll just bend their knees”, soothes Sanna. “There’s always things you can do to get around the limitations of your ability, however, over time you’ll progress. Our friend couldn’t touch his toes when he first started coming – he can now and he’s well chuffed!” 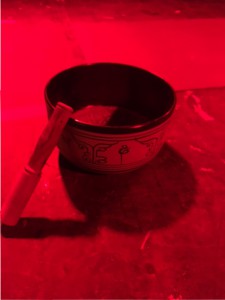 So what exactly is doom metal yoga and what can I expect from the class? “We pull it back to something which is just a little bit more static. We normally hold people in certain postures for quite a long time to really sync it with the music, and it ends up being really meditative all the way through, opposed to constantly working on the postures. It’s more like a journey,” explains Kamellia. The musical aspect of it stems from both Sanna and Kamellia’s frustration with the music played in yoga classes they had attended previously. “We’ve all had those yoga classes where it’s distracting because the music playing is stuff you don’t connect to. What we use, even though it’s of a certain genre, I feel like we’re quite clever in that we pick stuff that’s very connecting. We’re not about traditional cheesy pan-pipes. We try to make it an immersive experience.”

As the class gets underway, we move through relatively simplistic poses, such as downward facing dog, warrior and lotus and I’m surprised to find I’m actually breaking a sweat. I had always considered yoga to be a series of near impossible stretches, but never stopped to think about the health benefits. “There are profound changes within my body and my way of being that I never expected. People do it for fitness, but it’s also great for injury and feels more intuitive than going down the traditional medical route,” says Kamellia. “It’s cultivated so many other changes in my life, it feels a bit like magic really. It’s opened up a whole new way of thinking for me and I ended up radically changing everything in my life because of yoga.”

While a tracklist of Omega Massif, Tyranny and Saturnalia Temple plays in the background, the class are encouraged to scream out and along with the more guttural vocals as a means of making the postures easier and releasing tension. “I find that the music goes really well with relieving anger issues,” explains Sanna. “I believe that heavy music is a great stress reliever and just really relaxes me, as I’m sure it does for many other people.” As the session progresses, I have an almost out of body experience as I watch my legs tip back over my shoulders and touch the floor behind me – it’s difficult to believe I’ve ever struggled with shaving my legs in the shower! What musn’t be overlooked, however, is that it’s Kamellia’s gentle guidance through basic postures that has built us up to this point – combined with the music. “What we really like is funeral doom,” Kamellia says. “Some of the lyrics are so guttural and demonic sounding, but they actually sound like they’re purging their demons.”

So, how did the notion of doom metal yoga come to pass? “I had just come back from my teacher training in India and Sanna mentioned it to me – it was originally just supposed to be a group of friends just practising to doom, and I had done it a few times myself and thought ‘yeah, this works!’,” reveals Kamellia. “We originally called it ‘Doom Yin Yoga’ because the music had this quality to it that made you want to go deeper into the postures and have this more passive Yin state – the two just have this really nice balancing effect on each other. We then decided to open it up to the public, so that whoever wanted to come could come; it just began really organically.” 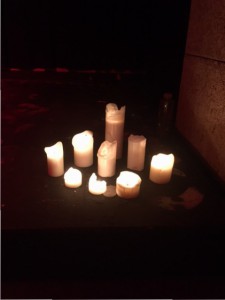 I have to admit, as we end the session meditating to Sunn O))), I am at a level of relaxation that’s usually only achieved at the bottom of a wine bottle, and I’m surprised at how quickly a 75-minute session has passed. Both Sanna and Kamellia are both eager to stress that their classes are for absolutely everyone, no matter your experience of yoga. “People who are just into the music have come along and found that they end up coming most weeks,” Kamellia tells me. “People who would never try yoga in their life have now been introduced to it and that’s great. And vice versa, people who would never ordinarily listen to this type of music come away really surprised and actually really enjoy it.”

So, would I go again? Absolutely. I walked out of the class feeling relaxed and happy and it wasn’t just because I hadn’t embarrassed myself. Doom metal and yoga make for unlikely bedfellows on the surface of things, but it turns out they’re a match made in heaven (or hell, depending on your perspective). Doom on and OM Shanti.

You can find more about the classes, which are based in London, at their website