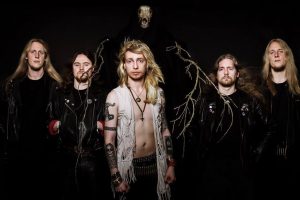 First of all, let me tell you that the improvmement from your debut EP ‚ ‘Triumphator’ (2015) is astonishing. The EP was killer and was welcomed in the underground metal scene, but your debut full-length sounds as close to the “real” thing as we’ll get in 2017. Give us a brief heads up on the making of the album, the recording and partnering up with Cruz Del Sur for the release.
Max: Thank you. The improvement you spoke about was, on one hand, the logical result of just taking our time. ‘Triumphator’ was recorded in three or four single sessions, often in a hurry, and our singer [A.Vornam] was relatively new to the band back then too. This time we took our time to record everything properly, all the small details, vocal harmonies and drum rolls. Only the guitar solos are still 90 percent improvised and almost all of them first-takes, I guess I’ll never change concerning that. I attended most of the recording sessions, to make sure the results suited my imagination.  It was very exhausting, but worth it in the end, I suppose.
I spoke with several studios, but in the end I decided to work with S. of Sulphur Aeon, and he convinced me immediately. Mario [Weiss] of Atlantean Kodex advised me to contact him and that was indeed a lucky coincidence. We got along fine personally too, which is important, as I’m not always the easiest to work with. But S. has got a really calm aura and he did an awesome job.
Cruz Del Sur had always been my wished-for label. I always liked the dedication that Enrico puts into this label and his releases, besides I love almost all bands of their roster. We were in a loose contact after the reviews of ‘Triumphator’, and he said, that he’d like to wait for a full-length album first. We then met at last year’s Harder Than Steel Festival and had a longer chat about music, obscure heavy metal and the Italian scene. Some weeks later he wrote me and asked, if we wanted to join Cruz Del Sur and I didn’t have to think about that for long. I’m proud to be part of this label.

On ‘Far From Light’ everything looks in order; the new logo, the cover art, the musical maturity, lyrics and the variety of the songs. What are the inspirations and incentives that helped you get the final result?
First of all, personal experiences that I have been through in the past two years. Loss, struggle, downfall. ‘Far From Light’ is an album about death and my fascination of this topic has always followed me throughout the days. I’m also an obsessive reader and book collector, some of my literary idols have influenced several songs, for instance Tolkien, Robert E. Howard or Alfred Lord Tennyson. This all forged together portraits of how I felt when I wrote these songs. Bare of hope or perspective. Far From Light.

How would you describe your music to someone that doesn’t know Lunar Shadow?
We play epic and melancholic heavy metal with tons of twin guitar leads. A strange amalgam of Dissection, Wishbone Ash, old In Flames and Judas Priest. Lunar Shadow, ruining every party since 2015.

What are the new bands you really like and how do you see the current underground metal scene?
There aren’t that many new bands that manage to really thrill me. Atlantean Kodex are one of them, I’ve been a die-hard fan since the very beginning. Dark Forest, our brothers from Albion. I adore Borrowed Time (RIP), ‘Of Nymph And Nihil’ is probably the best song of the 21st century. Gatekeeper too and Stone Dagger had an awesome EP. Diabolic Night, playing wild and blackened speed metal. Attic are among the best bands of my homeland. The new Eternal Champion album really blew me away, good stuff. Forteresse from Canada are among my favourites too, just like Sun Worship, Terminus or Wytch Hazel (great Wishbone-vibes!) and the Australian Road Warrior, which need to be mentioned too. Ah, and Vulture’s Venegeance from Italy, the best EP last year.
About the underground scene, there are pros and cons, as always. There are some good new festivals growing in the US and England. Several bands go their own way and release awesome records, as listed above. Yet when it comes to heavy metal I’m not that fond of the recent scene. Too much repetition, too many “Post-Everything” bands, which mainly consist of an image created by clever managements. Most classic bands either try to sound like Skull Fist, which is terrible, or right now this Razor-like speed metal is en vogue. Mostly not my cup of tea either. Trends come and go every few years. I don’t go out too much, so I basically consider myself only with a certain reserved part of the scene. But I’ve got my friends there and I enjoy visiting selected shows and festivals and I wouldn’t know what to do without heavy metal anyway.

I don’t want to ask you what you expect from the new album, but do you think nowadays a new band will ever reach the heights of popularity the ’80s and ’90s metal bands did?
No, I don’t think that’s possible anymore. And when I see, which “newer” metal acts are considered huge these days, that’s probably for the better. Sabaton headlining, while Accept play as their support band, what the fuck? Things were different back then. Heavy metal was new and dangerous in the ’80s. There weren’t that many different genres and people listened to Venom, Judas Priest, Slayer and Krokus all together. The whole infrastructure has changed. Nowadays you’ve got extra festivals for extreme metal, some for classical heavy metal, some for wannabe Vikings, some for avant-garde hipsters. Everything has become blurry.

So, how do you see the future of metal music when all the legends, brand names and arena bands will retire or leave the mortal world?
I don’t see any band, that could follow the footsteps of Maiden, Priest or Sabbath. Let’s have a look, which younger bands are headlining the bigger festivals now: Sabaton? No. Volbeat? No. I think the big arena shows will slowly disappear, the future are these bundle-shows, where two or three bands play together to get people to the concerts. Small club concerts will always be, which is a good thing, because I prefer them. Heavy Metal will probably never be mainstream again. This world is becoming shallow and empty, more and more and more, every day. And so are the people, and so is their music. Turn on the radio. We’re doomed.

Who got you into heavy metal; Sabbath, Priest or Maiden?
Judas Priest. I bought ‘Painkiller’ when I was 10 or 11, and it was over. Goosebumps. Glenn Tipton is my huge idol on the guitar, Rob Halford my favourite singer. I got their covers tattooed on my arm. This band means everything to me, I listen to them every day.
Regarding Black Sabbath, I prefer the Tony Martin-era, after that Dio. And Maiden, well. Controversy alert on, I like Maiden, they have songs that are really dear to me, but I rarely feel the immediate urge to listen to them.
You don’t seem very active with live shows. Will that change now with the new album?
We won’t play that much in the future either. The arrangements are not a problem at all. It’s just that I don’t want to play that many concerts and my bandmates don’t seem to have a problem with it either. I only want to play shows that interest me, with other bands that I like. That’s limiting, it does also limit our “outreach” in the scene, but that’s the way we do it. But do not hesitate to send us your offers. I read everything.

When 2017 will come to its end, how would you like to remember it?
I’d like to see some recognition for ‘Far From Light’, that it has become dear to some people and that I can look back on many discussions, concerts and good memories with people I like.