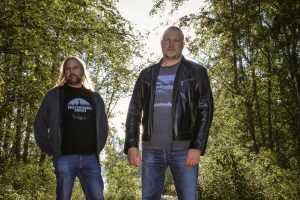 Before Quicksand Dream, there was Epic Irae. Give us a brief recap of your early years in music, the creation of Epic Irae and the transformation to Quicksand Dream.
Epic Irae was the original name of the band, formed by a bunch of schoolmates in the autumn of 1988 inspired by the likes of Candlemass, Manilla Road, Cloven Hoof, Stormwitch and Celtic Frost to name a few. We had very little previous experience and learned along the way by trying out different styles, preferably all at the same time. Focusing on writing and rehearsing we managed to record three album-length demos, all eventually featured on the double anthology CD ‘Dreams And Delusions 1989-1993’ released by Evil Confrontation Records in 2012. We also played a handful of local gigs, but I don’t think we ever made much of an impression on the local scene. Still in 1992 we were asked by a local record label to participate on a sampler CD with metal bands from the area. Around that time we decided to make a name change and ended up with Quicksand Dream. The sampler, ‘Metal North’, was released in the spring of 1993 by which time the band had already folded due to lacking interest to keep things together. A few years later Göran was approached to sing on some conceptual material I had recorded, called ‘Aelin – A Story About Destiny’. A couple of these songs were actually rehearsed during the Epic Irae days. The ‘Aelin’ project was finished around 2000 and limited edition of CD-Rs were put out for mostly archival reasons. Then, we decided to keep the name Quicksand Dream.

So, it took you a while to have an official release out, and your first album ‘Aelin – A Story About Destiny’ is not a “regular” debut album, as it was out as a CD-R in only 30 copies in 2000, until 2010 when it was finally released on CD (via Planet Metal) and vinyl (High Roller). Leaving aside the lyrical content, what’s the story behind this release and how did it come out like this?
After we called it quits back in 1993 I really wanted to continue to write and record music. Over time I collected more and more low budget equipment to keep it going and over the years more ideas went onto tape. As mentioned, we had already tried a couple of songs in Epic Irae but I really wanted to tie it all together and decided to make a conceptual album. Göran was called in to create all vocal harmonies to the music and lyrics I had written. Since nothing happened after the demo release we decided to put it out on MySpace, I’m guessing around 2008. It caught some attention, labels were approached and finally it got its proper release in 2010.

What are your inspirations and what things influence your lyrics? Both the music and lyrics of Quicksand Dream seems to have a deep and personal or metaphorical touch.
Inspiration comes from the music I grew up with and that I still love today. The lyrical content is quite different between the two albums, one being a magical made-up epic adventure and our new album contains a deeper and personal look on the many problems and struggles we see today (and throughout history too). I really think Göran has been able to touch important subjects yet staying within the epic metal realm.

Your second album ‘Beheading Tyrants’ was released few months ago by Cruz Del Sur. This is a step further from your debut. It is epic, doom and a blend of all things unique and passionate. It might remain forever an underground classic, but what would you want to succeed as a musician and artist and what’s the feedback you’ve got so far from the album?
We are getting too old to have dreams, but of course, when you put out an album it is impossible to not hope for a nice response from old and new fans. The album was mentioned several times in a couple of album of the year lists. And if there are a few people that think it is one of the best releases then we have really succeeded as artists. So, where are the long tours and many live dates one might ask? Well, it’s not as simple as you put out a good album and the road just opens for you.

Do you have any plans about live shows?
It would be really great to be able to perform. As it seems nowm it will not happen, but it would probably come as a nice surprise, for some at least, if we suddenly announce the opposite.

Since there was an eternity between the two releases of Quicksand Dream, how was the composing and recording procedure of ‘Beheading Tyrants’?
Between 2010 and 2015 I put out four albums and have done several shows with my other band Mortalicum, so the focus has been on that. But, over time the idea to try out something for Quicksand Dream grew stronger. I had a couple of short ideas from the ‘Aelin’ days, which were in fact the intro to ‘Daughters Of Eve’ and the intro (and mid-break) to ‘White Flames On Black Water’. So, except for these two little ideas I started from scratch. I had no idea what to write, so I basically started with the opening intro and decided to record the first thing that came to mind after that. And so it continued. One riff leading to the next, without plan, without restricting myself to the old verse-chorus-break-whatever system. So, once I started it really did not take long at all to create the whole album. It was not done on one occasion though. I recorded when I had time and was inspired. But all in all there were not many hours spent on the actual creating, more so on the waiting between. It was really a very creative way to write an album. Many parts of the music were played only once, so if I, for example, have to prepare to play it live I need to check what the hell I actually played [laughs].

Both you and Göran are active metal fans, how do you see the metal scene today?
In some sense it is pleasure overload. There are many opportunities for bands to play and yet again too many bands competing to get a slot. The great thing is that you still are able to discover a new band that you really take to your heart.

What’s the best and worst things or situations you’ve seen and witness in music and also life?
In music the best things are creating, playing live, and playing abroad. Don’t know of any bad things really, but maybe realising how hard it is to actually get through to a bigger audience. On a personal level, there are always times of great happiness and great sadness. It’s all a part of life.

Will we wait more than a decade for your third album?
Well, you know we do not want to rush things [laughs], so I guess we’ll have to see. Thank you very much for the support and opportunity to ramble. It was my pleasure and honour.