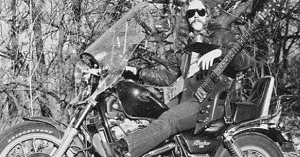 “I always thought that my music could be related to by others but I was never sure if it would amount to anything. I always had the dream and I guess I’m proof that sometimes dreams do come true.
But it appears this only happens when you really work hard at it and don’t give up.”
– Mark Shelton, Metal Brothers webzine, 2017

Mark Shelton was entranced and consumed by music from the earliest age. His mother was Professor of Music at Friends University in the Sheltons’ hometown Wichita, Kansas, and she ensured that the fledgling Shark was learning piano from the age of four. At school Mark played trumpet and baritone and sang in choirs before playing drums in jazz band The Herd, but he finally picked up an electric guitar after bearing eyewitness to the birth of heavy metal. Mark was still 13 years old when he saw Black Sabbath live in Wichita in 1971; “I stood right in front of Tony Iommi all night going ‘Yeah, that’s what I want to do’,” he told Mark Kadzielawa in 2017. However, in his first rock band – appropriately named Embryo – Mark was drumming and singing on covers of songs by abiding inspirations like Deep Purple, Pink Floyd, Jimi Hendrix, The Who, Alice Cooper, Grand Funk, Yes and Johnny Winter. Mark’s first stint as guitarist was in a band promisingly entitled Apocalypse, but around this time he also joined a couple of “country rock” groups “just to make money” he later admitted – surely the only time he ever applied financial motives to making music.

After a stint in the Marine Corps, Mark had a load of aggression to work out: “When I got back I was all ready to rip people’s heads off and shit down their throats,” he explained to Snakepit zine in 2000. “That’s what I was trying to achieve with my music at that point.” The result was Manilla Road, perhaps the one band that best separates metal’s true brethren from the dilettante part-timers. A demo tape, ‘Underground’, was recorded in 1979 (and subsequently lost), but with such raw, arcane sound, label support was unforthcoming. Undaunted, Mark set up his own label, Roadster Records, to produce and distribute the trio’s debut LP ‘Invasion’ – a rough-and-ready curio absorbing influences like Rush, Hawkwind and the emerging NWOBHM with an eccentric, late-night stoner basement vibe. After recording and scrapping an entire follow-up, ‘Dreams Of Eschaton’, MR unleashed the self-explanatory ‘Metal’ in 1982, a slightly more accessible LP that fully embraced Mark’s passion for epic fantasy in infectious tunes like the Conan-indebted ‘Queen Of The Black Coast’ and the mystical ‘Cage Of Mirrors’.

Although Mark was later critical of the homemade naivety of those early records, they bear testament to the development of a highly singular talent, a man whose lead playing spontaneously assimilated the quirks of Seventies rock’s finest axemen and fired them through his own wholly unorthodox and distinctive vision. Mark’s voice already set the band fully apart, although he often conceded that his valorous nasal proclamations (once likened to Skeletor fronting a metal band) was an approach that people either loved or hated (but really, how could you not love it?). His songwriting nous was also embryonically evident, taking a dead simple, in-your-face riff and somehow imbuing it with celestial magnitude. All these were to radiantly crystallise on 1983’s ‘Crystal Logic’, a cast-iron classic of doomy Weird Tales metal that was just the first in a cryptic triptych of cast-iron classics, with 1985’s ‘Open The Gates’ and 1986’s ‘The Deluge’ both benefitting from richly-improved production, the auspices of a ‘proper’ label (French imprint Black Dragon, who signed Candlemass on the strength of Mark’s enthusiasm) and a new trump card behind the drum kit: Randy ‘Thrasher’ Foxe, pushing the propulsive momentum to thrilling new levels.

With an impulse to get faster and heavier with each release, 1987’s ’Mystification’ and 1988’s ’Out Of The Abyss’ edged closer to the barbaric fury of thrash, with Mark’s love of horror to the fore – where it stayed for 1990’s ‘The Courts Of Chaos’. However, as the Nineties began, traditional heavy metal was in a state of embattled confusion. “Metal is dead so I’ve heard, but not while I’m still above ground,” Mark sang on the hypnotic ’Dig Me No Grave’, but in truth the band he’d fronted for 13 years was on the brink of collapse. He assembled the all-new project Circus Maximus, recording a versatile, experimental LP in 1992, yet Black Dragon insisted on releasing it as Manilla Road, a weasel tactic that hastened Mark’s withdrawal from the music business. In retrospect, it was a savvy move to sit out the Nineties altogether; while metal was diluted into increasingly undignified, bastardised forms, the true cult epic legend of Manilla Road continued to grow, new generations cottoning on to the secret majesty of those deep-underground masterworks.

Manilla Road finally re-emerged in 2001 with a concept album that redefined the concept of epic; ‘Atlantis Rising’ told of a war between Cthulhu, Odin, Poseidon and Thor, stuffed with sea beasts and elder gods (“I don’t know how I came up with it, except that I smoke a lot of marijuana,” Mark quipped). It set the tone for a Manilla Road comeback that Mark undertook with total conviction and commitment, gigging relentlessly while releasing seven more studio albums in fifteen years securing the band some long-overdue recognition and devotion. “For many years I had to work a normal job as well as work at keeping a music career alive,” Mark explained to Spanish webzine Metal Brothers, accounting for his prolific creativity. “That and also raising two children left me very little time to spend working on writing and recording music. Nowadays my children are fully grown and I am making a meager living on my music alone. I don’t have as much money as I did, but I am much happier.”

In the last few years Mark was expanding his horizons via the mischievous nom de plume EC Hellwell, forming an eponymous band to explore his love of Seventies prog, also using the name to pen weird tales for the metal musicians’ literary anthology Swords Of Steel. Additionally, Mark recorded an acoustic solo album ‘Obsidian Dreams’ in 2015, and reunited with original MR drummer Rick Fisher to form Riddlemaster, releasing a stellar LP in 2017. Last month Mark featured as guest vocalist on the new album by Greek power metallers Battleroar, as Manilla Road worked their way around the European festival circuit. It was in the midst of this busy activity that Mark was suddenly and unexpectedly taken from us after a headline show at German festival Headbangers Open Air. He leaves behind three children and a granddaughter, as well as an immensely passionate and loyal worldwide fanbase. Just last month Iron Fist spoke to Mark for a forthcoming feature on American metal. He was the most easy, sincere and humble interviewee, and we’re enormously glad that we took the chance to thank him for one of the all-time greatest discographies in metal. We asked if there was a feeling around ‘Crystal Logic’ that Manilla Road had something truly magical going on: “Oh hell yes!” he replied. “There was and still is that overpowering feeling of magical influence going on. I still feel it today, stronger than ever. Onward and upward into the never ending spiral of magic we call music.”