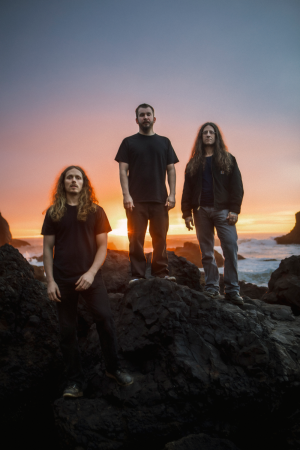 It’s been a tough year for Yob guitarist/vocalist Mike Scheidt, to say the least. After enjoying widespread acclaim and some of their biggest and most successful tours yet in the wake of 2014’s ‘Clearing The Path To Ascend’, a record already considered classic in certain quarters, disaster struck in November 2016 when Mike was diagnosed with acute diverticulitis, a permanent and potentially fatal intestinal disease, and was rushed into emergency surgery in January 2017 following a major flare up.
“The future of the band was uncertain,” Mike recalls. “If I had ended up with a permanent colostomy, touring would have been done. I hadn’t sung in five months, and in the healing from my abdominal surgeries, we didn’t know how my voice would fair. Plus I had to survive both surgeries, and a MRSA infection I acquired in the hospital which had attached to a shingles outbreak due to my immune system being compromised. Life was more groundless than it had ever been.”After nine gruelling days in hospital, Mike was discharged and, thankfully, made a fairly miraculous recovery, but coming this close to the brink of death is an experience that has shifted his perspective in many ways.

“Some are small shifts and some are huge ones. One big shift is time is not a given. I know for certain this form will pass as all forms do, and I want to make the most of the time I have left – cliché and obvious maybe, but all the same very real to me. While working on the album, we felt lucky to be recording new music, with an increased sense of joy in doing it. We’ve always had that feeling to some degree, but this time had more current, and a different flavour to it. Words aren’t adequate.”
A testament to both music’s great healing power and Mike’s sheer determination, Yob wasted no time in resuming work on their seventh album, ‘Our Raw Heart’, even before the frontman was fully back on his feet.

“We had small pieces of new music written, and one full song before I became ill. Everything I had musically came into clear focus post my first surgery, and the rest of the album unfolded in short order. While working on it, each day I had a mindset that wherever I was in the process, there were no guarantees I was going to survive long enough to finish the album, record etc. So each writing session had to be an arrival in itself, playing guitar seated, often by myself, feeling both lucky and grateful in each moment for the fact of just playing, no certain future. That situation has never not been the truth, really, but at the time the truth of that reality was acute.”

This willingness to live in the moment has had a powerful impact on ‘Our Raw Heart’, manifesting itself not only in pensive, starkly beautiful moments like ‘Beauty In Falling Leaves’ and the title track, but also some of the band’s most triumphant, direct and visceral material to date, like ‘Original Face’ and the burly, impossibly heavy chug of ‘The Screen’. Taken as a whole, the result is a powerful, life-affirming opus that’s arguably even more diverse, well-realised and emotionally affecting than its lauded predecessor.
“The album more or less shaped itself,” Mike says with trademark humility. “I would say my hope towards the new album is that it emits a sense of exploration and freedom that has its roots in some new perspective, and miracles, really. The support and love that was shared with me when I fell ill is nothing short of astonishing. I hope this album’s music emotes the gratitude I feel for the gift I received, it couldn’t have happened otherwise. Aaron [Rieseberg, bass], Travis [Foster, drums] and I had a great time working on these songs together, and we pushed each other to try new things.”

Mike has returned his role as frontman with renewed vigour and passion for his craft, explaining how he’s been hunkering down on his music theory and trying to expand his vocal range.

“I’ve been taking voice lessons from Wolf Carr – who’s currently located in Seattle and offers Skype lessons as well as in person lessons – off and on since 2012, and I can’t recommend him highly enough. As I was building my voice back up, I found myself exploring new resonant places within my head and chest because I couldn’t bear down too much on my diaphragm out of fear of risking a hernia at the incision sites. As I became stronger, those new resonant places merged with my previous style and have become something new for me. As for studying music theory, for the most part I’ve been adding some new scales and chord progressions as well as studying bouzouki. I’ve been learning scales that fit GDAD tuning so I can morph in the moment and change keys and flavours as it strikes me. It’s been a blast.”
Whilst Mike was always something of a powerhouse vocalist, you can really hear the benefits of the extra work he’s put in, with his voice soaring to ever more expressive peaks on songs like ‘In Reverie’ and the aforementioned ‘Beauty In Falling Leaves’, a song that seems to have been born from a similar place to ‘Clearing The Path To Ascend’s much beloved final track, ‘Marrow’, with the original idea germinating from Mike’s acoustic solo work.
“I’d say ‘Beauty…’, ‘Our Raw Heart’, and even songs like ‘The Great Cessation’ are informed by acoustic work. I tend to avoid talking about what certain songs mean to me, in print,” he continues. “If I talk about them, my take in that moment may get frozen in time for the person reading the interview. Talking about what songs ‘mean’ for me is like dissecting a frog. We can get to its guts and understand it better (maybe), but the creature doesn’t survive. I want a listener to have their own original experience with a tune, therefore I don’t want to colour it with rhetoric. One on one talking with someone about a particular song is different, and in that case sometimes I get to hear how the music strikes them independent of my story around it. That I love.
“I know what they mean to me, and in a way my lyrics are looking into a mirror, revealing both my strengths and my blind spots,” he continues. “What they mean to me changes over time. They’re very personal, but I don’t need to ‘own’ their ‘meaning’. Another’s take on what they mean to them is best served without my commentary. I will say I have changed in some significant ways in the last year, and I have a different outlook on how I want to spend the rest of my time and attention in this form. It’s a largely joyous feeling. My depression is still there, sometimes louder than other times, but I see it from a different place than before.”

It’s interesting that Mike brings up ‘The Great Cessation’; originally released back in 2009 on Profound Lore, the album was reissued via Relapse on CD and vinyl last year, leading to Yob officially signing a deal with the label for ‘Our Raw Heart’. The impact this classic record has had since its arrival almost a decade ago has only escalated with time, and with the band recently casting their minds back to the past with this reissue, it’s tempting to wax lyrical about the album’s influence on their future too, though Mike isn’t so sure.
“It’s hard for me to be objective about previous albums,” he admits. “When I listen to them (which is not often), I’m reminded each album was the best we had in us at the time. We’ve kept those songs from ‘The Great Cessation’ in rotation, and they’ve grown with us as we have grown as a band. The music from ‘The Great Cessation’ still feels very good to play live. That album was our first album after having taken a three [or] four year break from being a band, it was our first album with Aaron Rieseberg, and it came when doors were opening for bands like ours. It was a very exciting time. We like change, and change our surroundings often, change labels, etc. We also roll with what’s happening and feels right. That is how this reissue and new art came to be.”

Mike seems very pleased with this particular change too, brimming with enthusiasm for his new label home.
“I’ve been listening to Relapse albums since, I don’t know, ’91? The Suffocation ‘Human Waste’ EP, Disrupt, Macabre, Morgion, Human Remains, Neurosis, High On Fire, Nile, Today Is The Day, Benümb, and many more have been of influence and enjoyment. I don’t know how many Relapse albums I own, but it’s not a modest number. Relapse has been great to us, and we’re excited for the future.”

And it’s a future that’s looking much brighter now than it did this time last year, with Relapse’s backing, one of their finest records to date and (most importantly) Mike’s improving health being huge causes for celebration in the Yob camp. The trio are looking forward to getting back on the road too, with Mike recalling the rush of emotion he felt when stepping out on stage after successfully overcoming his surgery.

“Words fail,” he beams. “It was a true joy, and also a bit scary as we didn’t know how my body would do. The first show we played, which was at Northwest Terror Fest, we played a solid set. I then hit the wall hard and had to sit in the van and lay down, honestly worried I’d just hurt myself and not sure how badly. Luckily I was ok and just needed rest, but I’ve found my body has some new limits. Over time I’ve gotten much stronger, but limits are still there. However, I get to work, so I’m very grateful. We’ll do a US tour and a European tour this year, along with some scattered dates here and there. Next year we’ll likely do the same, and also branch out to hit some places we have yet to play. The future is writing itself as we go, and we’re glad for it.”

‘Our Raw Heart is out now on Relapse
www.YobIsLove.Bandcamp.com