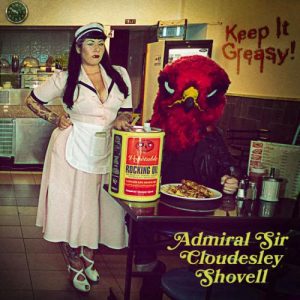 Psychedelic is a word bandied about in so many press releases and reviews of late. It’s the go-to descriptor for any music that even hints at a pre-1983 inspiration. Admiral Sir Cloudesley Shovell are not psychedelic. They have no truck with your middle class drugs. They are a strictly pint of ale and packet of scratchings band. The Hastings band even sound like the name of a pub, well that and main influencers Sir Lord Baltimore (which could also be the name of the boozer across the way).

‘Keep It Greasy!’ is the third album from the booze ‘n’ blues rockers who started in 2008 and while they look like the once stars of Top Of The Pops 2 (the ones who went on to be under police scrutiny), there is a touch of modern doom and heavy metal creeping in amongst the Juicy Lucy, Mountain and Budgie tributes.

There’s the touches of humour we’ve come to expect from this mob of shearling jacketted louts and even a sprinkling of romance in ‘U Got Wot I Need’. On ‘Hairy Brain Part II’, singer Johnny Gorilla proves he is a modern Hendrix in the making (in the vocal department that is, and we’re sure he’ll not mind us making that point firmly) although he does kick out the jams on the harmonica-laden ‘Potato Boy’. At six minutes ‘Paid In Full’ is too long for the working man’s club circuit but ‘Hawkline Monkster’ is monstrous, even tipping its hat to ‘Phantom Of The Opera’ (Iron Maiden not Michael Crawford).

Towards the end of the album ‘Tired & Wired’ and ‘Wrong’ sound modern, as if on any ’90s desert rock or even Helmet album, but it does not jar with Shovell’s MO. They never promised to be a throwback band or vintage vinyl snobs, they just want to rock out and still make it for last orders and on that point they deliver.