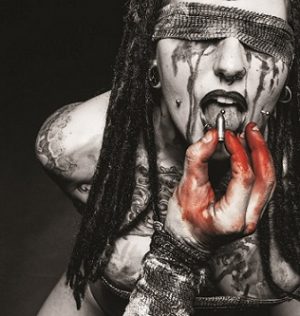 What started in 1999 for Ferdinando “Herr Morbid” Marchisio as a solo project has flourished over 15 years to become an influential act within suicidal black metal, an expanded musical palette evolving over seven albums whilst nurturing a pervasive atmosphere of negativity. Forgotten Tomb’s eighth, ‘Hurt Yourself And The Ones You Love’ continues the trend, the industrial-edged ferocity of ‘Soulless Upheaval’ starting feral proceedings before paring down to a medium-paced groove, which serves to heighten the impact of a solo so soulful it proves to be the album’s highlight. In danger of having peaked too soon, ‘King Of The Undesirables’ then adheres to a more conventional song structure, Herr Morbid’s rasping refrain of “I am the king of nothing”[$itals lyrics] displaying an obvious pride in his legacy as a pied piper leading listeners into negative oblivion, but that palpably vehement nihilism that made their earlier material so believably nightmarish is lost within accessible grooves and a squeaky clean production that detracts from the intentionally torturous atmospherics; the equivalent of watching a horror movie, rather than having to endure such horrors yourself.