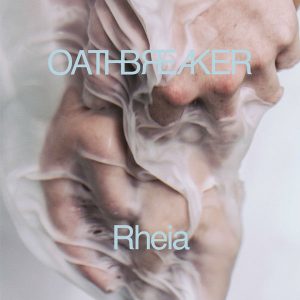 Last week saw a presidential candidate casually rebutting anger over his sexual provocation as “locker room talk” and renowned human rights lawyer Amal Clooney was reported to have “had a tantrum” in court. It is becoming ever clearer that women are still made to feel invisible and disenfranchised when it comes to expressing their rage. This is where albums like ‘Rheia’ become vital.

On this ten-track album, Belgian quartet Oathbreaker, fronted by Caro Tanghe, run the gamut from tortured explosions to hidden pain. Being released on Deathwish comes as no surprise, it is the label run by Jacob Bannon, who showed how torment can be expressed musically so perfectly on Converge’s ‘Petitioning The Empty Sky’ twenty years ago. On ‘Rheia’, Tanghe is not having a tantrum, she’s not “having a bad day” and while moments of ‘Rheia’ are haunting, or even spectral, there is nothing otherworldly about it. She is royally fucked off and she has every right to be. Helen Reddy sang “I am woman, hear me roar” in 1975, but in 2016 Caro owns that roar.

Belgium has a rich history of marrying caustic punk with spiteful heavy metal – and always with fierce women behind the mic, or behind the scenes – but Ghent’s Oathbreaker are taking those metalcore roots and planting them where they will be forced to flourish. The torment that pours out of Rheia will not be silenced and where frostbitten black metal riffing meets the maddening, echoing blues of the voiceless and where the violence of combustive hardcore and Neurosian post-rock catharsis collide, Oathbreaker create anthems that show how the 51% are not stroppy or petulant, they’re frustrated and hurt and fucking livid about it.