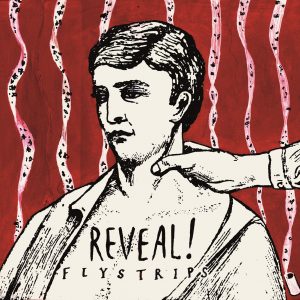 The wolves of Uppsala have not howled of late; a few years ago there was an unrequited frenzy where anything this secretive sect of friends produced was hailed as cult metal gold. It all but seemed that they batted off the unwanted attention and scuttled back to their batcaves and bar a 7” earlier this year it’s been five unbelievable years since one such UMOD army, revealed their debut ‘Nocturne Of Eyes And Teeth’. While bands like Watain, Degial, In Solitude (RIP), No Future and Reveal seem to share limbs at any one time, the latter have emerged from the sepulchre with new album ‘Flystrips’. A lot can happen in five years, especially when you’re young, nihilistic and, as proved on so many of these Uppsala projects, ravenous for any and all music that touches the dark and the crazed, and it seems that where once brilliantly executed but safe, familiar creepy death metal once passed muster, it’s not enough for these inquiring minds. Sounding like they fell in with the wrong crowd, ‘Flystrips’ is virile, arrogant and vindictive. They’ve been cramming GG Allin, and The Germs, The Birthday Party and The Cramps and then distorted that knowledge to fit with what they already know; the viscousness of Master’s Hammer, Antaeus and Necrovore. You should always expect the unexpected when it comes to this group of musicians, but it looks like Reveal just revealed their true colours.