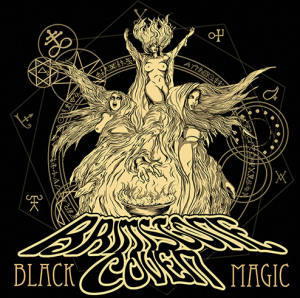 West Virginian dark occult rockers Brimstone Coven have announced they will release their first full-length album, ‘Black Magic’, via Metal Blade Records in January, 2016. Recorded at Andrew D’Cagna’s Sacred Sound Studios in Ohio, the album was mostly written over a year period against a backdrop of “candles, incense, solitude, and a thick air of ganja”. The band are said to have taking influence from Sabbath, Pentagram, Zeppelin but also Pink Floyd, The Mamas & Papas, Yes and The Byrds.

The band reveals, “What sets ‘Black Magic’ apart is the genuinely eerie aura it invokes. We strove for a sound that makes you feel like you’re wandering through a shroud of mist, unable to see your own hand in front of your face. We want you to feel equally excited and creeped out, letting your imagination run wild and get the best of you.”