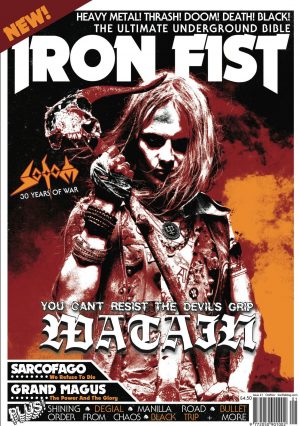 WELCOME to the first issue of Iron Fist. I can’t believe I’m writing the editorial to this magazine. It’s been an exciting but stressful few months from conception to birth. The magazine was born, like all good things, after some serious drinking and instead of waking up laughing off the insane ideas that were discussed over good wine, good friends and good music, I was encouraged to make a go of it, and here is the first in hopefully many issues of a magazine solely dedicated to heavy fuckin’ metal and its bastard offspring.

The first time I realised this was needed was when watching King Diamond at Hellfest. I was utterly inspired by a man, who despite everything he’d been through, put on a real, old-fashioned triumph of a rock ‘n’ roll concert. He didn’t just play a show, he put on a show. If I could distil just one tenth of that passion, excitement and invention into Iron Fist then I would have succeeded. After much soul-searching (and running away to a beach in Devon!) I decided to get my arse into gear.

I couldn’t have done it without the support of the Iron Fist crew, for whom I now … Read More