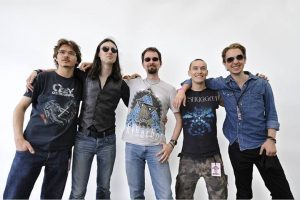 The first time Iron Fist laid eyes on Hekz, back in 2005, they were playing a sports centre in the arse-end of Middle England, and despite being school age were churning out Maiden-friendly riffs with a progressive edge a la Fate’s Warning that completely belied their youth. Four EPs later and we’ve been keeping an eye on this Bedford mob. Recently released debut full-length ‘Tabula Rasa’ proves how far they’ve come.
“The current line-up is very different from when we started,” Matt explains of how they’ve grown since inception. “Kirk [drums] and Al [guitars] came on board in late 2008, Tom [guitars] joined us in May last year and was plunged headfirst into the pre-production for our album. Career highlights thus far have got to be playing Bloodstock Open Air.”
Playing traditional heavy metal at such a young age must have had something to do with great parenting, is that true, Matt?
“My dad’s got a lot of obscure, eclectic stuff like the Groundhogs and Black Widow, which caught my interest, as well as stuff like Uriah Heep and The Edgar Winter Group. I remember him doing me a copy of Black Sabbath’s ‘Paranoid’ by burning the audio from his vinyl onto a CD, it played as one continuous track but I thought it was great!”
Matt, we salute you and your Father!