GRAND MAGUS INTERVIEW: “THERE WILL BE A PRICE TO PAY FOR HUMANITY’S ARROGANCE” 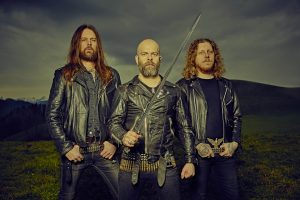 Earlier this year the steely Swedes in Grand Magus unleashed a sixth dose of heavy metal fury on new label Nuclear Blast. ‘The Hunt’ was a triumphant antidote to the musical ennui dominating the release schedules and put them out there as firm contenders on many an end-of-year list, including ours. A dash of old Europe, Saxon, Bathory, even WASP, ‘The Hunt’ became the soundtrack to the fertilisation of Iron Fist, its lyrics of courage, self-preservation and determination giving us the drive to get this magazine off the ground, so it made sense to check in with the Grand Magus himself, JB Christofferson, to thank him.

“Most of our albums and songs and lyrics are about power in some sense; trying or searching for the power within to make yourself stronger and overcome strife and struggle,” he told us, on his way back from his own personal daily grind, travelling home from work on a commuter ferry across his hometown of Stockholm. “That’s also something that I want to project with our music, that I want the listener to feel the power themselves when they hear our songs.”

While Grand Magus’ music no doubt inspired our path, it’s interesting to discover that the band themselves didn’t breeze through the process of making a new album either.

“’The Hunt’ was definitely a struggle to do,” JB admits. “We have a new drummer, we have a new record deal and everything happened so fast and there was a lot of pressure on us. You just have to find the strength not to give up. Making an album for us has always been like going to war. You don’t know what’s going to happen or if you’re going to survive. I just had to do it, you know, even though some days I felt, ‘Fuck it, I don’t wanna do this any more’. I said to myself ‘Okay, if you don’t feel like doing this any more then what’s next?’ This in the most important thing in my life and I just have to do it, even though it’s not always enjoyable all the time, at all.
“’The Hunt’ is a reminder that mankind’s power over animals and nature is hollow and imaginary,” he continues on the themes of the new album. “There will be a price to pay for humanity’s arrogance and when we are naked and stripped of our armour of science and inventions, we are prey. The most awesome hunters and the most perfect beings are not human. The song and the album as a whole also deals with the Scandinavian belief that there is a connection between wolf and man that is rather special, something that I happen to have first hand experience of.”

‘The Hunt’ couldn’t have come at a more perfect time, not just for the encouragement it gave us, but it was released in May 2012, right in the middle of the cultural phenomenon known as HBO series ‘Game Of Thrones’. Wolves, battles, quests for victory, marauding heroes and merciless tyrants, if there was ever a soundtrack to the books of George RR Martin it would surely be Grand Magus and surely JB has these books at the forefront of his mind when writing, right?

“No, it’s not true and frankly I tried to read the first one on a recommendation from a friend and I have to say I was not impressed. It was too poncey and embarrassing for me,” he laughs, scolding us for the comparison.

The thought of JB as a king beyond the wall, trudging through snow and ice to fight battles in the mountains is within reason though. The bearded warrior is more suited to a fantastical landscape than the drudging modernity of commuter hell, surely?

“I am very very attracted to the former,” he says. “I spend most of my spare time out in the forests or by the sea or in a lake fishing, it’s probably the thing that gives me the most pleasure in the world. I play in heavy metal band and I play with an electric guitar so I can’t deny that world but I’m not interested in technology, it’s uninteresting to me and I’d much rather make a fire and stare at that for an entire evening than chat to someone on the internet.”

But what of music? With ‘The Hunt’ being a labour of love when it comes to JB’s passion for old sounding heavy metal, surely the self-motivated morphing into the literal Grand Magus, the full-bearded wizard who lives in the caves surrounding by his hounds goes against his equal need for a turntable and some decent speakers?

“I love the, if that’s what you want to call it, traditional or classic heavy metal and I also love the early death metal and black metal bands and I’m not at all a fan of the new style of metal. I think the reason is that then there was so much more focus on the songwriting, anything later than ten years ago is not worth anything. I’m that age where I find it very hard to look for new bands, I listen to the new stuff from the old bands, like I think the new Unleashed album is great but I think I’m too set in my ways to look for new bands.”

So if what is our magus listening to?
“Judas Priest, Manowar, Bathory, Dismember, Darkthrone, Bolt Thrower, Rainbow, Uriah Heep, Deep Purple,” he reels off. “It’s a mix of everything that I was listening to when I was growing up but I would say that listening to music comes and goes for me. When you try to do music yourself you get fed up and I would rather have fire around me than bands.”