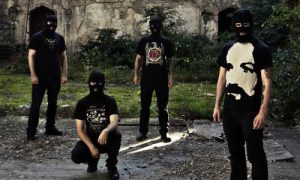 “Dragged Into Sunlight comprises individuals of a very similar mindset and it is a very close knit collective. Anonymity comes with the territory,” according to the vocalist, a slip of a man with hooded eyes and a shifty demeanour. “DIS has no mandate for the reward sought by other extreme musicians. We opt not to divulge details as trivial as identity. The reality is that no one ‘needs’ to know who is making music, it is contemporary musicians who seek such mass approval and often the mainstream publications who facilitate the same ego trip. Simply put, it is not in our nature.”

And even more simply put, fuck your moneygrubbing and attention whoring. DIS are currently caught in the midst of a small avalanche of overseas attention, thanks in no small part to last year’s double gut-punch of signing to Prosthetic Records and corrupting the stages of Maryland Deathfest, SWR Barroselas and Roadburn. Their live performances had already become the stuff of legend in underground circles, and stunned bigger audiences unused to being enveloped within DIS’ unique hell of billowing smoke, punishing strobe lights and hooded figures with backs turned and shoulders tensed. They made their presence felt, and now, the looming release of ‘Widowmaker’ is one more long, shiny nail for the coffin lid.

“Total chaos. A 25 day trail of destruction. It was our honour to share the stage with bands such as Cough, Demigod, Electric Wizard and others,” the vocalist recalls of last year’s tour across the New World. “As a band, the US tour and 2012 in general, demonstrated that Dragged Into Sunlight could tour relentlessly. The reality is, however, that it is not in our nature to do so and we would prefer to focus on creating music rather than elements distracting from our true purpose. It’s unlikely that our schedules will allow for travelling anytime soon, however, we hope to revisit the US in the future.”

In a bizarre aside, several of their collective work very “normal” white-collar jobs when they’re not battling demons in DIS. One wonders how they manage to balance the need to fit into “normal” society with the hateful, acerbic noise that they create. Could one exist without the other’s counterbalance?

“Simply put, they co-exist as polar opposites and one is very much an exorcism of the other. If we weren’t doing this, the world would certainly have a few more maniacs unaccounted for.”
He continues, going on to explain their unorthodox approach to band life in general: “Dragged Into Sunlight is a collective, operating as one entity. If it were possible to define the binding element, chances are that we would not continue to grow. We are as bound and as driven as one another and that is of great significance with regards to the momentum and weight with which Dragged Into Sunlight continues to progress. In terms of rehearsal and writing, it operates with great difficulty and demonstrates the commitment of those involved. We work with likeminded individuals and would much rather have salvage creative input than see it wasted working with those who don’t share the ethic that Dragged Into Sunlight seeks to promote.” 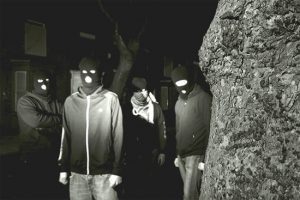 Their ethic – or lack thereof, if we’re talking morality – seeks to destroy, rebuild, and pervert. ‘Widowmaker’ is the band’s latest release, and has already set plenty of heads spinning with its heft, its harrowing atmosphere, startling beauty and just how damn different it is from is predecessor, 2009’s ‘Hatred For Mankind’. It’s heavy, crushingly so, but vast swathes of the composition dwell in melancholy, simple, wordless ambiance, the seeming polar opposite to ‘Hatred…’s howling, abrasive menace.

“‘Widowmaker’ is a different means towards the same end and consequently, an equally deformed limb from the same organism,” the vocalist explains. “There isn’t so much a change of sorts as we anticipate revisiting those influences on ‘Hatred For Mankind’ in the future, however ‘Widowmaker’ follows a different path. It is best described as an offshoot characterising those influences which, although captured on ‘Hatred…’, were not obvious.
“‘Widowmaker’ started life as a shadow and we waited for it to take shape. There existed a very defined idea of what it would look like from inception, however, there are so many variables involved with such a conceptual recording that it really is about everything falling into place. A release with as much to offer takes a long time to formulate naturally. We are not ones to force creativity and consequently ‘Widowmaker’ was cultivated for an exceptional time inside a creative vacuum. The depth and complexity of the recording process is evident throughout and that is perhaps what separates Dragged Into Sunlight from others who feel there is a set pattern or traditional timescale in which to produce recordings. We are content to have waited in order to complete the recording as intended and to do otherwise would defeat the notion that Dragged Into Sunlight is a completely selfish venture for those involved. It was important to perfect our collective efforts.”

Just as practice often makes perfect, hesitation and deliberate action often yields the best results. ‘Widowmaker’ is proof enough of that. It’s 40 minutes of pain, suffering and minor chords woven within a deceptively gentle façade that begin with half-buried, haunting vocal samples, the story behind which will haunt your dreams.

“The opening voice is that of serial killer, Tommy Lynn Sells. Currently serving time on Texas Death Row since 2000,” our interviewee explains. “I visited Texas Death Row in 2006 and in Sells’ own words, ‘when you look at me, you look at hate, because I don’t know what love is’. It is an impressively harsh reality to accept that a human being can be completely devoid of emotion.
“Tommy Lynn Sells is an exceptionally lonely being, in that he is best described as being addicted to murder having reaped no reward from the carving of human flesh other than his own pleasure. There is no motivation other than to cascade his own personal hell and horrific intent onto the lives of others. The words spoken are relevant in context as ‘Widowmaker’ shares a similar intent and passion. There is of course always a discrete beauty to be found in something so hideously ugly and difficult to digest,” we are told. “Similarly to the samples sourced, ‘Widowmaker’ is a lonely being. It encompasses themes of depression, misery, loneliness and loathing. Perhaps a less direct approach to that demonstrated on ‘Hatred For Mankind’. It would be a mistake to think that a conceptual release needs to tell a story. ‘Widowmaker’ as a concept comprises feelings and vibes which are evident to the listener in the first and every note.”

Prosthetic Records mightn’ve have known what they were getting into when the time came to ink a contract with these lot, but so far, the deal seems to be working out alright for both parties. A Faustian bargain is only as good as the devil’s word, after all.
“Similarly to many products, a label assists with recognition. The likeliness that a label will alter the substance at hand is minimal. For Dragged Into Sunlight, it is very much on our terms or no terms,” our interviewee spits. “We don’t ask for a great deal, just that an honest hand is dealt. Dragged Into Sunlight remains very much a beast of its own making and we continue do what we do with or without a label. It is promising however that Prosthetic don’t interfere and demonstrate a similar independence. Prosthetic is a mark of high quality having produced a remarkable back catalogue, and this is indicative of the standards to which Dragged Into Sunlight holds itself.”

In closing, our intrepid subject offered a few thoughts on the state of his British peers. “For extreme metal, the UK continues to follow suit as it has in other genres. Producing a dirge unfortunately overpopulated with routine stagnation and simplification which will inevitably fade. Whilst so many extreme acts can be viewed as a positive characteristic, it is arguable that the UK has little to offer in terms of distinct creative efforts, in comparison with mainland Europe. There are however many great extreme acts within the UK. It is a shame that to date, the majority remain unrecognised.”
DIS are one, at least, that cannot be ignored.