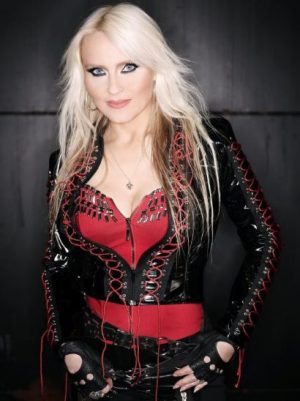 You know life has taken a surreal turn for the better when you’re at an invite-only Iron Maiden party and Doro has just cadged a fag off you (“I don’t normally smoke,” she whispers conspiratorially). Doro is regaling us with tales about her travels. She’s an incredible raconteur, she holds court making us howl with stories about fans bringing her beetles to eat in South East Asia – and all I’m thinking is, wow, this is Doro. She was in Warlock, she was the first woman to front a band at Monsters At Rock. She’s a legend. That was years ago now, we’ve met many times since, but I’ll never shake the feeling of being a “fan”. The dictionary describes being a fan as “a person with an extreme and uncritical enthusiasm or zeal (as in religion or politics)”, but I think they’re missing the words “as in music”, because that extreme enthusiasm manifests itself in an uncontrollable manner when you press play on a new album or watch a musician in the live arena. A piece of music or concert can conjure up the time and place when you first saw or heard that particular artist and take you right back to the lightning bolt moment when you first fell uncontrollably in love with them. They say journalists are meant to be critical and unbiased, but when it comes to certain artists that goes out the window. 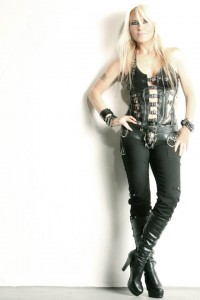 Last month Doro released her 11th full-length album ‘Raise Your Fist’, following an unstoppable tornado of best ofs, live albums and reworkings of some oldies, not to mention the four slices of witchy brilliance from 1984 to 1987 when she fronted Warlock. Of course, ‘Raise…’ doesn’t have the raw power of ‘Sign Of Satan’, the arena stomp of ‘Earthshaker Rock’ or the addictive menace of ‘Touch Of Evil’, but those songs are untouchable classics and when you have a legacy like that it’s hard to approach a new album from Doro with a critical ear. That’s what it means to be a fan.

And it’s the idea of fandom that looms large during a recent conversation with the petite powerhouse.
It’s 11am, the phone rings. It’s Doro. I wasn’t expecting her to call but she’s got 20 minutes to spare before her flight home to New York and says that if I want we can have a quick chat about the new album for Iron Fist. An hour later we’re still talking.

“I think my last holiday was with my parents when I was nine years old. We went to the Black Forest but even that didn’t work out well because I heard on the radio that my total idol back then, Marc Bolan of T-Rex, died in a car accident and then the whole vacation was done. I was just so sad, my parents didn’t know what to do and that was the last holiday we took together.” Doro is talking about her recent trip to Thailand, her first holiday in years. But her story about Marc Bolan rings true; about being such a fan that you’re convinced you know your favourite artists and you mourn them like you would a close family member. No, my parents didn’t understand either why I was so heart-broken when Dio died two years ago. 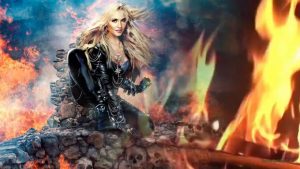 On the new album, from poppy singalongs like ‘Raise Your Fist’ to future festival favourites like ‘Rock Till Death’, the one song that stays with you is ‘Hero’, a tribute to the man that changed Doro Pesch’s life. From the first time she saw him Ronnie James Dio he had a profound effect on her and this song was an important addition to the album. It’s exciting to hear that while I’m a “fan” of Doro she’s no stranger to being a “fan” herself.

“My second tour was with my favourite singer in the world, Ronnie and then we did many festivals together and we opened up for Heaven And Hell about three years ago,” she recalls, her voice shaking with excitement at bringing back the memories of getting to meet her idol. “We did another really fantastic tour in America in 2000 and it was so special because grunge was on the way out. I had the ‘Calling The Wild’ album in the making and I had a new record company and there was a party for the ‘Magica’ album of Ronnie’s and my label asked if I wanted to go. We were really happy to see each other again and he said he loved the remake of ‘Egypt’, which was on a tribute album to Dio [‘Holy Dio’, released in 1999], he said it was so nice.” 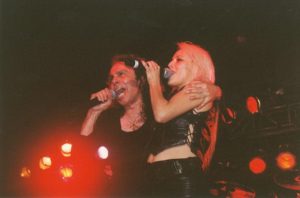 When Doro talks she emphasises almost every word. You can hear the passion in everything she says. She makes a small word like “so” sound like it’s 20 letters long. She’s also so easy to interview, you ask one question and half an hour later she’s jumped from story to story and changed the subject and then back again. She’s a born storyteller. She’s now onto how that American tour came about, but not before going through recording with Lemmy and playing the same venues as Jimi Hendrix and down many other twists and turns. “I did an interview with the KNAC and this lady asked did I have any touring plans and I said ‘not yet’ and she said, ‘how about opening up for Ronnie?’,” Doro is continuing, without pause for breath. “This would be a dream come true! We did actually do a tour in the ’80s and she said Ronnie was calling the radio station in an hour for an interview and should she mention it to him, well to make a long story short a couple of weeks later we were on tour together and it was so special because it was just when metal came back, it was unbelievable. There were a couple of shows in Florida where we always did the encores together and I have some photos and my face is beaming. I look so happy and since then we had a great friendship going.”

Surviving the grunge overload that near stopped Doro in her tracks, that tour in 2000 with Dio came at a perfect time but how does our German guru feel about metal a decade later. Is this is the right time to be releasing an album of such high voltage odes to the genre of music that shaped who she is?

“Yes, I totally noticed it,” Doro near screams when asked if she feels heavy metal is back on top. “I think it’s bigger than ever, definitely as big as in the ’80s. I just heard that Wacken has sold out. It only just happened in August and you know 11 months before the festival is due to take place it’s already sold out. I think its definitely one of the big signs. The heavy metal movement is in full motion and I’m so glad you are doing a new magazine and I feel even better than in the ’80s because we can play in so many more countries. In the ’80s we always toured Europe and the UK and America but now we’ve been to China and Columbia and South America, Russia, Romania; it’s exciting.”

Wacken 2013 will be a big one for Doro. She’s booked to play there and it will be her 30th anniversary of being the ultimate metal queen. But that’s not all. After her first stint in 2007 Doro is returning to the big screen to reprise her role as Meha in the Swiss fantasy drama ‘Anuk-Der Weg des Kriegers’. “It’s coming out 2013, maybe 2014, it depends, there is still so much work to do,” she tells us of part two. “I’m celebrating my 30th anniversary at Wacken and we are also doing two shows in my hometown of Dussledorf in September 2013 and I would love to have some kind of screening of the movie to show the fans but you never know.”

A new album, a massive show down at Wacken, a cinema blockbuster; the highs Doro is facing are a far cry from the tragedy she faced last year. Doro’s a trained kick-boxer and talking to her is like going four rounds of being pounded by sugary sweetness, everything is “so nice” and “so lovely” and “so sweet” and we wouldn’t try to darken this rock princess for all the world, so it pains us to ask her to drudge up the memories, but in true Doro style even she finds a positive in the negative. In August 2011 Hurricane Irene destroyed the home she rents in Long Island, New York. Everything was obliterated.
“It was totally hardcore,” she admits. “I lost everything, the whole place. I tried to save a couple of things but because I had to go on tour a couple of days later I couldn’t take care of it and water is such a lethal thing, everything starts to mould immediately, so I am going back today and eventually I’ll have to get everything new. I learned something from it, that even though I was a little bit sad because some old photos and gifts I got from fans from all over are all gone I learned that I can definitely live without anything and I think that the most important thing for me is the fans and the music. I have a suitcase and I can go from city to city or country to country and sing and hopefully make fans happy. I really learnt from it that I’m not a materialistic person. People used to say to me, ‘what did you buy in all your career?’ but even when we had some successes I always put it back into the show or the video shoot or the next production. Actually I brought something for myself once where everyone said ‘you’re totally crazy’ but I did it for my 25th anniversary concert. I wanted to have a big Warlock behind the drum riser, something that looked like Eddie of Iron Maiden. It was a fortune, I could have definitely have brought a small apartment for it but I wanted to have 30 seconds of mind-blowing experience for my fans. I didn’t see it but on the song ‘Night Of The Warlock’ I thought the warlock needed to be the real deal and for 30 seconds I saw the most amazing looks in people’s eyes. That was all my money and the Wacken people now have it, it’s so big I can never use it again. It look three trucks to carry it. I put my money into that for a couple of seconds of real joy.
“The first time I saw Ronny James Dio was before we did the tour in ’87, I think it was maybe ’85. I was really excited to watch the concert and because I’m so tiny I was standing on the mixing desk and then the curtain was opening up and I almost fainted. It was like the most beautiful and most magical amazing thing for a couple of seconds. My knees were starting to shake. I always remembered the opening seconds of the Dio show and I thought if I could ever make the fans feel close to that sensation I would love it and then on the 25th anniversary I did it.
“So, I’m definitely not a materialistic person,” she concludes, matter-of-factly. “As long as we are healthy and as long as we have something to live for and I’m living for the fans and the music!”