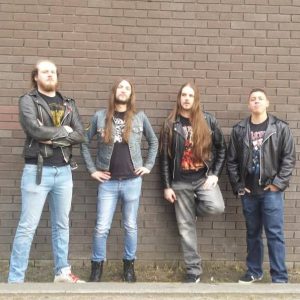 A metallic triumph for the North then? All four bands on that limited 12” are mighty indeed. “I find it difficult to describe our sound beyond classic metal,” Alex continues. “I’d like to think we’re quite a ballsy band that have a sound not too different from the best British bands like Saxon and Diamond Head. The band is an important tool to preach our elitism. On a serious note, the band means a lot to us and has proved a great way to get rid of everyday life frustrations and create music people can connect with.”

With only the split to their name so far, let’s hope Ascalon hurry up with that debut album and to help bring on the new wave of British metal that we’re all hoping for.