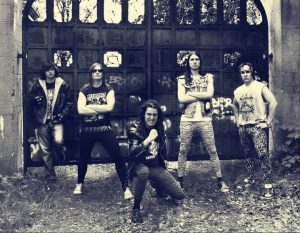 The demise of the local record shop is saddening on many levels, but the pinboards consigned to the skip out back is maybe the most heart-breaking. For where else can you find notices about crates of NWOBHM 7”s for sale, weed-smoking/doom-loving room-mates needed and most importantly little tabs of scrawled phone numbers asking if anyone wants to start a band. For that is exactly how the ’80s obsessed metal nerds of Alpha Tiger met. “I saw a notice on a board in our local music store. Someone was searching for another guitar player so I called him and we met,” explains guitarist Peter Langforth. “It was Alex [Backasch, guitars] and fortunately we had a similar taste in music.”
That similar taste is music encompasses everything from “Metallica, Judas Priest, Iron Maiden, Queensryche, Crimson Glory, Fates Warning and Riot,” which is alright in our book!
The band formed as Satin Black in 2007 and were quickly snapped up by Karl Walterbach, he of Noise Records fame, for his new imprint Sonic Attack, but a line-up change and name change later and the band found themselves on the stages of Keep It True and Hellfest festivals and on Century Media Records for their new batch of high-energy, power metal tunes, ‘Beneath The Surface’.
“We are open minded for every influence,” says Peter. “But I think it’s the voice of our singer Stephan as to why people think we are a ’80s or a retro band. Because, nowadays its very seldom to have a singer with a high and clear voice like we have. We are a very ambitious band. I really hope that our passion become to our profession someday. Our old heroes will go on pension in some years, so someone has to replace them. Of course, we want to make it to the top, but I know that’s a really long and hard way and there are many other great young bands out there. So, let’s see what happens.”
Iron Fist will be watching; the new platter is addictive and exciting and bodes well for the band. Perhaps this will be the year of the tiger.