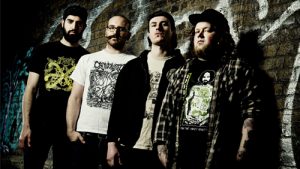 Within ten seconds of pressing play our immediate thought was, “Damn, these dudes got some swagger.” That’s not a typical thought to bubble up when you’re confronted with the kind of grinding hardcore/desperate sludge alloy that Liverpool’s Corrupt Moral Altar have banged out on their first EP, but, there it was, just the same.
“I guess a lot of that comes from our love of rock ‘n’ roll,” guitarist John shrugs. “Just trying to keep it super simple and have catchy songs. We all come from backgrounds of playing in super fast, technical bands and the whole idea of this band is simplicity, and being able to play the tracks when pissed out of our heads: playing brutal music and having fun with it!”
They certainly nail the “brutal” part. ‘Luciferian Deathcult’ (out January 8 via Baitin’ The Trap Records) is positively rank, browbeating its poor listener into an absolute pulp. Ten seconds after first blush, we needed a drink – and so did they, probably.
“The four members got together through their mutual love of getting fucked up and cider,” we’re told. “The band was formed in Merseyside in 2012, all members have been around for years in various other bands, some of them including Magpyes, Reth, Malevolent Creation, Venomous Concept, Horsebastard, Salem Rages and a load of others. It’s being released by the wonderful Rick of Iron Witch on his label Baitin’ The Trap. Rick asked us if we wanted to be the first release on his label after he saw our first gig in Liverpool and heard our rough as fuck demo ‘Needle Drugs’. It’s great to be working with someone who is as into the music and into getting fucked up as much as we are!”
Corrupt Moral Altar may be pretty far off from that old time rock ‘n’ roll (unless we’re talking Jerry Lee Lewis, maybe?) but we like it just fine anyway.