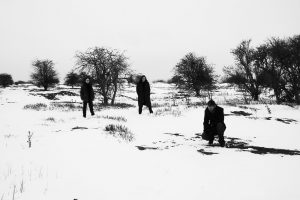 2012 is dead and gone, and by the time you read this, it’ll be as distant a memory as the trees who met their doom to give this story life. It was a good year for a lot of things, and a terrible one for others, of course (the passage of time is funny like that), but, to abandon the bigger picture and hunker down into our black metal bunkers for a few hundred more words, it’s been a goddamn fantastic year for the strange little beast known as British black metal. After years of enduring the dread goblin king Dani Filth’s stranglehold on the title, a good number of UK lads got their collective shit together and released a bumper crop of killer jams that roved from Winterfylleth’s grandiose Northern sagas and White Medal’s crippling Yorkshire steel down into Anaal Nathrakh’s Brummie madhouse and further into smoke with the return of London’s grimiest, Necrosadistic Goat Torture. Toss in Wodensthrone, Code and A Forest of Stars, and Blighty’s not doing too poorly. Now that said banner year has ended, one’s holding onto the hope that the trend will continue to bear fruit, and thanks to the Southern boys in Fen, the first quarter of 2013’s looking bright. Their new album, ‘Dustwalker’, is due out at the end of the month on Code666, and it’s a definite leap forward for a band that have spent the last seven years trying to figure themselves out.

Guitarist and vocalist The Watcher weighed in from his perch behind the palace walls: “English culture does tend to propagate notions of individualism and eccentricity – therefore, it isn’t too hard to see how these acts have evolved. We’ve certainly taken our time here in the UK to develop a ‘scene’ of value though, I’ll say that! As a result of this, I think there is a sense of kinship – perhaps unspoken in some cases but nevertheless there – in that we have all contributed to raising the profile of UK-based black metal from a laughing stock into something that has real artistic merit.

“The key has been, I think, to forge ahead with a path divorced from imitation – all of the above acts have developed their own identity without slavishly following in the footsteps of others. Working in isolation and forming ideas without the preconceptions of a ‘scene’ is also paramount. Some readers may be rolling their eyes now as we are often accused of being Agalloch imitators – this really isn’t the case, I was barely aware of that band until most of our debut had been written! In this instance, I think we just draw primary influences from the same sources and hence there are parallels in some of what we do.”

Agalloch imitators, eh? The Watcher is surprisingly frank in his analysis of everything Fen, and doesn’t even mind if you whip out the ol’ “post-black metal” chestnut in front of him.

“I don’t mind it really. I’m always a little sceptical of people who rail against being pigeon-holes – why be so defensive? If you’re confident in what you are creating, the boxes that more small-minded listeners place you in are meaningless. Musically, certainly the black metal ‘classics’ represent the bedrock of what we are doing. The music has certainly evolved in terms of our understanding of how best to deliver our sound but the fundamental core at the heart of Fen remains unchanged. We always wanted to fuse – and emphasise – a more reflective, windswept ambience with the stark, raw viciousness of black metal. Personally speaking, a lot of the more ambient side of the shoegaze/indie scene has been a real influence over the last couple of years – Slowdive, early Verve, Chameleons, My Bloody Valentine, the list goes on – as well as the post-rock scene (Mogwai, Explosions in the Sky, Mono et al). A twilight stroll in the fens in winter can be massively inspiring, tapping into that quasi-spiritual sensation that sets one’s mind aflame with ideas. These transcendental moments are a real driver, the ‘spark’ that sets the creative fires alight and is certainly a key component in the Fen atmosphere forming.

“At the end of the day, the whole ‘post-black metal’ scene has a fairly clearly defined set of parameters, it acts as an easy signpost to identify some general facets of a large group of bands. As soon as someone digs in to the individual artists, then individuality comes to the fore and they will be judged on their own merits. For me though, I’ve more important ways to spend my energy than rail against genre tags.”

Instead, he and his compatriots pour their energy into their work, which saw The Watcher taking a spot behind the board as well as in front for this round. A lineup change and a very meticulous approach to the recording process meant that ‘Dustwalker’ took its sweet time in getting here, but fans of the band’s deft juxtaposition of darkness and light will undoubtedly agree that it was worth the wait.

“After we lost our keyboard player and drummer at the start of last year, were were determined to ‘come out fighting’, as it were. With Derwydd [drums, ex-Skaldic Curse] recruited, we were keen to show that far from damaging the band, the line-up issues had only reinforced our sense of purpose. It was important therefore in my mind for us to move quickly to get some new music written and recorded, to underline our new-found strength.

“We approached the writing process with vigour, determined to push ourselves further and build on what we had achieved with ‘Epoch’. It flowed very naturally actually – Derwydd was completely in synch with what we wanted to achieve and therefore we were able to exorcise the ghosts of what had been, in some respects, a challenging year for the band and underline where the three of us now stood.

“The instrumental tracking was done with my good friend Barry Haynes in Suffolk, and the final mixing/engineering was carried out by myself. It took a very long time actually – longer than the recording – as we all agreed we wanted each track to have a defined identity, and each song had to be addressed individually. It was painstaking but I think the results were worth it. For me, the sound is organic, unpolished and raw yet clear and powerful. There will always be space for refinement, of course, but for us the production is a fine fit for the music.

“I think it is a strong documentation of where Fen in 2012 is positioned. I definitely feel it is the best record we have put together and I feel truly proud of what we have created here. In terms of the band dynamic, all three of us get on very well and there’s a real synergy between us. All of us appreciate fine beer and as ludicrous as it may sound, this really enables us to bond and enjoy our rehearsing/writing time. Fen was born of a desire to return to the roots of thoroughly enjoying playing music with other people and, while we’ve had our ups and downs, right now it is a real joy to spend a few hours with the guys sampling some fine ales and forging music. It’s the bedrock of the Fen experience for me.”

Charging out of the gate, ringing in their new year with a career highlight and giving other bands a high mark to strive towards, The Watcher, bassist/vocalist Grungyn, and aforementioned sticksman Derwydd aren’t much for resting on laurels or lolling about in front of the fire, though; according to our informant, Fen’s still got plenty of work to do.

“Release-wise, apart from the new album we are in talks about having a vinyl version of [2009 debut full-length] ‘The Malediction Fields’ released. It’ll be a double-LP with a couple of bonus tracks, which we are obviously quite excited about – I’m a big vinyl enthusiast after all. On the live front, we really want to up our gigging profile in 2013 – ideally, we would be looking at some festival slots and/our a decent-length tour, this is our absolute number one priority.”