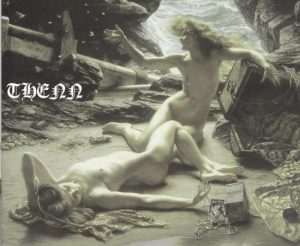 “The name comes from George R.R. Martin’s ‘A Song Of Ice And Fire’; it’s a region beyond the Wall, beyond the Frostfang Mountains,” Josh Zoerner of newjack Indiana black/crust stranglers Thenn explains of his band’s unusual moniker. “We tried to stray away from names that were overt subject matters because we didn’t want to pigeonhole ourselves with a name that resulted in an overarching ‘theme’. Thenn, while a reference, is fairly ambiguous, and the ambiguity leaves room for us to change and evolve without seeming like we’re betraying a genre.”
So no Nuklear Wargoat or Dripping Entrails for this lot, then; they prefer to intrigue rather than bludgeon, and we’re entirely alright with that. Their innovative take on an already mangled sound sets them apart from the trendier “blackened crust” kiddos out there, and their earnestness and genuine passion is impossible to ignore. Thenn caught our battered ears earlier in 2012 with their first release, ‘Threshing The Golden Fields’. The EP’s five songs were offered for free download on Bandcamp, and Zoerner’s anti-capitalist reasoning behind the decision is a nice reminder of their crust roots. “We decided to give it away for free primarily because we felt as though charging money was a ridiculous idea. In a world where music is pirated, what would’ve been the point? We love music, we’re not looking to get rich, we were just trying to get the EP out there for people to hear.” Luckily for them – and for us! – it worked. Thenn is self-described as “blackened crust, sludge, a little post-rock, and some obvious hardcore song structures,” but as far as we’re concerned, they’re just fucking savage. Keep an eye on these lot – they’re going to do big things. “2013 could be a big year for us. Right now we’re about to record our side of the split with Cara Neir. It’d be nice to see some label attention, but in a world where you can self-release things at your own pace we don’t necessarily mind doing things ourselves. All in all, the horizon feels larger than it did in 2012, and creatively we’re in a better, more original place.”