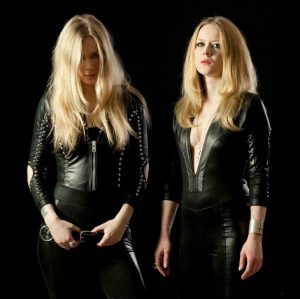 Johanna Platow Sadonis is known to the Fist through her work as a heavy metal promoter and DJ in Berlin, so when we found out that she’d started a new band with Sonic Ritual guitarist Linnéa Olsson we couldn’t wait to hear it. “The stars aligned when Henke [Palm, Sonic Ritual/In Solitude] wrote me a mail that Linnéa had moved to Berlin and was looking to play. He suggested that we should meet. I say the stars aligned ‘cos he did not know I was looking for a guitarist at the time. I’d never met her but the moment we sat down it was sealed. We have so much in common. People ask if we are sisters all the time and in a magical way we are. Soon after my boyfriend, Simon Bouteloup, quit as bassist for Aqua Nebula Oscillator in Paris and moved to Berlin to join us. On a magical side note, before meeting me, Linnéa and Simon had, independently from another, met a psychic and both got told that they will move to a foreign city, meet a woman and they’d play music. Omen est nomen.”

Having teased us online with the single ‘Night Child’, The Oath immediately fill the void left by the demise of The Devil’s Blood, mixing traditional doom, psychedelic rock and proto-heavy metal. Johanna cuts a striking figure, reminiscent of the Queen of occult rock, Jinx Dawson, while Linnéa brings her trademark crusty, loose guitars and love of American doom to the table. The surprise element comes from Simon, according to Johanna; “He comes a bit more from a psychedelic background, which adds just the right twist to our foundation.”

When asked who their main influences are, the German heavy metal maniac is quick to reel off her favourites; “We all have a very broad taste in music with a special part of our hearts dedicated to classic ’80s metal like Mercyful Fate, Ozzy and W.A.S.P. Also old school black metal like Darkthrone, Bathory and Venom, doom like Pentagram and Cathedral, but also loads of different ’70s stuff like Led Zeppelin, Heart, Blue Öyster Cult, Fleetwood Mac, Rainbow and of course Black Sabbath. We’re also huge Danzig fans.

“I’ve been deeply obsessed with music my whole life, which has taken me all around the world to Norway in the ’90s, three years in Los Angeles and now back to my hometown Berlin. I’ve been immersed in the scene since my early teens, and I’ve sung in numerous bands over the years [such as Cryogenic, Dies After and Ferox as well as guesting on an Alice In Chains cover with Secrets Of The Moon]. However, none of them quite hit the spot for me entirely. Last year my close friend, our drummer Vincent Wager from Brooklyn and I sat down listening to old metal, discussing the past and current scene. I realised that I had a hunger yet to be tamed and that I needed to create my own vision so we formed The Oath last summer. We wanted to raise something dark, raw and exciting, with great songs and memorable melodies and riffs – just like the bands we’ve loved and listened to all along.”

The band have their debut 7” coming out on High Roller, the label recently responsible for some of Iron Fist’s favourite new bands; Dead Lord, Axxion and Wytch Hazel, as well as stellar releases from Jameson Raid, Traitor’s Gate and Black Hole amongst others. The Oath are an obvious fit.

“I met Steffen Boehm of High Roller on a visit to Zwickau,” Johanna explains of this dangerous meeting. “I think we all drove to a Motörhead show together if I remember correctly. I think all he knew about me was that I run the Kill Em All club in Berlin but Linnéa had already worked with him for previous Sonic Ritual releases, so we knew we’d be in good sturdy hands for this first release.

“Our debut 7″ ‘Night Child/Black Rainbow’ will be released in June on High Roller in Europe and July 17 on Electric Assault in the US. There will be also a limited cassette tape release of the single on a new little label run by Daniele of Metal Forces Festival. At the moment we are finishing writing our first album, which we’ll take to the studio in June, once Simon returns from the Kadavar tour, whom he just joined on bass as well. Shows to be followed this summer. This is only the beginning!”