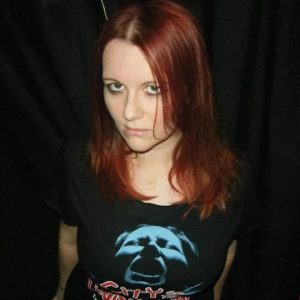 Horror-obsessed and death metal maven VANESSA NOCERA has been on our radar these past few years, whether it’s been through her death/doom band WOODEN STAKE, trashing death ghouls HOWLING or simply through running the ghastly Razorback Records. Now with a new splatter platter from SKELETAL SPEKTRE on the loose KIM KELLY caught up with her to find out how she has the time for all these nightmares

When I was a tiny tyke, I remember singing along to my dad’s Hank Jr. tapes and pretending to interview Tina Turner with my little Fisher-Price radio. Not the most auspicious of beginnings for a budding metal journo (though do I remember throwing a few hardballs at my imaginary interview subjects) but then again, we weren’t all ripped from the womb clutching a Massacre album. Some of us, however… “I have audio tapes of me at age three singing made-up songs about monsters named ‘Shitbones’,” multi-instrumentalist and hellacious vocalist Vanessa Nocera laughs, thoroughly shutting down my nature versus nurture argument. “I’ve been singing since I was able to talk. According to my parents, I have always had a crazy imagination and I’ve always been vocal. I took inspiration from all kinds of musicians and of course when I discovered metal at age seven my influences changed. I would say by the time I was 11 or 12 I was practicing death growls thanks to Chris Barnes, David Vincent, and Glen Benton. In some ways growls are easier, but I try to make all styles challenging.”

Nocera’s peculiar interests didn’t stop at Shitbones, either. “My mom always jokes and says that because she read Stephen King’s ‘The Stand’ when she was pregnant with me, that was what influenced me to love horror movies from the early age of two,” Nocera grins. It definitely had an effect, as her dizzying array of horror-themed extreme metal projects can attest. “Naturally, when I discovered metal I fell in love with the style of music and to me it fit the horror movies and comics that I was indulging in. So my love of horror was definitely first and then I discovered death metal, grindcore, black metal, etc. I’ve just always been drawn to the darker elements of entertainment and real life. I’m not a depressed person; I just tend to take interest in those types of things and those are the things that inspire me to write and play guitar the way I do.”

The way she plays guitar, ladies and gentleman, is downright beastly. Nocera’s latest horrific creation, Howling, have just released their first record via Razorback, the label she runs with her husband, Billy Nocera. The gnashing, thrashing death of ‘A Beast Conceived’ comes nipping at the heels of death-doom reckoning ‘Voodoo Dawn,’ the fourth Skeletal Spectre release – and that’s just scraping the surface.

“I’m in Howling, Wooden Stake, Skeletal Spectre, Orloff, Loathsome, and Scaremaker is finally coming back from the dead – somehow, some way. Now my goal is to get at least a three or four song demo of Cauldron Burial going, I just need to find a dedicated drummer. I’m talking to one that I think is going to get the job done, but we shall see,” she shares, pausing for breath. “At the moment we just received the final mixed and mastered tracks of the upcoming Howling EP, which will be coming out later this year, and in the next day or two I will be recording some guest vocals for a band called Necrorite, which features Uriel Aguillon from Gutwrench, a band on Razorback. Next I’m hoping, Dark Lord willing, to start writing and recording for a special Wooden Stake release. More details later when more things are confirmed on that as well as my other bands.”

It’s a shame to hear that the age-old dilemma (who’s gonna play drums?) is holding back Nocera’s superhuman schedule, especially given that so many of the albums she’s written feature the considerable talents of Elektrokutioner behind the kit. Death fiends may recognise the name from his work with Father Befouled, Encoffination, Decepitaph, Tombstones, Bastard Cross… homeboy’s Metal Archives entry is longer than Fred West’s rap sheet. He features on the Howling full-length as well as on releases from Loathsome, Wooden Stake, and Scaremaker, so you’d think it’d be a piece of piss enlisting him once more. Sadly, it’s not to be.

“Wayne and I are on different waves as of now. I’m motivated to write and record all the time for every one of my bands and he’s focused right now on Ghoulgotha, which is cool since he plays live with the band. Hopefully though soon we will be able to figure out direction with everything especially as far as Wooden Stake goes.”

“I met him through Billy,” she explains, “and it was Billy who suggested Wayne and I work on something together. I had no intentions on doing music after my stint in Wolfhollow, but I picked up the guitar and started reworking older riffs that I had from when I was 14 and when I was in my band Slash Dementia [that name!]. Billy was inspired to write some lyrics and then I started writing lyrics and before we knew it we were putting together the first Scaremaker album. Billy asked Wayne if he would be the drummer and Wayne readily agreed. We flew to Texas, recorded the album as well as bonus tracks for an EP in less than five days, and after some time had passed, Wayne and I decided to form Wooden Stake.”

Keeping in tune with her mile-long resume, Nocera’s been knocking around the black and death metal scenes for quite some time (“Decades? Do I look that old?” she laughs) and started writing songs on guitar when she was eleven years old. But she’s come a long way since those early years – though she still sings about monsters – and so like the case with many other talented metal folk, the path Nocera took was rockier than not.

“I only started in the underground in 2006 when I was trying to get my band Wolfhollow and my record label Demonslave Recordings going. I was 23, moved to Chicago, things were going good and then overnight it seems everything turned sour with the band and I used my record label money to move back home to Kentucky,” she shares. “I moved back, took a year off from music and started back up in 2009 when I met Billy; thus when Scaremaker was born and I was writing songs again. I didn’t pick up the guitar for a year in that time off, so I was full of ideas and I guess I still am if I’m always going. My intent when I met Billy was to just be happy and not be so involved with the record label, but he was excited to work with someone who was actually into this stuff and had talent to help out with lyrics, finding bands, and so on.”

Luckily for him, he’d found someone who could not only help, but take the reins when needed. Razorback Records started in 1998 and has been dedicated to spewing out the sickest and scariest extreme metal has to offer since day one. The Noceras joined forces when the label was already established, but the more it grows, the more work there is to be done, and the cleverer Vanessa has to get with her time scheduling. One assumes that the concept of sleep is a distant memory for them by now.

“It’s hard to balance everything some days,” she admits. “I’m also a full-time college student, so I really have no days off, but it’s the life that I choose and I like it this way to be honest; it keeps my mind going and I’m always finding new inspiration to feed off of. My brother called me the other day and when I answered he said, ‘You’re kinda hard to get a hold of’. I guess certain times of the day I’m always indisposed, but I have a lot of work that needs to get done.

“Needless to say, time management skills are something that I have honed in the last few years. I have also started to leave notes for myself, or for Billy, just to keep up with the label, my bands. We’re doing The Coven ‘zine, which features interviews with Heather Langenkamp, Amanda Wyss, and tons of other horror celebrities, as well as quite a few metal legends and underground artists. We’re also putting together the Impetigo fanzine, the horror comic Vaultwraith that we are writing for and publishing, a special 15 year anniversary release for Razorback, and also preparing for horror conventions. I’m working 24/7 it seems!”

No rest for the wicked. Nocera’s obviously going to be a very busy lady for the rest of the year (and onwards towards eternity). We asked her for a rundown of what she’s got in the pipeline, and had to have a little sit-down halfway through to cope.

“Currently Gutwrench, Oniricous, Blizaro, and of course the Impetigo reissues that we’ve repressed on Razorback. Soon we will have new albums from Offal, Blizaro, Saturnine, and Crypticus, so that’s definitely something to look forward to. As for my music, each and every one of my bands will have something come out later this year, or I will be recording for either a late 2013 release or early 2014 release.”