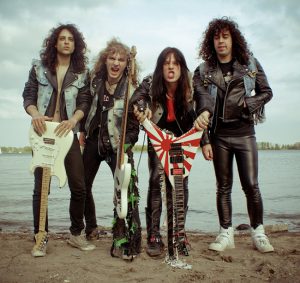 In true, care-free (some might say careless) abandon, Skull Fist founder, frontman and guitarist Jackie Slaughter is doing this interview by phone, while biking to work. “Biking, as in Motorbiking?”
He laughs; “C’mon, I don’t have a motorbike. I hurt myself skateboarding, imagine a motorbike!”

Still, we’re not sure health and safety killjoys would recommend cycling while being interviewed, especially in downtown Toronto where Jackie is on his way to his “pathetic” desk job (“I got the job by lying. Whatever gets me on the road, I don’t care.”) But still, this sums up his live fast, play faster ethos, and Canada’s four-piece – including Johnny Exciter (guitars), Casey Slade (bass) and Chris Steve (drums) – are finally ready to unleash ‘Chasing The Dream’, their second album of traditional-metal-gone-into-hyperdrive.

Alongside Cauldron, Skull Fist are leading the charge for old school heavy metal values in Canada but this album almost wasn’t to be, if Jackie’s skateboarding prowess is anything to go by.
“I didn’t realise how fucked up my face was,” he continues of his battle woes. “The doctor said, ‘Hey man, your face is gonna have some gnarly looking scars’, okay maybe he didn’t use the word ‘gnarly’ but he said something like that. I looked at it and was like, ‘Oh man, I’m gonna be a mutant’. But everything healed perfectly; I’ve got a big scar on my forehead though, I shattered a bone in my cheek and then I cracked a bone above my eye. I almost had to get reconstructive surgery but everything’s fine.
“When Jonny showed up at the hospital I had such a concussion, I didn’t even know who he was. I didn’t know who my parents were, I didn’t even know my name. I accidentally even thought my old girlfriend was still my girlfriend and had the ambulance call her from my cell phone.”

When photos of the annihilated singer circulated online, the shaky future of the band was on everyone’s mind, especially since they’d been due to enter the studio just a few days after the accident. “But my band didn’t even care,” Jackie remembers when asked if he and his cohorts felt the same fear. “[Casey] didn’t even mention the recording and the first thing I did was ask him for a cigarette. I had such a severe concussion so I wasn’t allowed to smoke, but I tried to a lot.
“We had the songs done for the album; some of the songs on the album are about eight years old, but we just didn’t have the money, so we kept waiting and we were planning on recording it in June but when I busted my neck it slowed down the process. It was kind of convenient though because we had just enough money to record and we were gonna be eating garbage for a while so if anything it hindered the process. The album would have been out by now.”

It’s finally ready, due to be released early next year and Jackie’s even been back on the board; “It took me a long time to think about it, you know? I got 12 stitches in my balls once from skateboarding. I broke my collar bone. I broke my hand a couple of times, but skateboarding’s fun, I’m not gonna be a pussy about it.”

Finger’s crossed he won’t stack it this side of January, as the band are heading over the pond to tour with Enforcer and Vanderbuyst.
“I get to get drunk for free,” he says about the upcoming jaunt across Europe. “Actually, I don’t think I did get any free beer last time, now I think about it. Of course I’m excited; I get to play songs, and hopefully people will like them and sometimes someone will say ‘oh your music is the best;’ and then you get to get drunk with them. I used to go see bands and meet them and they’d be total arseholes and that’s just not cool. I’d be like ‘Killer show, let’s party’ and they’d take off and hide backstage, so now every time I play it’s a chance to be cool with everyone.”

So, what if we offered to take you out to the local spots in London? Would you be sensible for the sake of your body and bandmates?
“Of course I would go skating! Last time I went to London was fun and actually some girl showed me her boobs while we were playing. I thought it was almost shocking; all I did was yell ‘Oh fuck yeah’ and just stare. Things started to unfold and you end up drunk in an alleyway with your pants down. I don’t have a girlfriend so why not?”

Tour skate sessions, drinking sessions and yeah, that other thing aside, Skull Fist have the songs to back up their wild behaviour but even Jackie seems surprised at how long they’ve kept it up, with absolutely no signs of slowing either.

“Wow, it’s been almost eight years since Skull Fist. When I say eight years I think I’m actually under-exaggerating; I mean ‘Call Of The Wild’, from the new album, I think I wrote that before Skull Fist even started. I just spent the first five years in Toronto starting a band but never did anything with it, I just got drunk for five years. I guess that’s why some of the songs on this album are so old – I wanted them to be recorded and hear what they would sound like, instead of just being a shitty demo done in a basement.
“I’m from Porcupine, Ontario. Population 3,000. Fucking ten hours north of Toronto,” he continues of what made him escape to the big city. “It’s really fucking cold. The biggest city in the area is called Timmins, which is where Shania Twain is from. It’s a total hick city. Every time I went to a bar I’d get the shit kicked out of me. I’d win some, I’d lose some. There’s no metal scene there at all, I think I know three people there who like metal.
“But I used to get bands to come up. I brought Anvil there a long time ago before they got all giant. There was about 20 people at this really sketchy bar and no one knows this, but if you check out the first Anvil record, in the liner notes they thank the Porcupine Free Health clinic, which is my little town and I guess they used to go there in the ‘80s when they played Timmins and get a bunch of free drugs, which I thought was cool. So I said to them, ‘Hey, you wanna come back to Timmins?’ and I was 18 at the time. I did the show and the person who owned the bar wouldn’t even let me watch the show because 19 is the drinking age here. I had to sneak in, so I got banned for that… well I did piss all over a fax machine…”