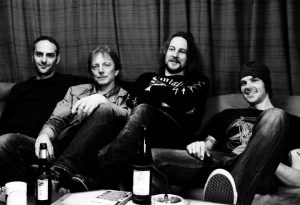 With albums from Atlantean Kodex, Argus and Age Of Taurus riding high in our albums of the year lists, and of course the final ever album from the true masters, Cathedral, it seems that traditional doom, steeped in the roots of heavy metal, is, once again, genre du jour, and now Esslingen’s Mountain Throne are joining the ranks with their debut album ‘Stormcoven’ on Cyclone Empire. Forming in 2009 guitarist A tells Iron Fist that he, “always wanted to have a band playing this ancient kind of metal” and had been writing songs in that vein for years. Drummer J joins A in the doom band Mirror Of Deception, while cracking singer F and bassist S are in the power metal band From Beyond, so the cachet is hot for this German four-piece. When asked what attracted them to the traditional doom genre, A says firmly, “It’s the choice of champions really, isn´t it? There is a sense of a tradition… knowing where things came from and how they developed. Real heavy metal and classic hard and heavy rock are incredibly soulful. In real metal you definitely have that spirit. For me, this magic is epitomised in the songs of Black Sabbath’s ‘Heaven And Hell’ album.”

With the band citing Dio-era Sabbath, Iron Maiden, Cirith Ungol, Deep Purple, Saint Vitus, Trouble, Rainbow, Bathory, Cathedral and Scorpions amongst others as an influence you can see why Iron Fist is so keen to push this band on you all. There’s a devotion with Mountain Throne that is beyond compare, even though they describe themselves as simply: “Four empty minds and hundreds of watts!”

Don’t expect the band to be touring near you soon though; they’re adamant that they won’t be a full-on gigging band but will play the “right occasion with the right bands.” With an EP and a split with Procession also under their belts the band are keen to head back to the studio in 2014 to start work on their second album, leaving us with these words of dedication: “We just want to – and will – play the kind of heavy metal that we want to hear. There is no choice: we have to do it, there is no way around it. No matter what, spirit prevails!”