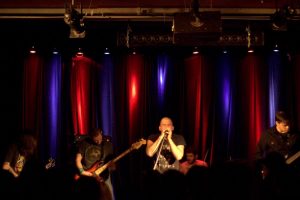 “We all got into playing music through hardcore and punk bands because it’s accessible and there’s historically been a big scene for it in Massachusetts,” guitarist Chris Corry explains. His other bands Mind Eraser and Death Evocation (amongst numerous others) seem like the polar opposite of Magic Circle’s masterfully melodic songwriting, and yet, it’s crystal clear that the riffs he writes comes straight from the heart.
“Having known everyone in the band at least 10 years, this is a group of people who’ve always listened to a lot of old heavy metal and album oriented rock. We’ve listened to bands like Sabbath and Rainbow and Trouble for a long time, and it resonates with us in a meaningful way. Eventually you just want to write music that you feel pays tribute to the way the bands you love make you feel. I’ve played in a lot of bands and that’s the sentiment behind all of them. We took our time with it, in hopes that when we had a finished product people could see that it wasn’t just a diversion but something that we were serious about.”

It’s been a long time coming, too, ever since Corry’s parents bought his 13-year-old self a guitar to abuse them with. “I was so terrible my parents hated it,” he laughs. “When I was 15 I had friends who were into hardcore and punk and I started buying that stuff and going with them to shows. That was my teenage years in a nutshell. When I was in college I started listening to metal bands too. There were record stores I would go to a lot that had a lot of punk and metal stuff, but the metal LPs would be priced cheaper. Like I could buy three Maiden LPs for $5 each, and when you’re like 20 and stretching all your dollars as far as they’ll go, that’s a good deal. So I mean that’s been most of my adult years, you know?”
Massachusetts has long been a seething hotbed for extreme music, whether it be punk hardcore, metal, or, more often than not, a bastardised mixture of the three. Corry’s bandmates are a perfect example, as bassist Justin DeTore splits his time between Innumerable Forms, Boston Strangler and Death Evocation, while drummer Q pulls double duty for Doomriders and guitarist Dan Ducas is in Metal and The Wrong Side. Vocalist Brendan Radigan, whose soulful pipes soar over mournful riffs and triumphant leads, spends the rest of his time shredding the fuck out of them in hardcore/thrash outfits Mind Eraser and The Rival Mob. The ends justify the means, and their diverse background undoubtedly adds a little extra gravitas and integrity to the proceedings. “I like to think all the people in this band march to their own drum so I don’t feel like anyone here was ever the type to only play in bands that sound like Stalag 13 or something,” Corry agrees.
The album came out way back in January with the help of Boston institution Armageddon Shop – one of the best damn record stores in the nation, and crucial supporters of the MA music scene.
“When we finished the album we really had no idea what to do with it. It just sat there for six months, unmastered,” Corry explains. “They rescued it and got it out there a little bit. We’ve known the dudes, Ben and Chris, who run it for a long time and I felt like it would be easier to work with local people who we already knew, and who know how to put out and distribute a record.”

As far as promotion goes, Magic Circle follows a philosophy surely borne of Corry’s time spent sifting through record bins in search of gold. “It has been a low key approach but I feel like bands now are so in-your-face with every little thing. It’s too much for me. It’s not that I want to be deliberately obscure, but as a fan and someone who buys music habitually, I hate having things shoved down my throat. People are smart enough to figure out what they like for themselves.”
The band only got together in 2011, but have become something of a cult hit on the East Coast and otherwise almost in spite of themselves. Magic Circle have been fairly quiet, only playing shows sporadically and, until this year, releasing just the one single. One hopes that the band hasn’t been relegated to dreaded “side project” status.
“Magic Circle is a top priority for every member of the band but no one wants to overexpose,” Corry reassures us. “We all do play in a bunch of other bands and also work full time and have personal obligations. It gets a little tougher to juggle everything the older you get, and we like to be prepared when we play. But we try to make every show we play worthwhile for us and the people that come to see us.”

Sounds like that time might come sooner rather than later, if the dudes have their way. Be forewarned, and until then, go buy their damn record. You’ll thank us.
“We are going to keep playing for sure. I would really like to get over to the UK and mainland Europe sometime next year, but I’m not sure what’s on the cards just yet. We have about half of the next LP rehearsed and written and more is coming along so I hope a new album in 2014. We played on Halloween and debuted a new song that the crowd really seemed to like, and we had a lot of fun playing it live for the first time. We’ll hopefully see everyone in 2014!”