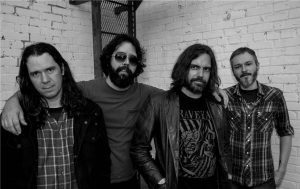 “There are many things that attract me to this music,” he continues of why he chose this style. “It’s just good rock ‘n’ roll. I’ve always been equally as inclined to spin a record by Iron Maiden or Judas Priest as I would a record by the MC5 or the Stooges. But at the same time, when you listen to a group like Pentagram, for example, you’re getting a little something extra from the experience. The darkness these bands convey through their music is very powerful and captivating, and it can really trigger your imagination.
“It goes without saying that our main influences are the great heavy bands of yesteryear, particularly the darker edged bands like Black Sabbath, Deep Purple, Iron Maiden, and the second generation bands like Pentagram, Witchfinder General and Pagan Altar. We also like a lot of the contemporary bands that are carrying on this tradition.  There’s a lot of great ones out there, but Electric Wizard, Sleep, Graveyard, Uncle Acid And The Deadbeats, Hour Of 13, Yob and Witchcraft are the ones I seem to keep in regular rotation.”

Of their debut album, out now on Soulseller (‘Leave The Light’), Erik reveals that, “Our themes are either based on fantastical occult things, like the works of classic horror writers like Lovecraft and Arthur Machen, or those internal struggles you feel from witnessing a world around you that you feel is going all wrong. There’s no getting around it. The world is an incredibly dark place these days. Every day you see death, disease, corruption, and the slaughter of innocents. It is impossible to make sense of these things, but if you can channel that confusion, gloom and hopelessness into music, you can reroute those feelings into an energy that helps you cope with the darkness.”