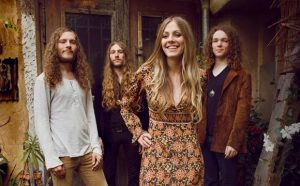 “I lost my job in Sweden and I decided to just go and try to find myself.”
Blues Pills singer Elin Larsson was 21 when she made that decision. She packed a bag, left her hometown and followed the trail to Laurel Canyon, a journey taken by many in the ’60s, heading West to where music was at the heart of LA’s counter-culture. But this wasn’t 1967, this was 2011. When Joni Mitchell sung the words “I am on a lonely road, and I am travelling. Looking for the key to set me free” she had no idea how decades later voiceless girls with songs in their hearts would head down the same road, with the same yearning to be heard.

Once in LA it wouldn’t take long for Elin to meet drummer Cory Berry and bassist Zack Anderson, although the shy Swede won’t admit how or when. “We became friends,” is as much as she’ll give away. “It’s so rare to meet people, and later when I met Dorian [Sorriaux, the band’s French teenage guitar virtuoso], to have this sort of connection, becoming more like a family… before I always felt kinda alone and I didn’t when I was with them.”

This camaraderie gave Elin the confidence to get out the songs that were burning a hole in her soul, and thank goodness, because Blues Pills are the upper the contemporary hard rock music scene needs to take. On their self-titled debut album, which follows the 2012 ‘Bliss’ EP and a live album put out earlier this year by Nuclear Blast, there are rip-roaring rock belters like ‘Devil Man’ and ‘High Class Woman’, smoky blues numbers that drain your soul such as ‘Little Sun’ and ‘Astral Plane’ and jams that make you jive like ‘Gypsy’ or ‘Jupiter’.

“We start to jam and we started to play music for fun and then we ended up recording,” Elin recalls of that trip across the pond. “Now, I’m the Swede and was like ‘No, don’t put it out’ and them, American-style, said ‘Fuck that, up with this thing online’. They posted it everywhere. But I’m happy that they did.”

It wasn’t long before Dorian heard the tracks on the internet. “I had a band with a couple of friends and we opened for Zack and Corey’s old band so that’s how I got to know them,” he explains of how this now-international band got even more global. “We kept talking on Facebook and when they started Blues Pills they quickly sent me the link and I got into it. Then they moved to Sweden and had this tour in Spain so they asked me first to record a few tracks that became the first EP and then they asked me to meet them in Spain and I joined the band.”

“Then he moved to Sweden,” Elin chimes in. “When he was 17!”
It sounds almost precocious, that a girl of 21 and a guy of 17 can move halfway across the world, give up everything, to then live in a one-bed commune-style apartment in the blues rock capital of Sweden, Örebro, to form a band, but they both agree that “You go where the music takes you.”

Although not even 20, Dorian is a phenomenal talent, recalling the likes of Paul Kossoff and Rory Gallacher. “I started when I was nine,” he explains of his guitar career so far. “First it was Billy Gibbons [that got me into guitar], because that was the first blues guitarist I heard, when I was about five or six years old. My parents introduced me to this kind of music, especially my dad. He plays the bagpipes. I’m from Brittany in France and that’s a big part of the culture so I grew up with that tradition, hearing bagpipes every day. I used to play drums in a marching band when I was three-years-old.”

“I grew up with my dad,” Elin recalls of a similar music-filled upbringing. “He was a music lover and listened to everything and I think that was something that I took with me as I love a lot of music. He loved The Beatles, he’s the biggest fan. When I went to high school I met some guys from my class and they got me to sing Black Sabbath with them and so I started listening to more rock.”

And that is how Black Sabbath paved the way for Blues Pills. All it takes is one jam session in the basement of a local high school. It’s unsurprising that Elin was picked to hang out with the kids who wanted to emanate the godfathers of heavy metal, that voice is unreal. “I’m classically trained,” she says, modestly, not wanting to draw too much attention to herself, happier heaping the limelight on her guitarist friend. “I sung classic music a bit, but today I definitely would not be able to do that. I learned all that technique but things have changed completely from when I learned so I just go with what I feel. It’s actually funny because when we recorded the album they [referring to her band] were always like ‘You have to be on the one’ and I’m like ‘What? Fuck you’.”
Aretha, Janis, Ella, the great soul singers were never on the one!
“[Laughing] Exactly! I don’t feel it. Where should I come in then? Live, we improvise so much, which I think is what is so cool about playing with Dorian. He inspires me, so when he goes off with this incredible solo I haven’t heard before I’m like ‘Wow, what the fuck?’
Dorian: “It keeps us spontaneous.”
Elin: “Definitely! Blues Pills are like a family for me. We hang out every day, sometimes we argue and we always take care of each other and I would not be able to do this if it wasn’t for these guys as we have such a good connection.”

Apart from the reference to Sabbath, most readers of Iron Fist might be wondering exactly where a band that cites Janis and Free belongs in a heavy metal magazine. Honestly, we’ve wrestled with the same demons. Discovering the band at Roadburn Festival in 2012 to them playing slots on festivals like Muskelrock and Hellfest and a signing to Nuclear Blast, it seems that Blues Pills are fast becoming accepted by the metal fans. “Metal people are more open and know more about the roots of music and I think that’s why they like us,” is Elin’s take on this road the band have been given.

“The music we play, that’s where the metal comes from, so that would make sense as to why there’s a link, but I don’t like to see music as boxes, like metal or blues,” is Dorian’s opinion.

“And it’s so cool,” Elin smiles. “Seriously the best moment ever, this very big, middle-aged metal guy came up to me and said I ripped his heart out and he cried. That is the coolest thing I ever heard because he looked so metal and I would never think this guy would say that to me. It’s crazy. I never would have thought that this would ever happen. Just being in London, taking to magazines and playing shows, I never thought that would happen.

“It’s so funny, because we’ve been to so many airports and I’ve always seen those signs that taxi drivers hold up at the arrivals gate, always joking maybe one day our name will be there. Fancy rich people come up and say ‘Oh that’s mine’. I always said it would be cool if one day that would be me and today it was! That was a cool moment. All you need to do is believe in your music and now we’re on the same label as Slayer! When I think back to my class, the guys who wanted me to sing Black Sabbath, I’m so thankful they wanted me to do that.”