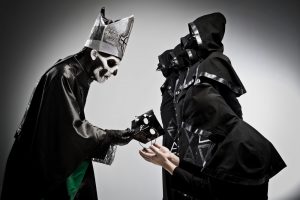 With a third album ‘Meliora’ (latin for “better”, an apt name indeed) out this summer, sounding more avant garde tinged AOR than true doom, we met with the band’s anonymous spokesperson to discover that the ambition that Ghost set out with in 2010 has not faltered, and it’s made them even more determined to rise above (no pun intended) their original intent to spread the gospel of the diabolical far and wide, and if that means playing to more than 100 people at a “true cult” festival, then so be it.

“We chose not to conform to the dogma, the puritan way of the most anal part of the traditionalist scene, because we are non-conformists,” he says, in jovial aversion to the way some sections of the underground music scene have chosen to cease their love affair with the Ghouls. “We don’t buy into the idea of everything being formulaic. That is not to say everyone moving within those circles are followers of that, but I think we had to go from clarity to clarity in terms of showing our intentions and our colours. We had to move with that or stagnate. It’s fair to say we were given an opportunity that not everyone is being given and it’s easy for anybody who’s not being given that chance to frown upon anyone who is. You can think about how we sound or if we aren’t Mercyful Fate enough, I don’t care. I’m not asking anybody to like us, but it’s hard to take criticism seriously if it’s based upon us not being on the right label.
“Sometimes it’s hard to talk about this because I’m very much raised in the underground circuits where I know what things are considered as sins, but I cannot look past that it’s actually a pure doom way of thinking. Isn’t that some sort of fucking rebel spirit?”

Of the new album, He says; “It’s basically a lament for modern man and what he has become but it’s definitely an ironic take on this zenith we’ve reached, where we are so perfected in everything that we have, and people are very, very lost, very unhappy.
“[As for the musical direction] Klas [Åhlund, producer extraordinaire who has worked with pop luminaries such as Kylie Minogue and Madonna] comes from a hard rock background. He started as a shredder sitting in his basement listening to Yngwie Malmsteen, Uli Jon Roth and Ritchie Blackmore and he was very insistent that we, as much as we’re taking steps towards perfecting the AOR quality of the choruses, he really reminded us that whatever we do, we shouldn’t leave the hard rock behind. So every step we’re taking towards a more commercial chorus we need to add something somewhere else in the song.

“We’re also fans of a lot of progressive music, from the really big bands to some really eclectic, weird ones, and he also spent some time playing in a Genesis-style jazz band, so there needed to be that element in there. It comes from a great love of trying to harness the craft of making a moving song. A moving song, in one definition, is commercial, but it’s not something you necessarily do for monetary means. It’s more of a want to perfect your song to the point where you feel you’ve done everything possible. You want to open up the vein basically.”

Perfect ‘Meliora’ may be. It’s polished, with swathes of light contrasting the darkness of the demo that catapulted them out of their bunker five years past. However, the message of Ghost, which was always to spread Satanic Panic, has not been forgotten. Although they’ve been careful to avoid the ire of the Christian far-right in America, where they spend so much of their time recording and touring (despite most of ‘Meliora’ being produced in Stockholm), they did recently come under fire when preparing to film their latest video, ‘Cirice’, at the Centre for Philosophical Research in LA, as they wrongly presumed Ghost were a religious organisation. 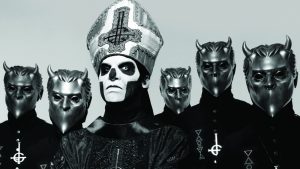 “He thought we were promoting a religion,” the Nameless Ghoul laughs. “Which obviously is a huge fundamental understanding of the entire concept of the band. We are assimilating a religion to set an example of how dangerous it can be. I think it’s important to shine a little light onto the fact that in essence what most bands have been talking about, with a few exceptions, is often a cultural Satan. There is a cultural Satan and there’s a philosophical Satan, which are two different things. And I dare anybody within the underground scene to say that they didn’t fall in love with the cultural Satan first. And I think it’s very important to differentiate between the two. And there is the idea of Satan as a rebellious figure who we sympathise with, because we are rebels. Throughout all three records we’ve been trying to paint a picture of the absurdity of linear religion.”

His thoughts on the philosophy of this subject are fascinating, joking that he could write a book on it but five years after the band formed it did seem that their success helped to shine a light on many already active occult or philosophically Satanic doom bands (Sabbath Assembly, Blood Ceremony or The Devil’s Blood for example) and spearhead a trend where hundreds of bands who took the same Blue Oyster Cult meets Pentagram template would spring up in their stead, from The Tower to Ancient VVisdom to Lucifer. When Ghost started to sell their debut in unprecedented quantities for an underground debut, it seemed like every label wanted their “Ghost”. What does our ghoul think of this phenomenon now the vogue has reached fever pitch with even high street fashion stores promoting “occult” trends. Did these bands just not get the joke?

“No, you have to understand that just because we are playful in our ways to orchestrate our own band it doesn’t mean we’re joking,” he says, firmly. “I understand that it’s hard to intellectualise what we’re saying, because we could be considered unserious next to some other very serious bands, but we’ve never really seen ourselves as part of a movement. And even though, maybe now a few years later, I can see a pattern where what you are saying is prophesied, I am proud, in the sense, that we un-deliberately are a part of a movement and if what we have done, or are doing, is inspiring others, be it occult bands or other bands, then I’m proud of that but,” he pauses, and then laughs, “but I don’t spend a lot of time thinking about that.”