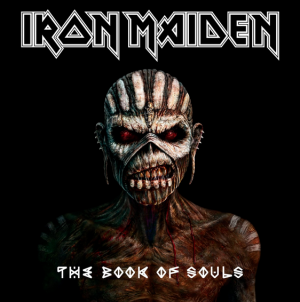 Bruce Dickinson tells This Is Rock that it was Steve Harris who came up with the idea of basing the next Iron Maiden opus on the Mayans but it was Dickinson himself who wrote the opening track ‘If Eternity Should Fail’. In fact, he’d written it for an upcoming solo album, but when Harry heard it he knew he wanted it to open ‘The Book Of Souls’. And it’s so perfect, because if ‘The Book Of Souls’ is Maiden marching upon the Mayan ruins of Mexico, then it’s this opening number that will take them there with its eerie introduction, luring you once more to “Speak with the Shaman again”, travelling down a desert path to the Mexican border, through desolate Texan ghost towns, followed by a supernatural mariachi band. This is Iron Maiden perhaps at their bluesiest, this is their crossroads, this is where they swap their souls for passage to their next great achievement (of which there have already been so many). When the guitars kick in and that infamous galloping rhythm takes control you are immediately entranced by the Shamanistic Eddie of the album’s front cover. Iron Maiden have always been magical, possessing the voodoo to make you submit wholly to their tricks and by the 4-minute mark on this 8-minute ritual you are under their spell again. The lyrics call for “strange believers” and we always have been. The Western tinged guitars carry you over the border into the cave of Dr Necropolis, our guide – the harvester of souls. Take ours, we are yours.

Track two, ‘Speed Of Light’ is written by Dickinson and Adrian Smith, and fans will know that it’s Smith that writes the snappiest, most singalong songs of the Maiden arsenal and this does not disappoint. It starts with an almost Sunset Strip bravura of an intro, and Bruce’s wail lifts the spirits. This is not a sit-in-your-chair song. These guys are pushing 60 and are still churning out songs that have more zest and more energy than bands a third their age. This track happily reminds of Killers-era Maiden, albeit with a bit of Gary Moore showmanship on the fretboard to confirm that they’re no longer just those kids from the Cart & ‘Orses. There are, of course, that certain type of metalhead who wishes they were, and pipe down, there’s enough on ‘The Book Of Souls’ to stop you moaning about the prog bits… and yes, they do appear to later on down the line.

Track three gives the band, and listener, a breather, but it’s when Iron Maiden roll out their slowly building ominous epics – think ‘Children Of The Damned’ or ‘Seventh Son’ – that you know from the off that the song, while it starts low and slow, is going to take you off on the ride of your life. ‘The Great Unknown’ is a Harris-penned track and is suitably bass heavy. Let’s hope your sound system does this justice. There is deft soloing from, we presume, co-writer Smith, while Nicko McBrain delivers a masterclass of intricate drumming that pushes this song along. More cowbell!

There is some real familiar comfort in these Maiden tropes. ‘The Great Unknown’ could be written by no other band and while constantly progressing and evolving the band never lose sight of what made us love them in the first place.

‘The Red & The Black’ takes us back to that otherworldly mariachi band of the opening song but bursts into a Maiden-esque gallop that runs for the pyramids. The pace of this Harris-penned album highlight is going to be a sure centrepiece of the band’s set when they hit the road next year and this maniac Maiden fan can’t wait to join in on the chorus ‘whoah-oh-ohs’. At 13 minutes long, it’s one of the lengthiest songs ever written by Harry and co, but never gets tiresome. It seems to be a partner to ‘The Trooper’ in many ways, in both lyrical content and vibe. The mid-section inexplicably goes all ’80s American soap opera theme tune, which makes this writer pine for that ’87 Florida shirt more than she ever did before. There’s always room for an AOR guitar solo on any album, right?

Track five, ‘When The River Runs Deep’ is another Smith/Harris collaboration – in fact they take charge of the lion’s share on this album – and is the most ‘Final Frontier’, for those listeners expecting a smooth transition from the last album to the new one. It’s also guitar solo-tastic, with all three axemen getting their turn to show off. The band are still clearly riding the high that came from that 2010 masterpiece. It was the album that gained them a newfound popularity, and well-deserved place in the spotlight, with thanks in part to the relentless touring and ‘Flight 666’ and ‘En Vivo’ films that flanked its release on either side. ‘The Book Of Souls’ is already, not even halfway in, such a colourful album with knowing nods to their Soundhouse days right up to their most recent work, which should excite fans from all eras of the band, but mostly those who when asked what their favourite album is, just (rightly) answer ‘All of them!’

Closing up disc #1 – seriously, how cool is it that we get a double disc of Maiden mayhem? – is the title track, ‘The Book Of Souls’. That Spanish acoustic is back conjuring up a tumbleweed atmosphere of dusty despair. Bruce sings of it being “time to face the demons” and the song is as menacing as ‘Powerslave’ or ‘Fear Of The Dark’. Bruce is singing his heart out on this – and in hindsight it’s emotional knowing that it was while recording that he realised something was not right with his throat. Ever the “trooper” he wasn’t to let a trifle like cancer stop this moment of glory. At the 5-minute mark when the guitars take over the chorus and lead us racing for the finish line you can’t help but feeling if ‘The Book Of Souls’ were just one disc it would still be a resounding triumph. But we have another to listen to…

‘Death Or Glory’ is a gob-smacking fanfare to open up disc #2 with. Straight to business, it’s a classic Iron Maiden attack – all guns blazing. Headstocks pointing to the crowd, feet on monitors, we can imagine Bruce jumping off a speaker stack before launching into that first line “I see the enemy, I know he can’t see me”. Smitho does it again. 70,000 people will soon be screaming this chorus right back at the band. Death Or Glory? Is that a question Iron Maiden even need to ask?

Straight into ‘Shadows Of The Valley’ and it’s a Gers/Harris collaboration, the second after the title track, and it’s worth remembering that it was this combo that gave us ‘The Talisman’ on the previous album, one of the most progressive, epic and soaring songs of ‘The Final Frontier’. Could it be that the third guitarist, despite looking the most traditionally heavy metal with his cut-off shirts, painted on jeans and high top sneakers is the secret prog-head in the band? This is similar to ‘The Talisman’ in scope – yes, it’s “epic” (a word that comes to the fore throughout the two discs) but it’s got the pace, the speed, the pulsing drive, the lofty vocal lines that put the Maiden stamp on any of their outlandish wanderings.

‘Tears Of A Clown’ is next and we’re back to a Smith/Harris combo. So far so good from them on this album. This is a difficult song, it’s a great Maiden song, of course, but sounds like it could be written by any of the thousands of Maiden-inspired bands in the power metal vein. Maybe it’s the subject matter and the ease in which the simple lyrics tell the tale of a clown with the hump, but it feels like this could be an Edguy song. A really fucking good Edguy song though. Obviously. Perhaps not one destined for the live set.

Dave Murray gets his only name of the door here, with this song written by him and Harry. Tucked away as the penultimate song, this is all now gearing up to the zenith of ‘The Book Of Souls’, the most-talked about and anticipated song, the 18-minute closer. We need a descent before an ascent and ‘The Man Of Sorrows’ is a well-worn Maiden custom; the ballad – 6-minutes of Bruce tugging at the heartstrings while the guitars gently weep.

But we’ve made it, this is moment everyone’s waiting for. And worried about. Yes, there have been some grumbling online in fear of the longest Iron Maiden song ever. Have they gone completely pretentious? How could “more” Maiden ever be wrong? Starting with a delicate piano solo from Dicko himself and sorrowful violin and cello underpinning its majesty ‘Empire Of The Clouds’ is perhaps Maiden’s finest accomplishment. On ‘The Final Frontier’, the denouement was ‘Where The Wild Wind Blows’, a jaw-dropping delicacy that highlighted just how capable Iron Maiden are of straddling both worlds; the galloping heavy metal torchbearers and the masters of musical art deserving of Brits Awards and Silver Clef trophies. If, like this writer, you are still knocked by ‘Where The Wild…’s beauty then wait until you hear this! “To ride the storm, they climbed aboard their silver ghost…” whispers Dickinson, beckoning the listener into hear this true story of the R101 Airship, which crashed over France in 1930 killing almost all on board. It’s a story much like the Titanic, an engineering feat that could have made all in England proud, but its fate was tragedy. Maiden fanatics are already in the know about Bruce’s current involvement, and obsession, with bringing back airship travel so you know this song is a real labour of love and passion drips with every word. This is heavy metal operetta, pretentious much? No. No way. It’s too heartfelt. Before long you’re there, on the R101, flying about the clouds. Dickinson weaves imagery that puts you in the centre of the storm, while Nicko’s martial drums beat out a weary tattoo and the guitars and keyboards build to a crescendo that makes the heart swell. As the song builds – and you know it will, it is Iron Maiden after all – you’re all too aware that Bruce, Harry, Dave, Adrian and Janick have taken flight but will be returning. They’ve survived personal storms in the five years since their last album but as a band, they are unbreakable. Long may they reign.