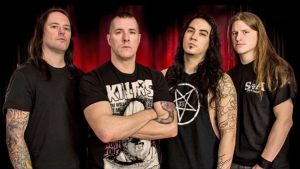 “I have chosen you my friend, you’re mine
Locked inside this frightening dream
Nowhere to hide
Every night my demons you will see
An apparition festival, through hell you’ll ride”
‘Phantasmagoria’ 1986 demo

…On how disco rocked his world
“When I was a teenager, even before that, ten-years-old, it was disco and that’s my earliest memory of music. Then out of that there was ‘I Was Made For Loving You’ by KISS and this Rod Stewart song ‘Do You Think I’m Sexy’. I remember these two bands from when I was a kid and I thought those guys were rock ‘n’ roll. My aunt was always playing Rod Stewart and it was nothing like this disco stuff and then I heard ‘Saturday Night’s Alright For Fighting’ by Elton John and there was some loud, riffing guitar and as a kid, I was like ‘Whoah’. Then I got into Sweet’s ‘Desolation Boulevard’; ‘Fox On The Run’, ‘Ballroom Blitz’, but then there were other songs on that record that were pure evil, dark, like ‘Into The Night’ and ‘Set Me Free’. It was psychedelic meets the beginning of heavy metal and doom, then you discover Black Sabbath, Iron Maiden, Judas Priest, and then Ozzy went solo, then it was Scorpions, Accept, Loudness, Van Halen, it just progressed from disco to hard rock to heavy metal and then all of a sudden it’s Venom and Slayer. Day or night I just wanted to hear music, so basically, in a nutshell, over the course of 15 Annihilator records you can go, if you really want to, through every song and you’ll find one minute there’s a classical guitar piece, the next there’s a goofy song, the next is a punk song, then you’ll find heavy metal, which encompasses everything from Priest and Ozzy and Scorpions. I mean they would do ballads, love songs, and then there’s Angus Young with his blues-based lead guitar. Annihilator is not that diverse but even more diverse than a lot of heavy metal bands in that we can have a love song one minute and an angry pissed off Slayerish, Exodusish influence song. Now we’re not as good as Slayer or Exodus ‘cos those are just part of the influences and no one is as legendary as Slayer or ‘Master Of Puppets’.

…On the so-called “heavy metal” revival
“If bands are jumping on the bandwagon of trying to dress “heavy metal” because they wanna get popular, even if it’s done for the wrong reasons it can actually work out good for us. This happened ten years ago, nu metal types, whatever that means, went a little heavier. Now they’re wearing Slayer shirts. They say ‘This is heaviest mother effing album we’ve ever done’ and then you realise, it sure must be as nothing you’ve ever done in your career has ever been heavy. It’s survival. That’s not what this music is all about. You end up thinking ‘Those fuckers, that should have been my band or some of my friends’ bands. Overkill should have got there. Testament should have jumped up to the next level. What the hell are these guys getting up there for? It’s fake. Then you realise, when that fake band jumps up there and sells 300,000 records, all their fans read the t-shirts they’re wearing onstage to be cool and they get on the internet and they research these bands, the Testaments and Exoduses, Annihilator, Overkill, all the bands that never stopped playing what they do and then you get the spin off. We benefit from the people who are dishonest about their music. Our sales, from 2007, went up and that’s never happened. Over time your CD sales are supposed to go down, they almost never go up, especially if you’ve been around for a long time. Testament are putting out some of their best records. Exodus are doing amazing stuff in the studio. Overkill’s last album is kickass and I think Annihilator’s new album is turning back and going in the right direction.”

…On breaking his homeland
“We have fans [in Canada] but there’s not many of them and it’s the way it is. Annihilator were, quote, traitors. We went outside of Canada and signed to a Dutch and New York based company, Roadrunner Records, so we were traitors. If we had signed directly to a Canadian label maybe we would have been hometown and country heroes but no one outside of Canada would have heard of us. It was Kerrang and Metal Forces in ’89 that helped make Annihilator, that gave us that shot. Kerrang actually came out, this is ’89 remember, saying we were ‘Canada’s answer to Metallica’, which is stupid but at the same time you can’t ask, in that era, for a better comparison for what was, at the time, a real hardcore, heavy metal, thrash metal publication.”

…On being optimistic about the new record
“How can you put a record out and sit here and say that this record is amazing? How can you know that? You’re the artist. You’re always going to think that. Whatever you say is just moot. How can you possibly say ‘Annihilator are one of the most original bands out there’ and then the second track sounds like you did a lot of drugs and put on ‘Master Of Puppets’? You know what I mean? Annihilator’s new record is honest. I didn’t hide my influences, I’ve never hidden my influences. And sometimes I think you get lucky and everything falls into place.”

…On the themes of ‘Suicide Society’
“I’m not educated, I don’t know anything about politics. I would just go through my normal life making music and notice things like what’s on the news, which is not necessarily what’s going on anyway. I knew the world was having some serious problems and I might have mentioned them in a song called ‘Stonewall’ in 1990. I was talking about environmental pollution, but I honestly didn’t know anything about it. Which there’s something wrong with. You’re just observing. I was looking for subjects [for this new record] that were bugging me or were interesting and one was spawned by a television commercial and the headline was ‘Nature doesn’t need humans, humans need nature’, or something to that effect, and I went ‘Hey, that’s a cool idea’. But it wasn’t like that I really believed or lived it, but then I started writing. I started writing pages of notes about what humans are doing to other humans and what humans are doing to nature and I got to page three and sat back, it was like a lightning bolt hit me, except a depressing lightning bolt. I was sitting there, not in tears but I was like ‘Are you kidding me?’ I had one of those life-changing moments where you realise how screwed up and bad everything is right now. You know we’re running out of gas and oil, you know the foods we eat are getting worse and worse with chemicals, you know we’re all addicted to this and that, you know the drug companies are giving us antidepressants and that 99 percent are not proven to work, they’re just billion dollar great ideas and you look at the ozone layer and extinction, and you can sit here and say ‘Wow, how pessimistic’, true, but it’s still going to hell right now. It was a 99 percent depressing venture to do that song. The one percent that was positive at least was the last line of the song which is that it’s still not too late to change.”

…On being back at the mic
“My singer Dave [Padden] left in 2014, we’re good friends, everything’s cool, he just said he was tired of touring and travelling. It showed in some of his singing and his attitude was kind of gone. Great guy, we talk all the time, but I was forced to think of getting a new singer and thought ‘Screw it’, went back and took vocal lessons, sang on the record and holy crap, I surprised myself and hopefully I did a good job.”

…On going back to the demo for inspiration
“[One of my favourite songs on this album is] ‘Creepin’ Again’, which comes from a demo I wrote that never made it to a record. For some reason I went right back to this song called ‘Gallery Of Grotesque’, on one of our demos that got us signed and I always loved it and thought I should record it. When I started writing I had that song in my head. You won’t be able to tell the similarities, it’s just the feel of it.”

…On being almost 50 but still thrashing like a maniac
“That will probably be until the day I die. I’ll probably be singing this stuff as an old man in a wheelchair, if I live that long. I would definitely still put on ‘Reign In Blood’.”