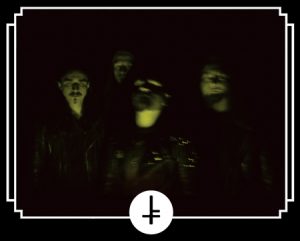 All the email said was: “THIS is heavy metal blackened by death from the UK. Black metal doesn’t need ‘saving’. It needs resurrecting.”
And attached two simple, unmastered MP3s that, despite their lo-fi quality ignited something deep inside. At once notes of Watain and Marduk, second wave buzzing, and, yes, an ambitious yearning to “resurrect” the flame weaved its way around a dank, decrepit atmosphere.
Something Winterfylleth said in Iron Fist #1 about black metal in the UK failing in its early promise to create some of the world’s most innovative and sinister music awakened the rage in the sender enough for them to send me such an email. And in return his music made me want to dig deeper.
The anguished scream at the end of the song ‘Through Transforming Fire’ was enough to entice me to open the portal into the world of Funeral Throne. I craved more.
“Listen at maximum volume,” I was told. “In darkness. Light Patchouli incense to welcome Saturn.”
I pressed play again. ‘Hypnotic Coils’ tethered me. Tendrils of Les Légions Noires-esque craft grasped at my throat, I was suffocated. This IS heavy metal blackened by death from the UK. Fuck!

I’m no stranger to Funeral Throne. At the behest of London’s premier promoters of black metal, StrataNael, I was asked to host the horde at my house after they opened for Watain in 2010. What followed was a partnership of misdeeds and magick, mostly at the bidding of their bass player and frontman M. So, still reeling, from hearing how intricate their new songs were, and eager to know what invocations had been cast to strike such blackened gold, we took communion and learned more of his art.

You said that British black metal doesn’t need saving, why?
“It was a reaction against what the music press is dubbing some UK bands at the moment. It doesn’t need saving because it’s not truly dying. It never went away. It needs resurrecting from this stasis by the fires of the underworld not some wistful Neo pagans.”

Are you an advocate of orthodox black metal? Or are you a fan of newer bands taking the template laid down by the elders and pushing it to its boundaries?
“‘Advocate’ is a strange term – I equate the truly ‘orthodox’ with honesty, conviction and a religious fervour, so in that respect I support it. I think in the past I was much more liberal with the definitions I used, but as time has progressed I’ve grown less tolerant, mainly because our ideas have been sharpened. I only really consider what we do/our goals when it comes to creating anything to do with Funeral Throne. We have ‘progressive’ elements in that we don’t sound wholly like Mayhem’s early material but I also don’t believe we push it to being something else entirely.
“There seem to be a lot of hipsters taking the name black metal, perhaps because it is perceived as being dangerous and the ultimate Brownie point in terms of counter culture. They want to cash in on the bloody image of the genre but in the same breath they dismiss the traditional aesthetic and symbolism, claiming it to be beneath them or even childish. If you play with the Devil’s fire, prepare to get burned.”

You’re not just a fan of black metal; you like noise, punk, occult rock, psychedelia – does that enter the musical pattern of Funeral Throne at all?
“This is true, but I think the attitude of some of these bands, or their honesty is more readily absorbed – more so than the actual sound they have. With that said we love the twin guitar harmonies of Thin Lizzy and Iron Maiden for example, and I guess things like that can come through. However, I can’t really listen to Funeral Throne from a distance and am quite unable to hear what others might hear in our sound.”

You’re from the “home of metal”, and when the city of Birmingham put on their recent exhibition celebrating the genre’s history did you get a sense of pride? Why do you think The Midlands spawns so many bastard bands?
“Being big Priest, Diamond Head and Sabbath fans, the museum (at least for a few weeks) was like Mecca. I can speak for all of us when I say we are obsessed with the bands from our area – proud is a strong word but I guess we can’t help feeling something. Their blood is our blood. Their frustration and need for expression is within us.
“The Midlands has doubtlessly changed much since the late ’60s, but instead of being noisy with the hammer and anvil of industry, now we are left with its silent spectre. You cannot go anywhere in the Black Country or Birmingham without seeing the shells of once thriving buildings. This landscape has affected us in the same way it did Tipton and Iommi. It’s still bleak, but we were born in a graveyard.”

You’re an artist, right? Explain your art and how has that played into your role in black metal?
“I work across media – be it in illustration, giving performances in gallery settings, or gigging with my bands. Every thought that I want to use artistically has be put across in the most eloquent way possible – sometimes it is through music but in the past it has been through installation works or even Beuys-esque performances.
“The thing that being an ‘artist’ has taught me is that you need to have standards – this is of sole importance. There is so much shit out there but there is also so much potential. It is astonishing what some people will allow to be released in their names. You should never feel like you have truly completed something – you should always struggle to leave it behind. I think if you feel you have reached the absolute end of a project then you are doing it wrong, you just have to be able to let it go at some point.”

So, what’s next for Funeral Throne?
“‘Threshold’ is the title of the new album. It’s a word that has come to symbolise so much. It represents a very literal crossing of boundaries as well as a farewell to chains. From personally finding a foothold on a spiritual path to flying to Germany to play our first European show, ‘Threshold’ is powerfully symbolic to us. The album artwork also manifests a few facets of the word. The more we seem to do and the more new ground we cover, the more meaning the title takes on.
“We’ve worked very hard for five years on this album, scrupulously going back to tracks to perfect them. The album is thus a document of all the energy, sweat and each and every experience we’ve had. We recognise that an album isn’t an ending, rather a documentation of an ever-evolving organism and a specific point along a journey. That journey being our own Left Hand path.”

What the hell does Heavy Metal Blackened by Death mean?
“Everything from Dio-era Rainbow to [the stained glass artist] Harry Clarke has been an influence. We know pretty clearly what Funeral Throne means to us and how we want to represent it. When it comes to the sound of the new record we knew early on that we wanted no triggering on the drums and to make a stance against plastic black metal that dominates the world ‘scene’. What we have created with [producer] James Walford [Anaal Nathrakh] is heavy and aggressive but also dynamic and truly heavy metal sounding record. Sabbath, Priest etc are in our blood, and we wanted to create something with this in mind. This is, as we are naming it: Heavy Metal Blackened by Death!
“We’ve had some interest from labels but we want to send it out everywhere to see what happens. We feel so passionately about this release that surely someone out there will hear it and dig it and understand what it means, especially within the context of the UK. It sounds unlike anything else from this country. We want nothing else than to be Funeral Throne. We’ve sacrificed a lot for each other and we want to play live and promote this thing to the ends of the earth.”

Finally, you recently played in Germany? What did you learn about Funeral Throne, yourself and the act of breaking out of your comfort zone?
“Germany was our first show outside of the UK. It was a great experience, the venue reached capacity and it was flawlessly organised (after all, they are German). The crowd was ridiculously responsive, compared to how it can be in this country for lesser-known bands. Some maniac travelled across the country just to see us and that was a special feeling. Knowing that we can have such an effect has caused our hunger to grow. Not even oceans can stop this band anymore and this sense of liberation is intoxicating.”