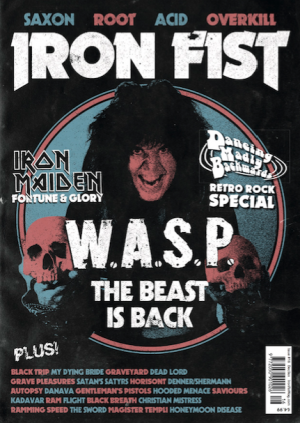 It’s sad that Iron Fist #16 is being released days after learning about the passing of Sir Lord Baltimore’s John Garner. He founded the band in 1971 and many would argue that it was their debut ‘Kingdom Come’ that ushered in the genre of heavy metal. Whoever lays claim to that title is irrelevant, as SLB undoubtedly inspired a whole generation of bands and continue to do so, as proved in this issue’s special, lovingly called Dancing Madly Backwards after a song by SLB’s esteemed colleagues, Captain Beyond.

In this section we look at the new albums from Horisont, Gentleman’s Pistols, The Sword, Kadavar, Graveyard as well as chat to some of the new bands ‘Pumped Up’ on the sounds of SLB, Sabbath, Purple, Captain Beyond, Grand Funk… the list goes on. If it wasn’t for these bands – old and new – Iron Fist would not exist. As Graveyard said so perfectly, “You think of us as just a throwback band, but we don’t consider ourselves being that, we consider ourselves playing new music for a new generation.” The same could be said of Iron Fist! And we’re now doing that in the new-fangled electric circus too.