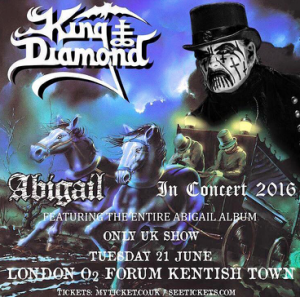 King Diamond will return to the UK next year, on Tuesday 21st June at London’s O2 Forum Kentish Town. And as part of their live set, they will perform the ‘Abigail’ album in its entirety for the first and possibly last time ever in the UK. The band have promised that “This will be the most ambitious theatrical horror production by King Diamond to date. Both sonically and visually this will take the band to a whole new level.”

For a taste of what to expect check out this performance from last summer’s American tour:

Tickets are on sale now at www.seetickets.com

And just if you thought you were getting no presents for Christmas Metal Blade have just re-issued ‘The Spider’s Lullabye’ on CD and vinyl, so you can treat yourself. The CD will be released as a double-Digi-CD featuring a bonus-CD that includes the rare and previously unreleased demos for the album. The LP comes as a double gatefold vinyl including all the bonus tracks as well. Get your copies of “The Spider’s Lullabye” and “House Of God” from Omerch