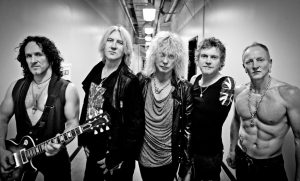 “You don’t really have to make albums anymore, not in this day and age. They don’t really serve a purpose. A lot of big bands don’t really need to do them as they can just tour.

“We wanted to record a single but because we had no pressure, no record company executive, no business agenda, we actually found that we had this freedom that just started flowing. So, instead of coming up with one or two songs, we had 12 on the go.

“Usually when you do an album there’s a concept to it. With this one it was anything goes. Queen used to do an album and someone would come in with a song – whether it was John Deacon or Roger Taylor, Freddy obviously, Brian – they’d all come in with something very different but it all worked as a Queen album.

“So, that’s what happened here. And it is versatile. I came up with this bass riff. I was just singing it and I thought, ‘well, this is a bit funky’. Normally we wouldn’t go there. I was listening to Billy Jean by Michael Jackson and I done the demo, got the music together, played it to Joey and he loved it.

“So, instead of an album we had concepts for each song. Each song was its own project and that was something we hadn’t done before. It was liberating. We didn’t have to please anyone, it was just pleasing ourselves, hence the self-title. I said, ‘We’re not making this for anyone else, except for us and so let’s call it ‘Def Leppard’. We’ve never had one before.

“Everything about the record was easy like that. There was no ‘Oh I don’t know about that’, ‘Perhaps we shouldn’t do that’, ‘Oh that’s not gonna fit’, ‘This is a bit funky’. Every song had that thing to it.”

Eleven albums and how many decades in, were you not worried that people might not take to such a diverse album? There are some real hard rock moments on this that will please fans of your earlier sound, and some really off-the-wall songs that do, you’re absolutely right, remind of Queen or late Zeppelin.

“Nope, we didn’t give a shit. This is actually our album. It wasn’t like a business man making the decisions. Since, really, the end of the ’70s the music industry hasn’t been an industry, it’s been a business. Before that you had Jimi Hendrix, Led Zeppelin, The Stones, The Beatles, Bob Dylan, James Brown, all these people did exactly what the fuck they wanted, they didn’t really have someone else’s agenda in mind.

“Queen even, when they started off, they had this idea for a sound and it wasn’t affected by anyone else and I think what’s happened as we’ve got into the industry. It’s become more business and less art, so it was really refreshing and we didn’t give a bollocks what anyone thought. This is us being artists. This is us doing what we set out be. This is why we started. And it was just amazing, it was just a freedom if anything.”

You joined the band in 1982, and the band were just about to do their breakthrough record ‘Pyromania’. So in a way Def Leppard had already found their sound and were already part of that machine you just talked about. Were you sorry to have missed out on those early days of freedom the band had? Was the last time you had that level of creative freedom when you were playing in your pre-Leppard band, Girl?

“When I joined Def Leppard we were still playing clubs and theatres and were an opening act in America. It blew up when we actually released that album and went on tour. In fact I was playing the same gigs as I was playing with Girl. My first gig with Leppard was The Marquee which I’d played like a million times. Then we done a British tour, which wasn’t very well attended and I played all them same gigs, so when we got to America, that’s when it took off. That’s when it went really weird. That was probably the most exciting period of any of our lives. All of a sudden we were One Direction, it was so quick.”

Every Leppard album since 1992’s ‘Adrenalize’ has been self-produced, but it’s taken until now to produce “your” album. Did you not have that creative freedom before?

“We did what we did but we actually realised we hadn’t. I mean it was great, all the stuff we did with Mutt [Lange, uber producer who also worked with AC/DC and Foreigner] was brilliant. We had a plan, well he had a plan. We were just part of the thing, but we were loving that, we were trying to create something different.

“And it was very different with Mutt, because he wouldn’t let anyone bully us. He wouldn’t let record companies or producers come in and affect us. But when we actually were out on our own there were sharks in them waters, and that was what it was like. So, this was the first time in our career that we were able to do this.”

Almost 40 years on since Def Leppard began and you’re still putting out albums and touring. Most of your peers are bowing out or slowing down, is that not tempting? Why have you not thrown in the towel yet?

“Bunch of reasons really. We’re having an indian summer as a career. Look, Labour Day is when the kids go back to school in America, it’s suicide to tour after that but we’ve been selling out every show since Labour Day. We just played Salt Lake City on a Monday night and there was 20,000 people in. We’re having this thing that’s a bit weird; everyone is loving the new stuff and there’s so much we have to say, hence the new album. There’s so much to do still. I think what happened to a lot of bands, they’re not really into it anymore. They just tour and they’re working for that business agenda, and we’re not. In a nutshell. There’s so much fire left.”

You mentioned The Marquee earlier, it’s such an iconic venue for our readers and sadly now a pub in an area of London where music venues and being demolished, turned into wine bars or boarded up. It’s so sad. What do you remember of playing it?

“It was brilliant. I’d read about it and heard about it for years. The Pistols, Led Zeppelin, Stevie Wonder, The Who, The Beatles, The Stones, everyone played there and it was really special. You’d hang there, it was a great vibe. It was funky, it was nasty, it was just great, a centre. You don’t have that anymore. There were loads of places you could play but that one especially. When I was in Girl we used to do residencies there, play there every week for a month and it was just really cool. I’m from London, so for me it was even more special. I loved it. It was part of the scene.”

Coming from East London, what do you remember of that nascent NWOBHM scene? You grew up with Paul D’ianno, right?

“Yeah. I’ve known him since I was six-years-old. When all that thing started, it wasn’t really a scene, no one thought there would even be a new movement, or whatever you wanna call it, because it didn’t really seem like that. It seemed like a reaction against something else. Punk had come out but then punk had got stale, and there was all these naff bands that didn’t have the fire that The Clash had or The Damned or The Pistols had, and it got really lame.

“Then people who liked rock music, who liked Zeppelin and didn’t want to play 20 minute songs all of a sudden made this little hybrid. Two minute songs and a bit of that fire, based on hard rock.

“Every movement comes out of something else. It’s influenced by something. It might be out of something negative but that’s why it exists. There weren’t many good bands, but there never is. There’s like one or two, Iron Maiden really and I guess Motörhead were part of that, but Def Leppard wasn’t really part of that because they looked different and sounded different. It was just a time and a place more than anything else.”

You’re headlining Wembley Arena this weekend and there is a lot of talk about how we won’t see many rock bands that will be headliners of that level in the future, do you agree?

“It’s changing. It’s hard. The industry is run by business men, bankers and lawyers so it’s hard. You’re gonna have to have a reaction against that. Even while music is obviously changing drastically, with a wifi connection you can just stream it.

“And I know a lot of kids are buying vinyl and it’s more not because it’s vinyl, it’s because it’s part of a club, an identity. I think we’ve seen the golden age, but they said that about big band, about rock ‘n’ roll when it first came out.

So many of Iron Fist’s readers are in their 20s and are going back and listening to ‘Pyromania’ and the even earlier Leppard albums instead of what the radio is feeding them. They have the patches, the original t-shirts they found on eBay, the LPs on vinyl, there’s such a lot of love for classic rock bands, maybe that’s the reaction we need?

Def Leppard play Wembley Arena with Whitesnake and Black Star Riders on Friday December 18. You can read about Whitesnake’s early days in Iron Fist issue 14, which is available from our online shop