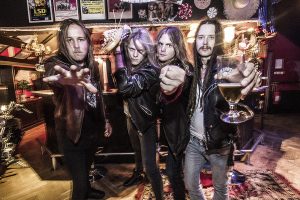 One of our favourite new bands of 2015, Saturn, have released their first video for ‘Rokktori’.

The song came from their debut album ‘Ascending (Live In Space), which came out earlier this year on Rise Above Records.

The band said on their Facebook page: “We’re releasing our first music video soon. We released the album last summer but fuck it, better late than never right?”

In issue 12, Iron Fist writer Marek Steven described the Swedish band as “Not a carbon copy of the multitude of other new bands repeating the heavy metal blueprint, Saturn have the chops to back up their groove and swagger”.

The band told us that “We are Saturn. We play Space Metal! We share the same passion for old school rock ‘n’ roll and heavy metal, primarily from the ’70s, but also older progressive rock and thrash. Firstly, we are friends and a band second, it’s all about having fun.”

Of the album, bass player Oscar Bo Valentine Pehrson said of the title: “It is semi-live. All instruments are recorded live in one take. ‘Live In Space’ is a bit of hint of this and a small joke on our part. Like I said, its all about having fun. However, I would not have anything against recording a gig on Mars as soon as we start to build a colony over there.”