MOTÖRHEAD: WHAT WE LEARNED FROM LAST NIGHT’S MEMORIAL 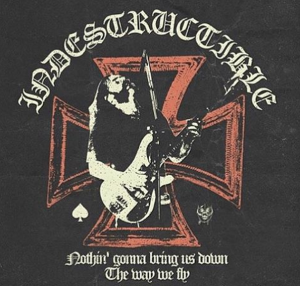 Last night was surreal. Watching a funeral in a pub? Cheering, whooping, and laughing (a lot of laughing actually) while glued to a big screen TV. What was supposed to be a sombre affair turned to belly-aching chuckles with every wild story or dad joke but you couldn’t resist the devil’s grip of emotion either.
The weirdness of watching a webcast memorial as you would a footie match left me reeling but I was so glad I went. Some of the Iron Fist team opted to watch it at home alone so they could let it sink in privately, some chose to not watch it all believing it to be voyeuristic bordering on the tasteless, and some threw parties in Lemmy’s honour, but Jim Martin and I decided to brave the Holloway Road, London’s less glamorous Sunset Strip. As we gathered in front of the screens at the 12 Bar I realised in that instant what impact Lemmy had on such a cross section of music lovers.

When he passed away on December 28, I couldn’t find the words to write a tribute. But that alone felt irresponsible. Here I am, editor of a magazine named after my favourite Motörhead song and I couldn’t muster the will to broadcast the minutiae of both of his career and my sadness into the cybersphere. I watched as social networking became wall to wall celebrations of this adored icon of rock ‘n’ roll, but the tributes soon became overkill as other music magazines and online media outlets turned his demise into a fevered madness. My love for Lemmy, killed by death.

But I found myself in the middle of the 12 Bar at 11pm on a Saturday night, listening to Lemmy’s son Paul read the most moving testimony to his friend and father, and none of that mattered anymore. What mattered was that people, from such at-odds walks of life were there for the same reason. We were as united as the last time I watched a spectator sport in a pub, the ’96 UEFA semi-final, watching those gut-wrenching penalties steal our hopes and dreams.
Someone I hadn’t seen for months consoled me and let me drink some of his Guinness. My best friends who I don’t even talk about heavy metal with gave me a squeeze as Rob Trujillo told that wonderful story about Lemmy asking Joni about ‘Court & Spark’ as they knew what they meant to me. I shared a “Lemmy” with friends from Sweden and LA who happened to be in town for the weekend and perhaps wouldn’t have even seen were it not for this momentous occasion. I got a comforting hug from one of the editors at Metal Hammer when they saw me cry when Ute, Motorhead’s incredible PR manager, talked about how she’d always protect him from crazy media requests. People from bands, fellow music journalists, friends and complete strangers raised glasses and shared smiles with each and every moving tribute. I was glad I was there so I could see so clearly how this one man touched every one of our lives. But it was still weird. Fucking weird. We’d just perved (it felt pervy to me) on his funeral. The last time we all joined in such unified and morbid grief was over Princess Diana and that was frankly bonkers.

I did the duck and slide when the sound cut out for Dave Grohl’s speech, I didn’t want to say goodbye to my friends and certainly didn’t wanna “drink more for Lemmy” as the gathering throng seemed to echo. This unified excuse for getting wankered seemed so forced; for fuck’s sake, we’d only just gotten over the horrific annual drunken bacchanalia of New Year’s sodding eve. And to boot, I was stone cold sober as I was driving. “Leave the car here, it’s what he would’ve wanted”, I heard, oh, about every single one of my friend’s say.
Is it what he would’ve wanted? Is it really?
The night had a touch of the loutishness about it. No class. In fact, “shut up, you talk too loud” was a common theme. It’s a pub, people were ordering drinks, chatting to their mates and people were screaming for silence. When the sound kept cutting out staff were abused as if it was their fault. “It’s disrespectful to Lemmy” some harridan kept screaming every time the webcast buffered, as if this was her first ever experience of the fucking internet. And I listened as almost every single person at the memorial service talked about Lemmy’s graciousness, his gentlemanliness, his kind and polite nature, his patience and his generosity. I looked around and thought, “Are you even listening to this?”

I had the honour, the absolute honour, of interviewing Lemmy a couple of times and met him briefly on a few occasions too and he was always courteous. He called me sweetheart in that old-fashioned geezer kind of way that isn’t meant to offend. You can imagine him holding a door for you, you know what I mean? I spoke to my mum about it today and she, at 61-years-old, doesn’t really know who he, apart from to say, ‘Oh Hawkwind, I think I saw them’… which probably means she did. But she asked about his life and where he was from and when I told her his whole life story, she reminded me that, well absolutely, men of that time, growing up in that area of Great Britain, they were raised with manners and, yes, class. Heaps of class. He was a wild rocker, that is not doubted, not for one second, but I also had a sly smile at the idea of him saying to my friends, ‘Let the lady go home if she wants to go home, she doesn’t want another fucking drink’. Does that sound crazy? I hope not. It made sense to me.
Telling my mum all about Lemmy was strangely cathartic. It was the loving tribute I was meant to write for Iron Fist’s website but done over a cuppa and some toast. And then I felt like I didn’t need to write it anymore. This thing I was putting off and trying to desperately to find the words for was suddenly unnecessary. Lemmy was loved by so many and for many different reasons and you didn’t need me to tell you how or why. As I remembered the night before and recalled the faces my lack of obituary made sense to me. The faces were of die-hard Motörhead fans with whom our nights would always descend into some whiskey-soaked ‘Iron Fist’ soundtracked anarchy, but also of friends who perhaps hadn’t listened to Motörhead in years but his death made them dust off ‘Ace Of Spades’. We were all united in our slowly dawning realisation that Lemmy no longer existed. And then, the real bomber, that Motörhead no longer existed.

I didn’t need to write up his life’s story on our website. Our readers mostly already know it. Or perhaps it doesn’t matter. You can get everything you need to know just by playing his records. You can read ‘White Line Fever’ or watch Greg Olliver and Wes Orshoski’s brilliant documentary. You can watch the memorial service again on YouTube to fathom exactly what Lemmy was all about. What matters is that he’s gone and he is completely irreplaceable.
Those musicians who spoke last night at the memorial know that too. A light has gone out in the heavy metal and punk and rock ‘n’ roll and prog and I don’t know, fucking avant jazz world for all I know of his astounding wide-reaching appeal. We all feel a little more empty. The laughs soon stopped once the webcast was turned off and ‘Overkill’ blasted out over the 12 Bar’s PA. He’s gone. Lemmy’s gone.
But you know what? We’re not. A friend said last night; “I don’t wanna live in a world without Motörhead”, and I know what he meant, but I disagree. Let’s live in a world without Motörhead. Because Motörhead did exist and no one can take away that impact they had.
Last night hammered home how he was responsible for the formation and certainly continuation of bands such as Metallica, Judas Priest, Anthrax and Guns N Roses alone. And he’s responsible for every band featured in Iron Fist. EVERY. BAND. In fact, a few days before his death I joked on our Instagram page about a CD I’d been sent with a note that simply said “They like Motörhead”. That PR person knows how to get through to me. That’s all it takes. No bio, no photos. How to impress the editors of Iron Fist in three simple words. And that is what galvanized me to write this today. It’s personal and maybe slightly non-sensical, but it’s what matters to me.
Motörhead existed so Bombus and Cauldron and Candlemass and Mourning Beloveth and Vastum and Ketzer and Degial and Tarot and Tyrant’s Kall and Brimstone Coven and whoever else is in our next issue could exist. Someone asked me if the next issue of Iron Fist will be a Lemmy tribute and I said yes and now I’m kicking myself because what I should have said is that Iron Fist has been a Lemmy tribute for 16 issues and will always be a Lemmy tribute. No, I won’t take those features of the aforementioned bands out and fill the pages with Lemmy obituaries because that’s is absolutely not what he would’ve wanted.
If you play fast and loud and with no compromise then we will proudly write about your band. Will we do a Lemmy tribute? Of course we will, but we will also do it as we always have by covering the bands that “like Motörhead”. If you don’t want to live in a world without Motörhead then that’s fine, but I do want to live in a world without Motörhead and that’s a fucking amazing world because Lemmy taught us how to raise hell and we’ll never stop.