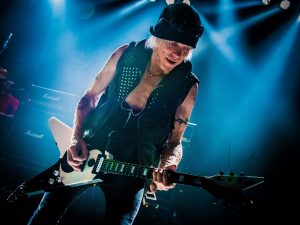 What started as a solo project in 2011 with friends Pete Way on bass (UFO), and Herman Rarebell on drums (ex Scorpions), with guest vocals from Robin McAuley (ex MSG) and Doogie White (ex Rainbow/MSG etc), Temple Of Rock has become a band in its own right, with Herman, Doogie and Michael joined by formed Scorpions colleague Francis Buchholz on bass and Wayne Findlay on guitars and keyboards. Michael has big plans for Temple Of Rock and encourages you all to come worship at it.

Hi Michael, thanks for talking to us, so tell us Temple Of Rock is about to head out for a nine-date headline tour of the UK, are you excited?
“Yes, the UK is always very special. This is where it started for me, all the way back with UFO. I was 17-and-a-half years old when I left the Scorpions and joined UFO and I went straight on tour with them. The first gig I remember was in Newcastle, then Sunderland, Glasgow, and then we played all the universities and then all the way up. Then it was just a continuation of establishing ourselves, year after year there was a new album out, a new audience, so we really created a big fanbase. You know, that’s just my whole career, in my basic time of development, from the ‘Phenomenon’ album through to ‘Strangers In The Night’. That basically all happened when I was in the UK and now with Temple Of Rock, the past few years we have played here, it’s so special to me.”

You have such a long career, starting in the Scorpions when you were just a teenager and joining UFO when you were 17, and then going on to have an enviable solo career with MSG and now Temple Of Rock, who are you expecting to see at these concerts, is this a mix of UFO fans, Scorpions fans or younger fans who might have discovered you on the recent tour you did with Judas Priest?
“In the my middle years I was a bit laid back and I experimented a lot. You wouldn’t see a lot of myself but since the first Temple Of Rock album or let’s see, at least, with this line up with Francis Buchholz and Herman Rarebell, the original ‘Rock You Like A Hurricane’ rhythm section, we are basically getting all our fans back that maybe in the middle years I lost somewhere as I was living in The States for a long time. So, it’s really exciting to see how all the old fans are coming back and new ones too. It’s just a great audience in the UK as they know what rock and roll is all about. At least the music that I make, the era of my generation of rock.”

You’re living back in England, right, is this your home? What made you settle here?
“So many great artist came from the UK and this is the country that inspired me. When I heard Jeff Beck and Jimmy Page, this is what I wanted to do and so this is where I wanted to live. When I was in the Scorpions, I told them any time an English band would ask me to join I would immediately do it as in Germany, people didn’t understand what I was doing. Whereas in England it comes from here, so I feel at home here with my music and feel very understood. I can feel that people really understand and enjoy what I’m doing and it makes me feel very happy. Plus lately I have so much fun being on stage which is a miracle because for many years I was not enjoying being on stage.”

Why is that? You’ve been professionally playing since you were 11 years old, do you not enjoy playing live?
“There was too much stage fright involved and but since 2008 or 2009 all of a sudden there was an urge to be on stage. I had no idea what happened. It was my middle years of developing on a personal level and spending a lot of time experimenting and learning about life and for some reason now, I don’t know, maybe I’ve been preserved for this time. Also so many people are passing away and I want to put my generation of rock to the foreground again and celebrate the amazing era of this generation that started for me with bands like Led Zeppelin and Black Sabbath. That’s what I fell in love with.”

What is so special about this era of music that people, especially younger fans these days, are so drawn to?
“I call it a generation of handmade rock because there wasn’t any computers when we developed and it was all had to do with developing your art, your tool, your guitar. A lot of new people, younger people are coming [to this way of thinking] too. I think this is the cycle, it’s as I used to say, celebrating the roofing of this Temple Of Rock. Of my generation’s Temple Of Rock. It’s all about England in the first place for me, and here we are doing another tour.
“We played with Judas Priest just in November and it was amazing. We really had a great time. It was kind of fun because it was a very short set, we only had 45 minutes, we didn’t do any soundcheck so we’d never see what kind of stage we would be entering. It was funny because you had to figure out on the spot what you’re gonna do with that stage, sometimes there was a big space in front, sometimes there was no space. Herman was always on the floor playing, but it was a great little tour and so we are really looking forward to do our headline tour now.”

On the recent Temple Of Rock concerts you’ve treated the audience to songs from both UFO and Scorpions, will this always be part of your set, do you wish you could play just Temple Of Rock songs? Three albums in now, you certainly have a lot of pick from.
“We have to make sure it’s a great combination of classics and new songs, enough for people who want to hear the new stuff and enough for the people who want to hear the classics. Of course new old classics, not the ones we played last time. We will always have a lot of tracks to choose from and so that makes the Temple Of Rock. Basically the idea behind it is a summit of my past and so that past is part of it and Temple Of Rock is the current, what we’re doing now. We’ll combine this and that gives you a good combination of songs from then and now and it’s very entertaining.”

Amazing, we can’t wait to hear ‘Fly To The Rainbow’ (ahem), what’s next for the band?
“‘Good times’ and ‘Rock City’ has been released as a double A-side and has just been played on Planet Rock radio, that’s our new single and then of course we play a headline gig at Giants Of Rock on January 31 and we finish our Scandinavian tour in February. Then it’s time for Temple Of Rock to find their own record deal. We have used my solo deal as a platform to establish TOR for the last two albums, well three albums, but with this line up, two albums and so we are going to do something for a new record deal for Temple Of Rock, one that is suitable for this band which will bring the band to the next level. ‘Bridge The Gap’ was the entry, ‘Spirit On A Mission’ brought us to the next level and with a third album we should be ready to have Temple Of Rock on its own feet, with its own unique sound. We are almost there but we want Temple Of Rock to have its own identity and so that’s what we are working on so hopefully. We are going to releasing a live DVD from Madrid in April and then we’re hoping, depending on how soon we find a suitable record deal that we will be releasing a new CD for 2017.”