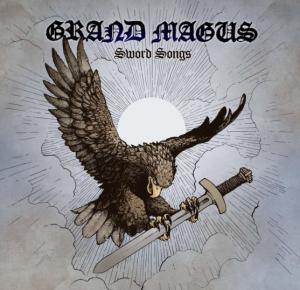 We can also reveal that the tracklist is as mythical and steeped in Norse lore as we would expect from the wolfpack:
1. Freja’s Choice
2. Varangian
3. Forged In Iron – Crowned In Steel
4. Born For Battle (Black Dog Of Brocéliande)
5. Master Of The Land
6. Last One To Fall
7. Frost And Fire
8. Hugr
9. Everyday There’s A Battle To Fight

The band have also announced they will do a cover of Deep Purple’s ‘Stormbringer’ for the bonus tracks on a special edition version.

Grand Magus recently announced that will play at the UK’s Download Festival and are also set to appear at Rock Hard Festival, Metalfest Open Air, Hellfest, Rockharz and Summer Breeze.