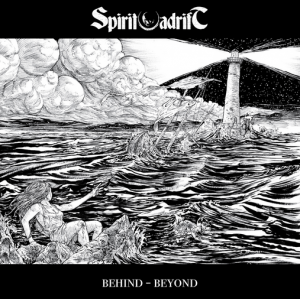 Conjuring the shades cast by Warning/40 Watt Sun and the masters of the heavy riffs from Black Sabbath to Pelican, ‘Behind – Beyond’ is a two-song EP crafted by musicians with a meticulous adoration of the more otherworldly aspects of doom metal’s 46 year reign.
“The ideas behind Spirit Adrift, and the songs themselves, materialised on their own,” explains vocalist/guitarist, JK. “Our lives had become disastrous in the years leading up to the formation of the band.
“Not to sound too melodramatic, but the discovery of these songs truly coincided with our own self-discovery and healing. The writing process was natural, maybe even unavoidable. Many of our biggest artistic influences, Tony Iommi for example, have claimed that they aren’t responsible for creating their art, they are simply unearthing something that’s already there, lingering in the aether. We feel this is the case with the songs on ‘Behind – Beyond’. They came out of nowhere. It’s as if they found us, rather than us finding them.”

It’s a tale as old as time, but we’re glad these songs found their earthly home. “Doom metal is known for being tragic and dark, so the lyrics came easy, considering the state of mind I had been in leading up to the writing process,” JK continues of the atmosphere swelling throughout the EP.
“We believe that the most powerful music, genre aside, comes from a place of honesty. I’m communicating somewhat metaphorically through most of the record, but the underlying subject matter is basically a confessional. It’s painful, but I had to get it out.
“There’s hope there too, the best way to deal with the horrors of life is through unrelenting positivity and constructive action. I dedicated my life to playing music because of the impact that bands like Black Sabbath, Jimi Hendrix Experience, and Metallica had on me when I was a teenager. Their music gave me an escape from everything that was bringing me down, and it inspired me to try and create something that could give others that same feeling. If Spirit Adrift can make even one person’s day better, or inspire someone to pick up an instrument, then it’s all been worth it.”

You can pre-order ‘Behind – Beyond’ via Amazon here